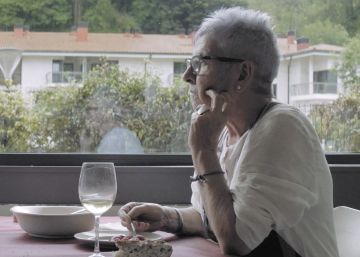 The writer Francisco Ayala said that "there is really no man who has historical memory" because "nobody remembers nor can remember what happened outside the scope of his own existence." The things that happen happen to specific people. And only the memory of these people is able to give an account of how a particular event was experienced. For example, one of the murders of ETA. On July 29, 2000, Juanmari Jauregi was in a bar in Tolosa when two gunmen from the terrorist organization shot him twice in the neck. His wife, Maixabel Lasa, remembers that that morning when he said goodbye he told him that he had dreamed that he was being killed.

On Thursday Movistar + premiered Zubiak, the documentary directed and written by Jon Sistiaga and Alfonso Cortés-Cavanillas, who participated in the Made in Spain section of the last San Sebastian Festival and that serves as a portal to the series ETA, the end of silence, which develops in six more episodes, and already in the hands of the first of them, that complex plot of pain and rage and pure nonsense that launched that criminal organization. The word becomes, after all, the only instrument through which it is possible to sew wounds that the fanaticism of a few opened irreparably. Everything comes together in Zubiak so that in the last stretch of the film, and face to face, the wife of the one who was killed converse with one of those who committed the vileness of killing him. Maixabel tells the exetarra Ibon Etxezarreta that they are the ones who have repented, the biggest delegitimizers of the use of violence. The road continues. Much remains to be done, new generations arrive, we will have to explain what happened and that is what Zubiak,of the desire to understand and the eagerness to explain how what happened happened. In the documentary there is not so much the will to find the historical and political and social keys of ETA terrorism, as to listen to what happened inside, inside the murderers and the victims. That is why it is especially revealing that many of those who speak simply by the first name are introduced. It is neither the politicians nor the journalists nor the terrorists who are explained: it is Ibon, Maixabel, María, Gemma, Carlos, Gorka, Jesús, Xabier ... who take the floor. Men and women, who scratch their memories to try to understand the incomprehensible. That spiral of violence, the shots, the blood, the fear. The infinite pain

There is a table in a gastronomic society, and dishes, and wine and bread. Ibon tells Maixabel that forgiveness has not asked him because "what we have done is unforgivable." She replies that he can't tell her if he forgives him or not. But what is being put on the scene in this intimate episode, in line with a conversation, is what Ibon calls "the link." The murderer is forever linked to his victims. And the gesture of those who took the step and regretted it is the one that opens, there at the bottom of that road that still remains to be traveled, a remote hope of effectively turning the page. Your mother had no idea where you were, Maixabel tells Ibon. And he also explains that he prefers to be the widow of a victim than the mother of a terrorist.

Ibon's story is now able to rebuild his own life. What the movie is about, and the series, is the end of a long silence. “One thing is to recognize the victims and repair the crimes", historian Santos Juliá wrote, "another very different instrumentalize the past to conquer it is not known what kind of hegemony with the purpose of imposing a public and institutional historical discourse from parliaments and governments." Maixabel recognizes Ibon for his tremendous courage. Is right. Without that enormous bravery - "we were wrong", "what we did was wrong from the beginning" - there is no way out of the dark labyrinth of hatred and destructive rage in which ETA submerged itself to poison a whole society. Neither hate nor resentment: that path chosen by some of the victims is surely the only way.