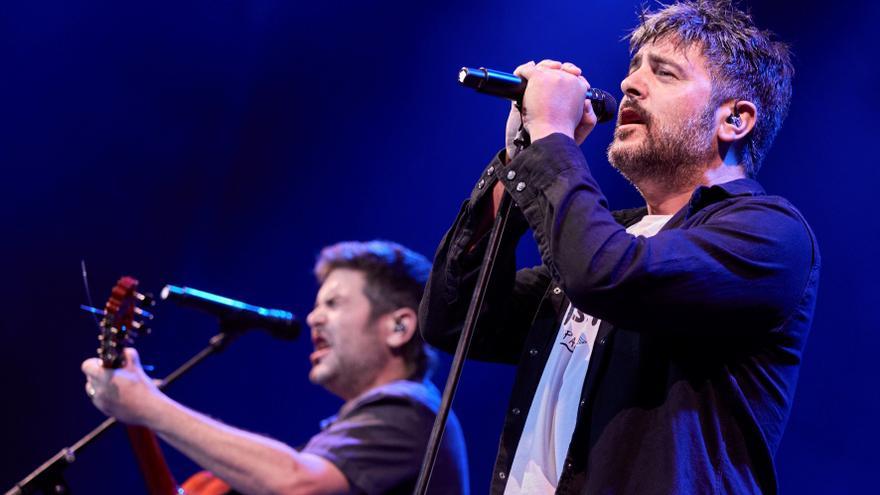 The brothers David and José Manuel Muñoz have offered two hours of recital in which they have reviewed their greatest hits, such as “Vinto tinto” or “La raja de tu fallo”, mixed with songs from their latest work, “Fuego”, such as “ The last line ”or“ I’m not crazy ”.

“We see through the eyes of the people that they want to have fun, to enjoy the concert, life, culture, the things we did before the pandemic,” the two singers admitted in an interview with EFE. to go on stage at the festival organized by Clipper’s Live and promoted by CaixaBank.

And they were not mistaken: as soon as the loudspeakers announced that the concert was about to begin, the entire audience began to applaud enthusiastically.

“Tu calorro” and “Vino tinto” were the first two songs of the night. “We will play very old songs, others not so old and others new”, David has indicated at the beginning and the public has responded with a long ovation and without stopping dancing all the songs they were presenting.

With more than 20 years of careers, the two brothers have consolidated their own style that mixes Catalan rumba with countless genres and sounds, and that has made them sell more than 5 million records around the world, especially in Spain and Latin America.

Their tenth album, “Fuego”, was released in October 2019, but shortly after starting the tour, the coronavirus arrived.

“We were left with a coitus interruptus album: it froze for a year but it seems that the flame is still alive,” they joked after playing the song that gives its name to the new album, “Fuego”.

In fact, throughout the two hours that the concert lasted, the two brothers have not stopped sharing confessions, anecdotes and stories with the public that filled the stands of Cap Roig and that weeks ago sold out all available tickets.

“I was in a bar, reading the Sport and at that moment the blonde entered. He came over and I say … hell, if she’s my wife, she’s dyed! “They kept joking to introduce the song” Partiendo la pana “.

“We always do what we like, we do not sell ourselves to any fashions, we do what we can do”, they made clear in the interview with EFE, in which they have described reggaeton as “the music of the devil.” “With four drinks, we used to like it but after listening to the same rhythm and sound for 10 years … it’s horrible,” they confessed with a laugh.

The vast majority of festival goers were unconditional fans of the people of Barcelona: they knew almost all the songs from cover to cover, especially classics such as “Vacations”, “Sleeping pills”, “El del medio de los chichos”, “Ya I don’t remember ”or“ I’m short of breath ”.

“We would like to dedicate the following song to the working class, the one who gets up very early to go to work, who goes on the subway, to the bars, who talks about their problems,” said David and Jose added: “And also dedicate it to all the toilets and those who were in the first line of fire, to the butchers, to the fishmongers… ”. It was the dedication of his song “Brake pads.”

But undoubtedly the most applauded and celebrated songs have been “La raja de tu fallo” -the theme that made them known and raised them to stardom-, “Fuente de Energía” and “Como Camarón”, which has been chosen for end a very special concert that has made the castle of Cap Roig tremble.

The festival continues until August 21 with artists such as José Luís Perales, David Bisbal, Aitana, Morat and Hombres G.