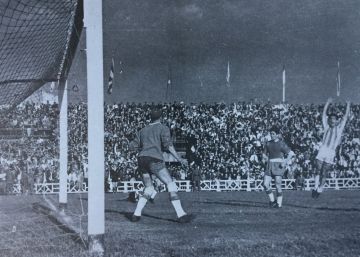 Every time Espanyol faces Valladolid, a bitter memory assails the old parakeet fans: the decline of 1962. Until then, it belonged to an exclusive club with Madrid, Barça and Athletic. Founder of the First like them, he had never come down, nor did he see such a possible thing.

Already the 60-61 League was a warning: finished tenth. Sarriá was small and uncomfortable and some proposed to buy the old Las Corts from Barça. Barça had moved to the brand new Camp Nou in 1957 and in Las Corts played the Count. For Espanyol it was ideal, but a strong sector repudiated the idea as humiliating.

There were also two lines regarding team design: a sector, to which Pablo Porta belonged, advocated patience, making players and thinking about the future. Another, which prevailed and convinced the president, Olivares de la Riva, was in favor of signing sound names that would attract audiences. Thus, for 61-62, Czibor arrived, a genius at Honved, then a nuisance at Barça; Carranza, an Argentine whose goals led Granada to the 1959 Cup final; Rial, veteran attack partner of Di Stéfano, already entered years and weighed down by injuries; and Gordejuela, a serious defender who had three years in Osasuna and nine in the Real on his back.

Loaded with ínfulas, Espanyol signed up in July for the so-called New York International Tournament, from which he returned with three wins, one draw, three losses and much fatigue. He also enrolled in the Cities in Fair Cup. Created for city selections, in Barcelona it was monopolized by Barça. Then it opened to clubs and Espanyol signed up for this edition. A lot of firewood for a veteran team. He eliminated Hannover, then fell to the Red Star of the great Sekularac. This served to verify that the legendary Ricardo Zamora, at the time the club's technical secretary, maintained enormous popularity in old Europe.

In the League, what had to happen happened. Of the veterans only Gordejuela responded. In Sarriá there were shouts against the board. At the end of the first lap the coach, Saso, fell with the penultimate team. He was replaced by Arcas, old glory of the club, and Ricardo Zamora, in tandem. They improved the results outside, but not so much at home, where the players acted nervously. A draw against Oviedo the penultimate day was the final cause for the team to finish thirteenth, forced to promote permanence.

The opponent was Valladolid, which Espanyol had eliminated in the Cup. He faced the tie with some sense of security. This is going to be a scare that will teach us, nothing more. The way is in Sarriá. There are calls to unity, which work. This time the banners are of encouragement and with courage the team goes out to play. In the 27th minute, there is a foul on the Valladolid area that Gordejuela and Indio bounces, a brilliant but indolent Brazilian, heads 1-0. All right. It only takes another goal, calculates the parish. The big occasion comes in 53, when Gardeazabal (the great referee of the moment and perhaps our history) points penalty for knocking Carranza down. He throws it himself, badly and for Calvo. There the atmosphere changed, in an instant. Pessimism spread. A little later, Carranza falls again in the area, Gardeazábal makes a gesture of whistling ... but does not ring. Then he will explain. "Carranza is a storyteller, I thought she was pretending."

On the way back, in Zorrilla there is an atmosphere of excited expectation. Valladolid does not feel second-class meat, not long ago of its seven internationals and the occasion has come. For Espanyol everything starts weird. He comes with a white shirt and blue pants to distinguish himself from Valladolid. But Birigay demands that they change, and they end up playing with a borrowed red shirt. In '78, Garcia tops the lead 1-0. Espanyol shrinks, doesn't play. He is about to reach the goal of the tiebreaker when, in 88, Knee marks 2-0. Birigay still extends six minutes, so that the parakeets have the opportunity to take advantage of the time they lost themselves. But everything is haste and failures. The team falls for the first time in its history.

It is crying and gnashing of teeth. The entire directive falls, also Arcas and the legendary Zamora. The new president, the first thing he does is sign as coach Heriberto Herrera, whom Valladolid had hired for the promotion. He will comply: Espanyol will rise a year later.