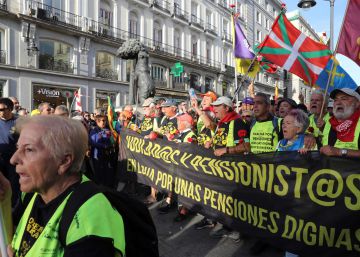 When the President of the Government, Pedro Sánchez, has decided to appoint José Luis Escrivá, Minister of Social Security, Inclusion and Migration, he has made him aware of his proposals to resolve the precarious financial situation of Social Security. The Independent Authority of Fiscal Responsibility (Airef), which this Albacete economist has chaired since 2013, has not long since elaborated a report in which he launches several proposals To correct the situation.

In the short term, the prescriptions of the Escrivá supervising the government’s action were to provide more money for Social Security; in the long term, for reforms that end up being translated into adjustments and cuts for future retirees. This logic does not take off much from what pension reforms have traditionally been, which, except for 2013, have never applied cuts to those who are already pensioners. We still need to know if the new minister arrives to apply this treatment to the letter.

For several years the public pension system ends all the years with a deficit that exceeds 18,000 million euros. That, for Escrivá, is doubly negative. First it is because of the red numbers themselves. But it is also for the public debate that is generated and for the fear that this will spread distrust about the future of pensions. “Closing the Social Security deficit – which brings cause in the economic crisis and idiosyncratic design problems and not in aging – would reduce the uncertainty regarding the sustainability of the system,” read the Airef report.

And for that closure, the proposal is that Social Security receives more resources in a double way:

1) That the State contribute taxes to the money that it now spends in paying employment promotion measures, such as flat rates in the self-employed contribution during its first steps as self-employed workers or operating expenses (personnel, current expenses) , material…).

2) That part of what is collected from unemployment contributions be allocated to pensions. Unemployment insurance is divided into a contributory part (benefits) and other assistance (subsidies and active insertion income). Both are now paid with what workers and employers contribute through fees. The proposal of the Airef is that this assistance part be paid with contributions from the State and what about contributions is sent to the pensions.

In the longer term, the adjustments arrive. The institution that still chairs Escrivá accepts that the annual revaluation index that determined an increase of 0.25% has become socially and politically unfeasible. The now minister already criticized the formula years ago, before this report, in the halls of Congress for the great “circularity it has.” But this does not imply that he liked the revaluation totally linked only to the CPI, it also speaks of GDP or “the income of the state or of the contributions that can combine the maintenance of purchasing power with long-term sustainability.” And for that period he launches other ideas.

2) Increase the number of years with which the pension is calculated to more than 25 years. Spain is raising that requirement for years. In the 2011 reform it was agreed, with the unions and the businessmen, to raise it from 15 years to 25. That increase is being made gradually every year, in 2020 the last 22 years are taken and in 2022 it will be the 25 of the that the Airef speaks. His proposal is to raise it. This measure usually translates into lower pensions for most workers, but not for everyone. Those who lose their jobs in the last years of their working life benefit.

3) The last proposal is a reform of disability pensions to “make better use of the work capacity of individuals”.