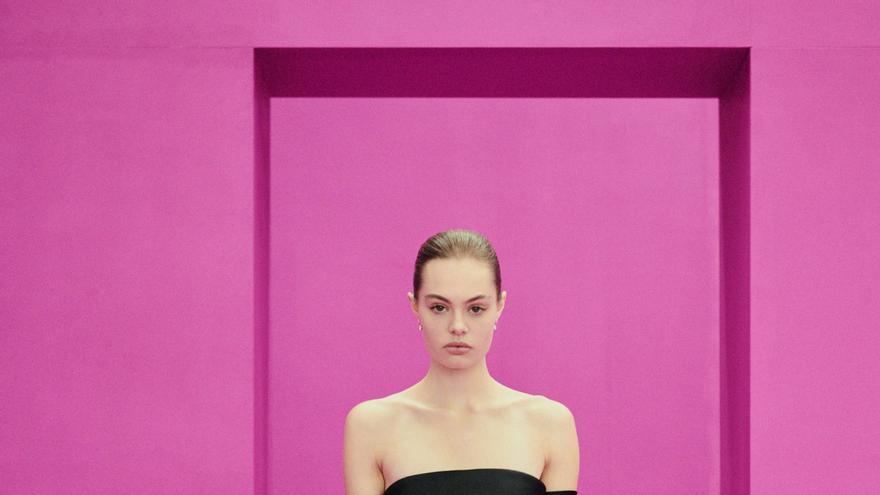 London, 22 Feb (EFE) .- Evasion, whether through cinema, Shakespeare’s poetry or nature, leads the proposals that Emilia Wickstead, Roksanda Ilincic and Riccardo Tisci presented in London this Monday for their first men’s collection at Burberry .

After almost a year of confinement, the cinematographic eye is educated. Emilia Wickstead’s collection for next fall-winter draws on the aristocratic demeanor of Grace Kelly, Silvana Mangano and Tilda Swinton.

The New Zealand designer knows her clientele perfectly: direct contact with them when she only made tailored clothes at the beginning of her career gave her the keys. The inspiration in the costumes and set from films such as “Rear Window” by Alfred Hitchcock, “Teorema” by Pier Paolo Pasolini, or “I am Love” by Luca Guadanigno, responds to this illustrious style.

The heroine dressed in intense colors walks towards what is to come through fuchsia arches that blur the interior with the exterior and recall the Milanese design, the Prada decorations, the interiors of Villa Necchi and those of “Teorema”.

The 1950s flared skirts translate Hitchcock’s instructions to Edith Head for Grace Kelly’s wardrobe: “It must look like a piece of Dresden porcelain, almost untouchable.”

The minimalism of the 90s is peppered with subtle drops of sensuality introduced by short and fitted blouses, deep necklines in the back, strategic cuts and a pair of Rita Hayworth style gloves in “Gilda”.

The collection follows the path that has made the firm Emilia Wickstead one of the designers of the Royal House and the British bourgeoisie. The first two models in this collection bring back lines of the suit Meghan Markle chose to attend mass on Commonwealth Day.

That emerald green suit with cape said goodbye to Buckingham Palace and increased searches for the brand by 286% according to a study by Lyst (a global fashion search engine).

The broken voice of the grandmother recites Sonnet 73 by William Shakespeare, in the calm course of the domestic scenes that show the clothes of the autumn-winter 2021 collection created by Roksanda Ilincic for his eponymous brand.

Shot on an iPhone, Roksanda’s presentation video delves into the moving intimacy of the interaction of three generations of women, protected and liberated by the pieces in this collection.

Grandmother, mother and daughter flow with time dressed in draped silk monocolor tunics that are interspersed in an atmosphere of calm with more sculptural and colorful dresses.

The firm’s link with painting and architecture is as evident in this collection as the place women occupy, thanks to details of the set featuring Serena Williams and the poet Elizabeth Bishop.

The functional, realistic and delicate collection is conceived to be enjoyed at home without losing the handling of the proportions and the color that define the firm. And that they have turned her, along with Wickstead, into a high-ranking fetish designer.

THE ESCAPISM OF THE MAN FROM BURBERRY

Open the presentation with a raincoat. From the waist up it is the classic Burberry beige color but the Riccardo Tisci hit of effect appears when the image is enlarged: the back is cut with the finish of a bomber jacket that reveals a pleated skirt over the trousers.

“For my first Burberry collection for men, I wanted to celebrate freedom of expression. Locked inside, I dreamed of the great outdoors and its beauty,” explains Tisci in the press release.

Their optimistic outing has been reflected in hiking backpacks adorned with umbrellas and blankets, in footwear with soles that simulate hoofs, and in hats with animal ears to protect them from the cold outside.

The youthful and modern interpretation of the Burberry man is reflected in fringes applied to coats, military versions of the trench coat and risky combinations of prints. However, it leaves room for suits with more formal and sober cuts as well as women, represented by models Edie Campbell and Hannah Motler.

“This collection is a tribute to the relationship between humanity and nature, where we can free ourselves and come together to discover new forms of expression,” concludes Tisci.