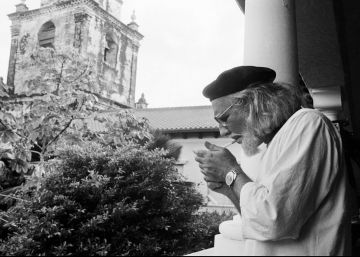 “I don’t know why they congratulate me because I turned 90. It is awful”. So he told me Ernesto Cardenal five years ago. I laughed. That was him. Rajatabla. Resounding He had earned that crafty side that didn’t bend to what others expected of him. He was not interested in the lace of social relations, but he loved his friends, quietly but unequivocally. One could see it in the eyes that could be immensely sweet. And it was enough that one spoke to him about space, science, poetry, so that his mutism disappeared and he spoke enthusiastically about the last thing he had read in the magazine Scientific American or in any of the other scientific journals to which he was subscribed, and which included the New yorker, because like the universe, he was interested in the world. He was mystical, but he had his roots well planted in the earth. He liked food, German sausages, wine, but he lived like a monk in his house in Managua, a room with a bed, a bedside table and a hammock.

Ernesto Cardenal concentrated on him two essential features of Nicaraguan identity: the spirit of struggle for the beloved country and the love for poetry. His youth poems, especially his epigrams, are the same love poems, as sharp sentences against the Somoza dictatorship. The trap in Kentucky in which he was in the fifties and where he made an immense friendship with Thomas Merton, his novice master, taught him that his religious vocation was not contemplative. There he grew his idea of ​​founding in Solentiname, an island of the Great Lake of Nicaragua, a community that, around the simple church he built with the peasants, united the Gospel with art. It was a small but transcendent utopia that, however, did not hesitate to abandon. With his boys he joined the fight against the Somoza dictatorship. When the poets and painters of Solentiname became guerrillas, the Somocista guard destroyed the community.

Ernesto was Minister of Culture of the Revolution. He wanted to disseminate poetry and set up workshops where people in the neighborhoods learned that any simple fact of their lives could be counted in verse. But the exteriorism that characterized his work was not spread. It was his. It was he who used it masterfully, both to tell the heat of the fight, and to talk about the stars. His poem, National Song, dedicated to the Sandinista Front, we reproduced it in a mimeograph and passed it from hand to hand in the seventies. He put into words the pain and hope of that stubborn struggle. That struggle that, when Sandinismo came to power, faced it not only with Pope John Paul II, whose accusing finger pointed out not only the Pontiff set foot in Nicaragua, but with Rosario Murillo.

In the eighties, when writers criticized Murillo and asked for a meeting with the Sandinista leadership, without Daniel Ortega, he came to defend the wife. I will never forget the first thing Cardinal said at that meeting: “We did not want to meet with you, because you are her husband” The integrity and firmness of Cardinal could not with the maneuvers with which Ortega appropriated the FSLN in the nineties. The poet resigned from the game.

Fed up with politics, Cardinal plunged into an inmate life, and in that life, however, he pointed his telescope at the dark night and began to rummage the God of the universe. Fascinated with the mystery of human life in the midst of that inscrutable immensity, he wrote his monumental Cosmic song “We are stardust,” he wrote.

Now he is there, surely well received in the Milky Way. For us, Nicaragua, it is hard to see it disappear. We will miss his black beret, his figure, his voice reading us poetry, his holy indignation against tyranny.