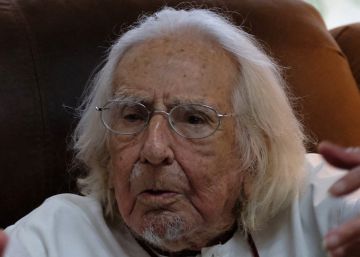 Most birthdays and poetry recitals resemble one thing: only friends go. Unless you turn 95 and you are Ernesto Cardenal. The Nicaraguan poet celebrated them last Monday, January 20, and his Spanish publisher, Trotta, took advantage of the date to present at the Casa de América de Madrid the 1,200 pages from his Complete poetry. The edition is in charge of Professor María Ángeles Pérez López, who, on the occasion of 2012 Reina Sofia Award, already prepared a great anthology whose title could not be more accurate: Hydrogen in love.

On Monday Cardinal sent a video message in which he thanked his editors and his readers. It's not just the three or four that his beloved Ezra Pound was talking about, he said, "there are more, but not many more." He was wrong. On the one hand, the Cervantes hall of the Linares palace was crowded. On the other, three of his best readers participated in the birthday. One of them is himself, who, also on video, recited one of the political-loving epigrams he composed in the 1950s, that is, after enrolling in the revolution of 54 against Anastasio Somoza García and before entering the Trappist monastery of Gethsemane (Kentucky): “I have distributed / clandestine ballots / shouted: VIVA LA LIBERTAD! in the middle of the street / defying the armed guards / I participated in the April rebellion: / but pale when I pass by your house / and your single look makes me tremble ”.

Meanwhile, Sara del Río, a student of dramatic art and future astrophysics, read Prayer for Marilyn Monroe, a classic of modern Latin American literature in which the poet asks God - "you know our dreams better than psychiatrists" - that he receives Norma Jean, that "orphan raped at age 9" that already the 16 years had wanted to commit suicide. One day, finally, he appeared before the Lord without makeup, without a press agent, without photographers, without signing autographs, "just like an astronaut in front of space night." "He was hungry for love and we offered him tranquilizers." They found her dead in bed with the phone in her hand. Who did he want to call? The prayer ends with a claim to the Most High, with the simplest plea in the world: "You answer the phone!"

The third reader of Ernesto Cardenal was on Monday the Child of Elche, who with the mere help of a microphone, a pedal loop and a copy of Psalms, sang, read, whispered, breathed and onomatopoeized the number 21. Before musicalizing the poems of that "unruly rather than revolutionary", what he intended to do, he warned, was "to take out the music inside them." He took it out in such a way that, mixed with the words, it must still be circulating around the House of America in the form of static electricity. Any of the attendees will attest: it is not necessary to believe in God to believe in miracles.