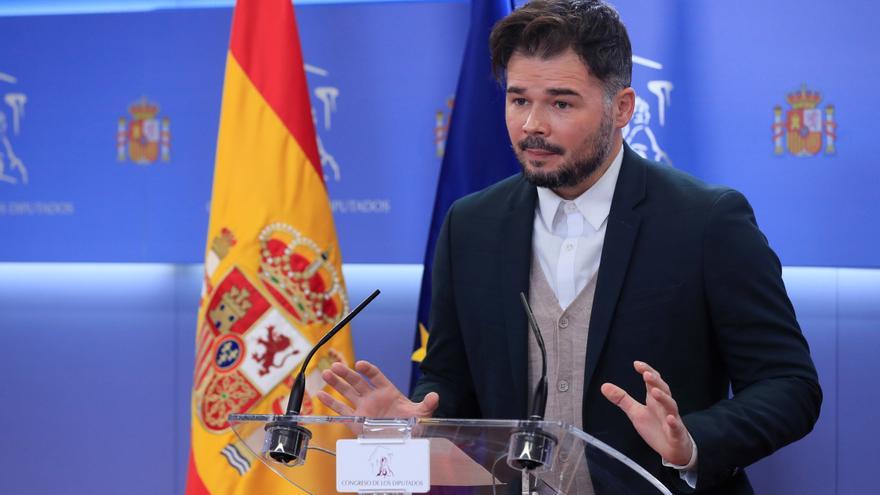 Yes, as the Government has assured this TuesdayInternational audiovisual platforms such as Netflix and HBO are left out of the quotas for the co-official languages ​​agreed with ERC within the framework of the Audiovisual Law approved this Tuesday by the Council of Ministers, the republican formation will not only overturn the approval of that regulation in the Congress of Deputies, but also threatens to torpedo the processing of the General State Budgets in the Senate.

This is how clearly the ERC spokesperson in Congress, Gabriel Rufián, explained it at the last minute at an impromptu press conference. "The PSOE committed to ERC in writing to overcome the first of the Budgets to only negotiate and close this law with ERC. If the information arising from this law is true, ERC would not support, it would not vote for this law. And if ERC would not supports this law, this law does not exist, "said Rufián.

"All the stages are open, also the Senate," he insisted. "Either this law protects audiovisual production in Catalan, Galician and Basque on all platforms or ERC does not support it," he remarked. "For ERC the issue of language is sacred. Either we protect an entire sector or it will go to hell. Touching ERC's nose with this is bad business," he warned.

In a statement, the independence party has also argued that "the Audiovisual Law project approved by the Council of Ministers is incomplete and insufficient and does not respond to what Catalan and the audiovisual sector in Catalonia need." "Esquerra will enforce the possibility offered by the European directive to allocate part of the income of the platforms, whether or not they are based in the state, to production in the language of each of the states, in the same way that France has done. or Italy ", they have explained from ERC.

The Republican formation has insisted that it will not approve an audiovisual law "that does not give a good response to the current situation of marginalization of Catalan in audiovisual platforms, and makes it clear that there is still room for negotiation both in the framework of processing the law as in the one of the General Budgets of the State in the Senate ".

Before the appearance of Rufián from Junts, ERC partner in the Catalan Generalitat, they had put pressure on the Republicans throughout the day so that they would not accept the law if there were no quotas for all platforms. And in the ranks of ERC the message conveyed by Moncloa was received with bewilderment, although they have insisted that the press conference of their spokesperson in Congress was not due to pressure from Junts.

The agreement between the Government and ERC

The accounts were approved last week in Congress with the support of ERC, but the pro-independence party may overthrow them in the Senate, where their votes are once again decisive for them to succeed in the second reading chamber. In the event that the Budgets are not approved there or undergo modifications, they must return to Congress, where ERC could again vote 'no' and ruin the Executive's project.

The Government has warned this Tuesday that the law may impose linguistic quotas on companies based in Spain but not on international platforms, as in the case of Netflix. As the Ministry of Economy has insisted, the European directive that must transpose this norm prevents imposing this type of conditions on companies that are not based in Spain.

But the agreement reached by the Government and ERC, and which allowed their support to the Budgets, consisted of two issues. First, to avoid the amendment to the totality to the accounts, the pact was that the Executive only negotiated on the Audiovisual Law with the republicans. Second, to close the agreement to approve the Budgets, the Government and Esquerra agreed on several modifications to the rule, among which a 6% production quota in Catalan, Galician and Basque was reserved for audiovisual platforms.