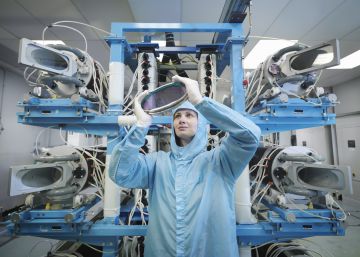 If we were to judge by the numbers, we would have thought for years that women command the Spanish university: of the approximately 1.5 million students, they represent 55.2% of those enrolled, 10 points more than men. But it is a very inhomogeneous presence that is especially evident in the so-called STEM disciplines (Sciences, Technology, Engineering and Mathematics, for its acronym in English), where only 18% of students are women; while representativeness is invested in the more artistic and social disciplines: university students account for 70% of enrollments in Health Sciences, 61.6% for Arts and Humanities and 59.8% for Social Sciences and Legal.

This is a photo that has changed very little over the years, and should seriously question why: although the percentage fluctuates from 12.93% of Computer Science students to 25% of Engineering or 41, 87% of Sciences, is always well below their presence in the university. “It is a complex issue because many factors influence, from cultural stereotypes to messages in the media and within the families themselves, which reach girls since they are little,” says Isabel Tajahuerce, delegate for Equality of the rector of the Complutense University of Madrid and professor of Communication and Gender. “In addition, teachers do not have gender training (neither in schools, nor in institutes, nor in the university), and this is very important when training who then, in turn, should educate others with a gender perspective that explains the reason for inequality in society ”.

The images that persist in the collective imagination of the engineer, usually a man, or the computer scientist as someone friqui With difficulties in relating to others, these are just some of the prejudices and stereotypes ingrained in society. Preconceived ideas that, in the opinion of the experts, have been reinforced since childhood through the media, education and even families: “Normally you give the child construction games, cranes, cars and planes, and girls, dolls . There you are already differentiating and promoting a series of conditions. All of these must also be given to them, to favor their curiosity and their interest in knowing what things are made of and how things work, ”says Tajahuerce.

Stereotypes also come through entertainment: “For many STEM women’s promotion campaigns that you do in the media or in schools, if then the student turns on YouTube or television and finds that the character associated with the science is a boy friqui, socialization expels girls. If you want to reduce the gender differential, you have to work in the media and in fiction; we are sold to the general media context ”, says Rafael Conde, director of the Digital Arts degree at the Camilo José Cela University. This academic has been a teacher for more than a decade in degrees such as Video Game Design, with classrooms almost exclusively occupied by boys, mainly in the fields of design and programming.

The existence of gender inequalities in the access and participation of girls in ICT areas generates a high degree of social injustice, Milagros Sáinz, lead researcher of the Gender and ICT group of the Open University of Catalonia: “It is not social justice to believe that girls do not have enough talent for science and technology when they obtain comparable or even higher marks than their peers. Nor is it systematically making women’s contributions to science and technology invisible in textbooks and instructional materials in all subjects (not just STEM), from childhood to adulthood. Nor is it discriminating against them at the salary level, having as many competencies as their peers, or preventing their advancement and academic and professional promotion. ”

The efforts carried out in many countries to banish these gender stereotypes, promote scientific and technological vocations among girls, and facilitate feminine references for Primary and Secondary girls have been numerous. Public spaces like GirlStem or the Observatory Women, Science and Innovation, created in 2019 to “combat any discrimination based on sex, guarantee equal opportunities and increase the presence of women in all areas of scientific and university life”.

For its part, the project Why so few, presented in June 2019 by the Complutense University, it consists of a feature film and 20 audiovisual pills with which it is intended to make the role of Spanish women in the fields of technology and science visible, with references such as Margarita Salas (biochemist), María Blasco (biologist), Elena García (robotic engineer) or Clara Grima (mathematician). All with the aim of also moving away from stereotypes regarding what these fields of knowledge really are, bringing them closer to citizens and explaining what is being done. “There is an established idea in society that it is something very complicated and difficult to understand. We have to break with that, because if we bring it closer there will be much more interest ”, argues Tajahuerce.

“As a result of stereotypes, there are fewer women in these disciplines, which in turn leads to fewer models and causes stereotypes to be reinforced,” explains Carmen Fenoll, president of the Association of Women Researchers and Technologists (MY T). From the association, they work with administrations to reduce the gender gap, and in each territory they carry out activities to promote these vocations among girls through mentoring programs, talks and other days. “To awaken vocations, you have to go to schools, so that they see that you are not a laboratory rat. Everyone likes to read about science and understand the world around them, and feel that they can be protagonists of these scientific advances. A good popularizer must be able to spread his love for science ”.

The paradox of gender equality

Although it may seem contradictory, countries with a higher equality index have a lower proportion of women studying STEM disciplines than others where it is considered that there is no gender equality. This is stated in a study by the University of Leeds (United Kingdom) and the University of Missouri (United States), published in 2018 in Psychological Science. It is the so-called “gender equality paradox”, which revealed that, in countries such as Albania and Algeria, the percentage of women graduated in STEM was higher than in others such as Finland, Norway or Sweden.

For researchers, this could be because countries with less equality often have lower social assistance and more difficult and less secure living conditions, which makes choosing a career in STEM more attractive, generally better paid. In contrast, nations with greater gender equality are often more developed welfare states that guarantee a high level of social security to their citizens, allowing women to make choices less based on economic factors.

The gender gap is not only visible in the academic choices of university students. In accordance with the recent study of the consulting firm specialized in employer branding Universum, the salary expectations of university students vary considerably, and continue to increase: on average, men expect to receive an annual salary of 24,536 euros, while women put it at 19,247, more than 5,000 euros less; a difference that is also observed in a general way between the students of public universities (21,232 euros) and private ones (24,454).

Gender differences are also evident in the areas where they prefer to develop their professional careers: the ones that interest them most are the aerospace industry, the banking sector and strategic consulting; to them, the advertising, marketing and public relations, arts and entertainment, and fashion, accessories and luxury goods sectors.

But the gender gap is not limited only to university students, as experts point out. “Of all the professors at Spanish universities, only 20% are women; and the same occurs in the higher scale of research centers, despite the fact that for years there have been more female graduates than men ”, Fenoll recalls.

The difference is in turn noticeable between the research staff of public universities and public research organizations (OPIs), and denotes the same gender bias already observed among students from different areas of knowledge, as observed in the report. Scientific figures in 2017, of the Ministry of Science, Innovation and Universities. Thus, the areas where a greater female presence is detected are those of the humanities (47% in 2016), social sciences (46%) and medical and health sciences (44%), while the percentage decreases as they acquire a character more scientific or technological: 42% in agricultural sciences, 34% in natural sciences and only 28% in Engineering and Technology. On average, female research staff remained stable between 2013 and 2016, at 39%.

The reconciliation of personal, work and family life, and the elimination of gender barriers in access and promotion of a research career is, according to said report, a priority for most public and private universities (72%) and OPIs ( 83%), although the same does not happen when it comes to promoting STEM vocations in girls and young people through specific actions such as mentoring programs (in 80% of public universities, but only 44% of private and 63% of IPOs).