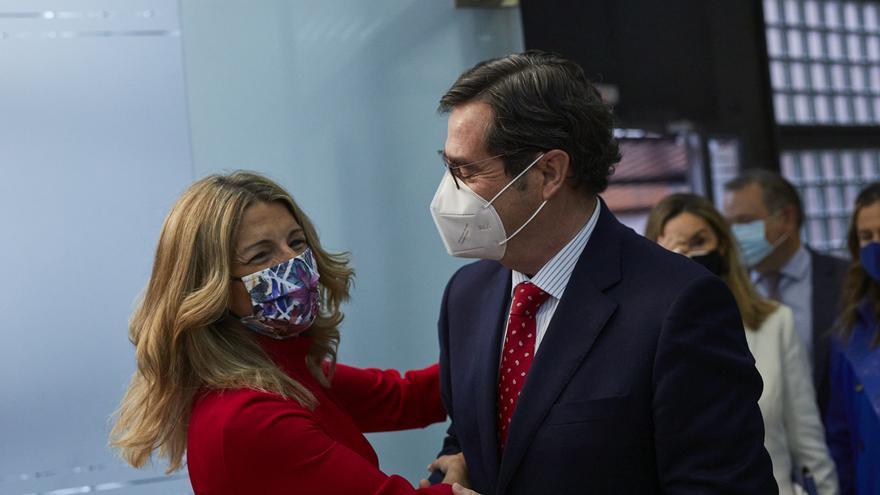 “Sometimes, not negotiating is lost.” Yolanda Díaz left this message to entrepreneurs in the day after the agreement between the Government and the unions to raise the SMI 15 euros for the final stretch of the year, up to 965 euros. The Executive was open to lower hikes in order to add businessmen to the agreement. A rise with the endorsement of the employer gives more security about its application by launching a message to companies in the country, which see that their “leaders” support the measure. But there was no way. The result leaves another message to the employers for future negotiations: standing up has not blocked the measure and, in addition, it has gone ahead with those who do want to negotiate, the unions.

What happened to the SMI had not happened so far. The coalition government has carried out the vast majority of labor measures with the consensus of the social agents, after negotiating them in social dialogue. On a previous occasion, regarding regulations for equality plans and equal pay, the businessmen dropped the hook at the last moment of the pact. But at least they negotiated its content, with contributions and changes in the texts that emerged from their intervention. On this occasion, the attitude of the businessmen has been different: they have not negotiated.

The CEOE and Cepyme clung to the ‘no’ to any increase in the minimum wage this year, no matter how small, explain sources of social dialogue. Entrepreneurs have not entered to discuss in depth options according to a lower increase because they have clung to “this is not the time.” The rise in the SMI in 2021 thus became a red line and they insisted that they would only address this debate at the end of the year, looking ahead to 2022.

His sit-in confronted the coalition government with an unprecedented situation. The social dialogue agreements have meant an important support to the Executive at a key moment, of unprecedented crisis in the face of the coronavirus pandemic, giving legitimacy to their actions, which were not only theirs, but the result of mutual assignments and consensus with social agents. It is not trivial considering the political context, in which some parties even label the government as “illegitimate” and have not reduced the harshness of their opposition during the past year.

Despite CEOE’s immobility, the negotiation dragged on in the hope of attracting businessmen. When it became clear that it was not possible, the Ministry of Labor made the decision to move forward with the measure by agreeing only with the unions, which allowed a higher SMI rise for workers.

The two-party agreement, however, had to overcome internal resistance from the socialist part of the Executive, as Yolanda Díaz pointed out. These have always been led by the economic vice president, Nadia Calviño, who has referred on several occasions in recent weeks to the negotiation of the SMI, but in a different sense to that which was defending Work on the table.

For example, Calviño pointed out that the salary increase would be applied from October, when with the social agents it had always been proposed that it be from September 1. Finally, that has been the agreement. And this Thursday, when the pact between Labor and the trade union centrals was already being caressed, Calviño still insisted that there was a “formal consultation” on the subject and that the decision would be taken “in the next few days.”

The debate was finally resolved within the Government, between Moncloa and Labor, in favor of the pact with the unions. They, for their part, had yielded to not reflect the requirement of an SMI of 1,000 euros in 2022, but at least the agreement contemplates a reference that next year it will continue to approach the goal of 60% of the average salary, which will be reached ” before the end of the legislature. ”

The unions have celebrated that the employer’s “right of veto” is not allowed. That is to say, that the agreement in the social dialogue is positioned as the objective to carry out a measure, because in this scenario if a party does not want to negotiate (as is usually the case with employers), there is no measure. In the past, it has been criticized that the mentions by President Sánchez and Vice President Calviño of the need for a social agreement to dismantle the labor reform gave this letter of veto to employers.

The CCOO leader, Unai Sordo, highlighted precisely the importance of reaching a bilateral agreement on the minimum wage so that it would also function as a “precedent”. “Nobody can veto the tables of social dialogue,” he said. For months, Minister Yolanda Díaz has insisted that social dialogue is a path, not an end. It is negotiated so that there is an agreement, but if there is not, the Government has in its hand to legislate. As has happened with the minimum wage.

There are important pending reforms that have the resistance of businessmen, but it remains to be seen to what extent. If the employers agree to negotiate until the end and even if they are willing to reach agreements on matters as complex as pensions and labor reform. It is unlikely, the unions emphasize, but to date employers have opted for practicality: better an agreement that is not entirely content, to a degree in which they have no influence and that ‘hurts’ their pockets more. Its position will be defined in the coming months.

Tags: businessmen, government, it happens, no, they negotiate