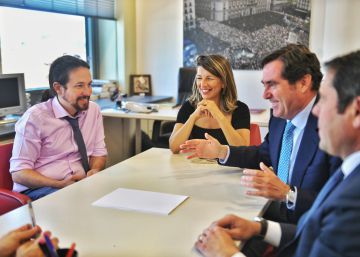 The employers came claiming a "government of moderation" – without Pablo Iglesias – but the businessmen already assume the alliance between PSOE and United We can to form a "progressive government". That does not mean that they will stop claiming that red lines are respected which, according to the sources consulted, should not be transferred. Within these limits, the main business associations demand that the constitutional framework not be exceeded, in reference to the conversations with ERC, and that a large tax increase or the reversal of reforms that "have been positive for creating employment" be avoided. If that happens, they warn that they will be belligerent.

Since Pedro Sánchez and Pablo Iglesias gave each other the post-election hug, both the main business organizations and other entrepreneurs on a private basis have not stopped sending direct and indirect messages so that the alliance between PSOE and Podemos does not prosper. At the same time, they have given preference to the PP to promote a legislature agreement so that there is a "stable and moderate" government, as claimed by the board of directors of the CEOE and asked yesterday the Circle of Businessmen. Without mentioning directly to Podemos or making any express request to the PP, the CEOE said in a statement: "We transfer to the parties the need for negotiations for the formation of a new Government to be addressed with a sense of state and putting respect and respect compliance with the constitutional framework for private interests. "

After three weeks of that embrace pact, his concern has been increasing before the possibility that independence, through ERC, enter the alliance game. "The ones (by PSOE and Podemos) are in legitimate positions, but wrong, and with respect to the others (ERC), what we want is to apply the law and the Constitution," says CEOE CEO Antonio Garamendi , who insists that his message remains the same from day one. That is, the Government guarantees stability and moderation within the constitutional order. However, qualifies that the employer can not go further in their assessment until "do not know how far they want to go" the Socialists and Esquerra.

These declarations of Garamendi arrive after knowing the visit of the union leaders (Unai Sordo, of CC OO, and Pepe Álvarez, of UGT) to Oriol Junqueras in jail. The CEOE does not vary one iota its speech by those interviews. "What I am clear about is that I am not going to visit Junqueras," he said yesterday after attending a breakfast organized by the employer, in open reference to the visit made at the time by his predecessor, Juan Rosell, to the leader of Republican Esquerra.

The business leader has had the opportunity, in any case, to contact the acting Government. "I've been with everyone I had to be," says Garamendi without revealing if a visit to La Moncloa is included in the meetings. In any case, the CEOE has received messages from Pedro Sánchez to reduce the concern: through Minister Nadia Calviño, who has met again and again with the employers and advances a continuous economic policy, and even in the coalition agreement PSOE-Podemos, whose point 9 underlines the commitment of the future Executive to the fiscal goals agreed with Brussels. La Moncloa conveys the message that "businessmen will be convinced that there will be no traumatic decision as there was in 1982 – after the victory of the PSOE, when talking about the nationalization of banking and power companies – nor is it going to transgress the Constitution. "

Just in case, Garamendi, who also met with Podemos in summer, insists that businessmen will be belligerent if they detect measures "that are bad for the country." The possibility of completely reversing the labor reform, of approving a general tax increase or of exceeding the constitutional framework to attract ERC would fall into that category. "We think that it is possible to dialogue within the law and that there are great agreements that need the consensus of the big parties," the sources consulted complete.

Garamendi appeals to the responsibility of the parties. In his opinion, "in a scenario of deceleration, it is essential, within the diversity of forces, to have a stable and moderate government, which fosters state pacts on unplayable reforms to ensure sustainable economic growth generating more and better jobs" . In silver: that the PSOE moves away from Podemos and any agreement with ERC and that the PP and Cs move.

In similar terms it has been expressed Josep Sánchez Llibre, president of the Catalan employers Foment del Treball and vice president of the CEOE, who at the time celebrated that "the two parties" would have agreed, but immediately stressed that Catalan businessmen also want a "stable, moderate and rigorous" Government within the constitutionalist lines and not far from the fiscal orthodoxy demanded by Brussels. The former deputy of the former CiU (Unió branch) said yesterday: "I do not want to demonize a legitimate alliance of some groups with whom I have to understand later and of which the program is not yet known. The band must not be put on before the wound. Then we'll talk. "

"The electoral result is what it is; we must also live with the independentists," he continues with pragmatism, "and we must take advantage of all the mechanisms that exist to achieve a government that moves through constitutional channels and respects the principles of moderation, stability and rigor. And if there are independentist parties that support a constitutionalist government, welcome. " The opposite, in his opinion, will be casus belli for entrepreneurs. The head of Foment, who stressed that "with Podemos or without Podemos" the budgets "will be very controlled by Europe and there will be little room for maneuver," also calls for dialogue between the Government and the Generalitat.

Another very active actor in this scenario is the president of the Chamber of Commerce of Spain, Josep Lluís Bonet, who insists on the same line: Spain needs a "focused and stable" Government. In the S'Agaró (Girona) conference, Bonet added that Spain needs a government that "addresses the challenges facing Spanish society." "Some deep surgeries are needed," he said in relation to the essential structural reforms on issues such as education or energy.

In that context, the most belligerent is the Circle of Businessmen, in which a hundred executives of large companies are grouped. This group published yesterday a letter in which it calls on the president of the Government in office, as well as the leaders of the PP and Cs, to "start talks and reach a pact between parties that defend the Constitution and the consensus of the 78 to get Spain out of the blockade. "

"We can keep repeating elections over and over again, deteriorating the confidence of citizens more or more, or we can put the interests of the country ahead of the partisans," says the letter of the Circle, led by John de Zulueta. Even more conclusive is an entrepreneurial source that asks for anonymity: "Everything would have been fixed if the same electoral night had Pablo Casado called Sanchez to offer him a legislature pact with the commitment to make a loyal and forceful opposition."