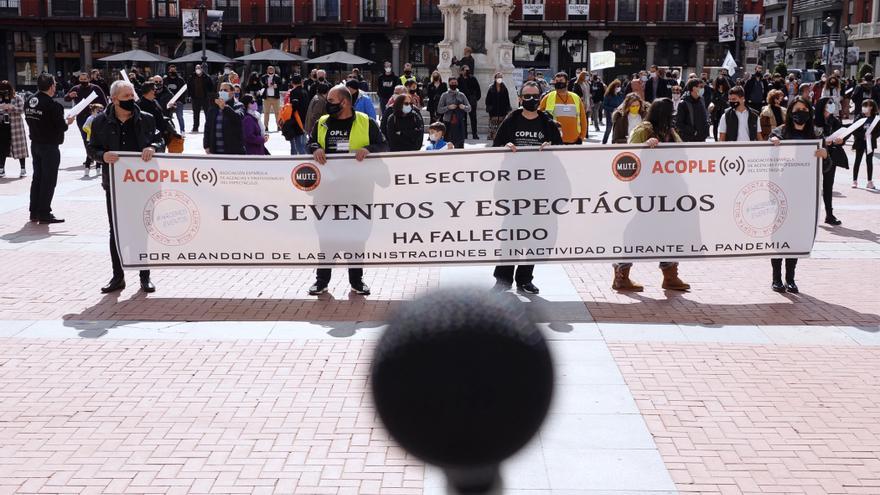 Madrid, Mar 14 (EFE) .- Members of the entertainment, performing arts, events and culture sectors have gathered this Sunday in several cities to ask for “concrete measures that ensure the worthy development of their activity” and remind administrations of the situation “of total abandonment” in which they find themselves.

After several months of inactivity and just one year after the state of alarm was decreed for the Covid-19 health crisis, these workers have confessed that “we can no longer do it” and have again denounced “the insufficient aid to companies, freelancers and workers of different cultural groups ”

Convened by the United Mobilization of Entertainment Workers (MUTE) in collaboration with other associations, these demonstrations have been transferred to the streets of Valladolid, Madrid, Valencia, Seville, Córdoba and Zaragoza.

Under the motto “a year of condemnation”, artists, musicians, decorators, sound technicians, illuminators, tailors or stagehands who are part of the 24,000 workers of the 5,200 companies in Castilla y León dedicated to the world of culture, entertainment and the events have taken to the streets this Sunday in Valladolid.

The MUTE spokesperson in the Community, Manolo Perdido, has described the specific aid for the sector as “alms”, which asks to be recognized as particularly affected, since if the hospitality industry has been affected by 50 percent they have been by 90 percent.

After a year of “total inactivity”, in which they have not made any cash, Perdido has insisted on that physical “hunger” that they are experiencing, but also that other “hunger” for culture that people have, to have fun, to go to a festival or listen to an orchestra.

“While the rest of the sectors are reactivated, the culture is dying out. It is dying slowly, dying under the yoke of inaction and the lack of initiatives. You are burying a sector that is synonymous with freedom, growth and democracy. And our people are tired of waiting and having patience, because behind the companies and workers there are people and families who can no longer wait, “says the manifesto read at the end of the event.

An act that has had the presence of “hundreds of professionals” and that has also had “great repercussion” both in Seville and Córdoba, where “about 500 people” have concentrated in each of them, as recognized by Efe Jose Antonio Duque, member of the MUTE state coordination team.

“In Madrid there have been, perhaps, fewer people; but in Zaragoza and Valencia the response has also been very good, because there they have taken to the streets with vehicles,” he added.

In Valencia, a caravan of about 120 vehicles has circulated through the center of the city and the protest has concluded with the reading of a manifesto in which they recalled that they have been “a year without working and we are going hungry, and not just physical hunger , that also”.

“We are a country hungry for culture, we need it, we create it, we breathe it and we live it. And above all it is a fundamental right that is being taken from us,” they affirm.

“We have been without income for a long time and we can’t do it anymore. To top it all off, in the last game of aid approved they have left out the world of verbena and orchestras. Who do they want to help if they forget those we need most? everything they do, “concludes Duque.

Tags: come out, do not, show, streets, workers