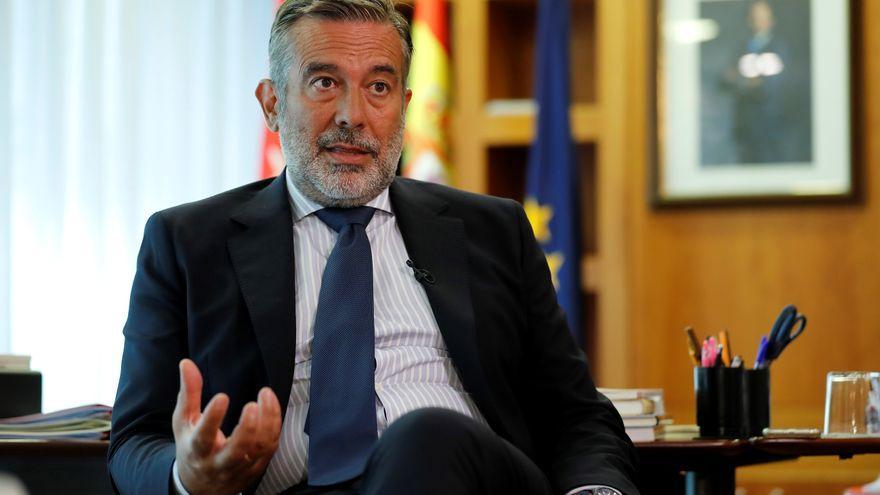 The counselor of Justice of the Community of Madrid, Enrique López, admits that he acted as an intermediary by “putting in contact” the businessman Agustin D., friend of the former Treasurer of the Popular Party Luis Bárcenas, and the lawyer of the PP Jesús Santos in 2017. López He was then a judge of the National High Court.

“As the information from El Mundo points out, Enrique López limited himself to contacting the businessman Agustin D. and the lawyer Jesús Santos in 2017. From then on, López did not carry out any action or have any dialogue on the case Bárcenas “, sources close to López assure elDiario.es.

As published The world, the lawyer of the Popular Party, Jesús Santos, met a dozen times between 2017 and 2019 with a close friend who was liaising with the former treasurer of the formation Luis Bárcenas, businessman Agustín D. These meetings could take place thanks to the intermediation of Enrique López, as he admits.

The environment of Madrid’s counselor disassociates this intermediation with his current position in the PP as Secretary of Justice of the PP since January 2020. “In no case did he act in this matter as a member of the party,” these same sources point out. López is currently a man of full confidence in Pablo Casado to whom, among other issues, he has delegated the negotiations for the renewal of the General Council of the Judiciary.

According to this newspaper, the businessman friend of Bárcenas communicated to the PP lawyer the desire of the former PP treasurer to meet him in person. The meeting was not authorized by the leadership of the PP of Rajoy and the meeting never took place.

Reactions to this information have not been long in coming. The second vice president of the Government, Pablo Iglesias, has criticized this Tuesday that mediation that López made between the PP and his former treasurer Luis Bárcenas, the current Minister of Justice of the Government of Madrid and at that time a judge of the National Court.

In a tweet, the also secretary general of Podemos has reviewed some of the central points of the career of which he has described as a “judge / politician”: “Set aside in 2015 from the Bárcenas case due to proximity to the PP. He sentenced Valtonyc to 3.5 years. Director of IDA. ‘Negotiator’ of Casado for the renewal of the CGPJ. While he was a judge, he mediated between Bárcenas and the PP “.

Iglesias also recalls that López had to resign as a magistrate of the Constitutional Court when was caught driving a motorcycle at dawn, without a helmet and under the influence of alcohol.

The vice president ditches his tweet with a reference to the latest controversy generated after his criticism of the stay in prison of the leaders of the procés or of rapper Pablo Hasel. In an interview this weekend in the newspaper ‘Ara’, Iglesias said that “there is no situation of full political and democratic normality” because a “political conflict” has been “managed through police and judicial channels.”

Iglesias has now insisted, after confirming the mediation of Enrique López while he was a judge, on questioning the “democratic normality” of Spain. This position of the second vice president clashes with the position of the PSOE, which maintains that Spain is “a full democracy.”

The number two of the PSOE in Congress, Rafael Simancas, has not hesitated to point directly to Casado in an alleged negotiation with Bárcenas. “The vast majority of Spanish citizens have the right to know the content of the negotiations of the PP of Casado with Luis Bárcenas. What did the intermediaries of Pablo Casado and the current leadership of the PP ask of Bárcenas? What silences did they demand of Luis Bárcenas? Who were the envoys of Pablo Casado and the PP leadership protecting? And what did they offer Bárcenas in exchange for those silences? And what role did Enrique López play in all this that is not the PP of the past? ” Simancas wondered.

The accusations of the ex-treasurer of the PP and the intermediation of the person in charge of Justice to put him in contact with the party’s lawyer lead the PSOE to propose that Bárcenas be one of the first to appear in the investigation commission on the Kitchen operation that will begin its work in the next weeks. The idea is that first the police commanders parade and then the political positions, among them Mariano Rajoy or María Dolores de Cospedal. “Spaniards have the right to know what the current leadership of the PP has been negotiating with the criminal Bárcenas,” concluded Simancas, who has left open the possibility of citing Casado, whom the Socialists have so far refused to call to appear upon understanding that he did not have a position of responsibility in Genoa when the events occurred. “The list of appearing parties has already been agreed. However, the commission reserved the possibility of calling new appearing parties depending on the development of the debates. And I will leave it there,” concluded Simancas.