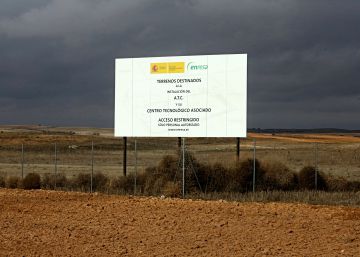 Enresa, the public company in charge of nuclear waste, has decided to put an end to the contest that opened in 2014 to build the so-called Centralized Temporary Warehouse (ATC) in Villar de Cañas (Cuenca). This company launched that contest for the execution of the main civil works of that silo – which was designed to store high-intensity waste from all nuclear power plants in Spain. But the award of the work, which amounted to more than 217 million, it was never carried out, due to doubts about the lands chosen to lift the warehouse and then to the change of central government.

The process has remained paralyzed since February 2015. Now the current address of Enresa has decided to bury it definitively and give up a contest in which the envelopes with the offers were not even opened, according to sources in the sector.

This decision is interpreted as a new step towards the end of the ATC in Villar de Cañas, a project in which Enresa has spent about 90 million euros but that the Executive of Pedro Sánchez decided to stop when he came to power in 2018 before the controversies Y the strong opposition of the Government of Castilla-La Mancha. Even if it were decided to continue with the silo in that municipality of Cuenca, a new contest would be needed because the reports that the Nuclear Safety Council (CSN) has issued in the last five years impose important modifications, point out knowledgeable sources of the whole process.

In any case, the final decision on the project and the ATC does not depend on Enresa, who on Monday refused to provide information on the closing of the contest. The Ministry for Ecological Transition is the one who must decide if one or more ATCs are built and their location. In a recent interview with EL PAÍS, Vice President Teresa Ribera He criticized the management of the Villar de Cañas project and said he does not see “easy to be recoverable under any circumstances.” He also pointed out that “debate” on nuclear waste should be “opened and decide if” one, two or three sites must be installed and if there are regions. “

Apart from the fact that the Villar de Cañas site is definitely rejected, the Government is aware that Spain must solve the problem of nuclear waste, which is now mainly stored by each plant in its facilities. Enresa is expected to present its proposal for a nuclear waste plan to the Government shortly and at that time the debate on the solution given will be opened.

The contest that Enresa has now closed was surrounded by controversy from the beginning and the stubbornness to push it forward It cost him in 2015 the position as president of that public company to Francisco Gil-Ortega. In spite of the technical doubts that there were already about the soils and that the Nuclear Safety Council had not concluded its report on the suitability of the site, the Gil-Ortega team insisted on moving forward with the award. Finally, the PP Government decided to paralyze the adjudication process now closed and Gil-Ortega resigned.