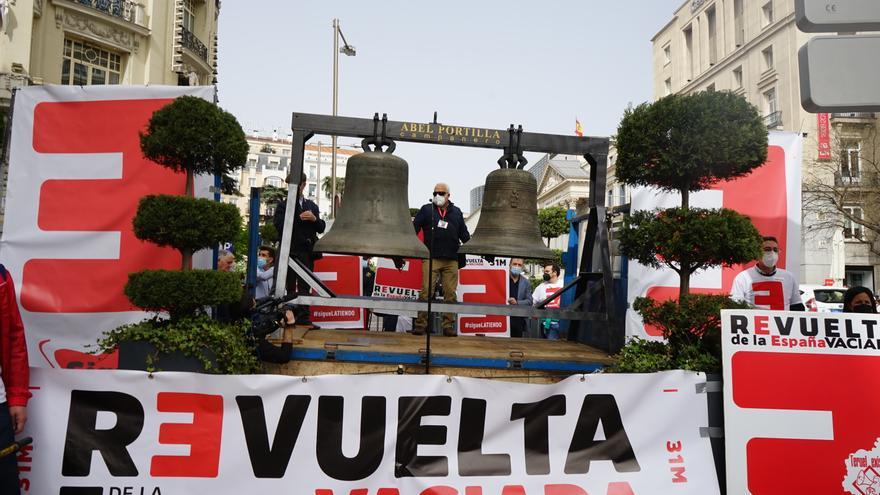 The worst defeat for the Spain Emptied it is produced when another town is added to the list that is left without inhabitants and disappears. Before this happens, the slow agony: the closure of another health center, the lack of shops, schools, transport or banking services. Avoiding that destination, that of another depopulated municipality, is the objective with which the III General Assembly of Emptied Spain that is held in Priego (Cuenca, 896 inhabitants) has started this weekend and which starts with a clear idea, the that the last train passes by the 10,000 million euros of European funds to fight rural depopulation. The future of hundreds of towns depends on what that amount is invested in.

“There are many municipalities that cannot continue holding out like this. Within three or four years many will disappear,” predicts Antonio Saz, spokesman for the Teruel Existe citizen movement. 160 associations from more than 20 provinces will attend the event. “We have to demand concrete measures with funding now, not start thinking about measures and analysis.” Saz claims to move from theory to action as soon as possible.

“The great defeat is losing services and it is the dynamic we are seeing,” he continues. “We are being excluded from banking services, transportation, security. If we want this to be reversed it has to be with actions and measures. We are people with the same rights regardless of where we are located,” he adds.

But the coordinator of the Empty Spain demands that the measures applied take into account their ‘Development model’, a document consisting of 101 measures that was presented in the Congress of Deputies last May. The text offers concrete measures of action to invest the 10,000 million euros, or at least part of it, in his version of the fight against depopulation.

A return plan for young people; that getting to a health or educational center does not take more than half an hour; carry out a just energy transition so that the installation of renewables truly generates wealth and employment in small municipalities or that the territories that generate these clean energies are directly compensated are some of the ideas that are extracted from the 340-page document.

“We came to Priego with three very significant objectives,” continues Saz. “To convince the entire political arc of the problem of territorial cohesion and depopulation; to get all politicians to commit themselves and to put something that is vital in motion, the 100/30/30 plan,” he lists from the other side of the telephone.

The 100/30/30 plan requires that any territory have a minimum capacity of 100 symmetric MB of Internet access, in order to ensure that people who can work remotely settle in the territory. The measure also requires that it take no more than 30 minutes to reach a health or educational center, or that to reach a high-capacity road the distance to travel is not more than 30 kilometers.

The platforms are also demanding a tax reduction for companies that already work in the territory or for those that want to set up. They argue that if the State does not provide the same services, the same taxes are not paid either.

“The most relevant part is how to achieve it, because we have not achieved it since 2019 [fecha que hace referencia a la gran manifestación de la Revuelta de la España Vaciada], move from theory to practice “, acknowledges Fernando Pulido, spokesman for Extremadura Vaciada. Pulido believes that, although there is an announced expenditure of 10,000 million,” they do not see clear the horizon or the degree of involvement of the Government in solving the problem “.

Pulido qualifies the 130 measures in the face of the demographic challenge proposed by the Government as “hasty” and considers that “the philosophy on which they are based is totally different” from those proposed by the coordinator. “The problem of Emptied Spain has to be solved with its inhabitants,” he protests, and gives as an example “the implementation of large wind power plants” that are causing protests in Galicia or Teruel. “Renewable energies yes, but not like that,” he points out, referring to one of his used slogans.

“The government’s plan is designed from the big city. If this opportunity is passed, the towns will disappear. We will have no choice but to go live in Madrid and Barcelona,” concludes Pulido.

“There is a stratospheric distance between a ministerial office and the people who live in the territories,” acknowledge sources from Teruel Existe, after two years of experience working in the Congress of Deputies under the guidance of Tomás Guitarte. A little over a year ago, they managed to get Congress to approve with a large majority of support a motion urging the Government to act by launching a “Pact for the Reactivation of Depopulated Areas.” Then came the plan of the Ministry and European funds. “Even if you put millions on the table, a public initiative is needed to put big motor projects in motion,” they explain. “The problem is that they consider that small is a town of 10,000 inhabitants or 2,000. Most of our towns have less than 500 and there are many of 200 and 100 inhabitants.”

From Cuenca Now, they point out that this third assembly also wants to analyze what has been achieved: to talk about depopulation as an important issue. They also highlight the strength that this great coordinator now has, which does not stop growing and will leave Priego strengthened. “Depopulation has been made the order of the day,” says Cruz Fernández, spokesman for the Cuenca association.

“There has not been considerable progress that we hope will materialize with the arrival of 10 billion euros and with the state pact,” Fernández wishes. Reactivate the conventional train, that there is Internet in the towns, that those who settle do not leave, be able to go to the cinema or the theater, that hospitals open and health centers do not close. “We hope so. It is our hope. The elaboration of the development model that has been the result of the work. We hope that the Government, apart from its own that it presented [la vicepresidenta Teresa] Ribera, add the most important of ours, “he concludes.