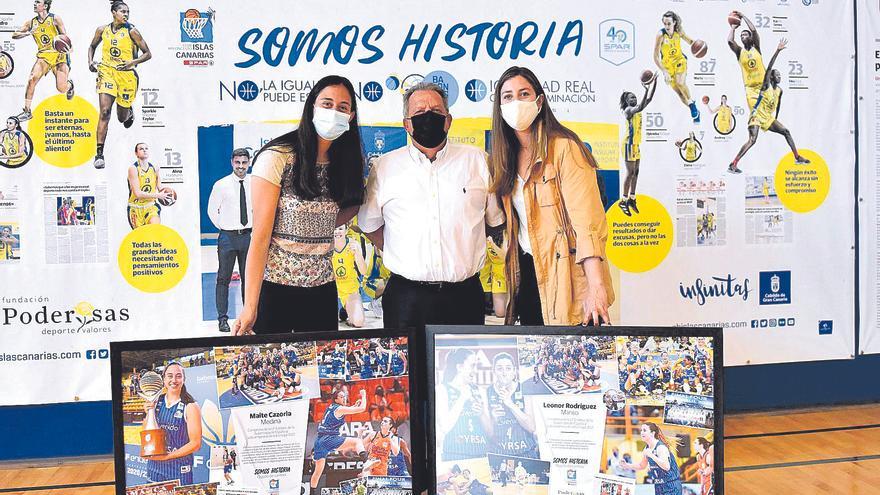 «They started here, just like all of you and based on sacrifice and a lot, a lot of work, they have achieved all the achievements they have made during their careers. So here they are, in the house where they started to grow up. With these words, Domingo Díaz addressed the more than one hundred players from the quarry of the CB Islas Canarias who crowded around Maite Cazorla and Leonor Rodríguez to enjoy a few minutes with two of the national basketball referents and who, in addition, carry the name of Gran Canaria around the planet.

If the track record of both players already has numerous lines, this season has served to further add to that list that seems endless. From the training-age titles cooked over low heat in La Paterna, to the two wound of this season under the shirt of the Perfumerías Avenida Salamanca.

The Spanish Super Cup and the Iberdrola League already pose in the showcases of Magic Leo and Maite, after an “outstanding” season, as both players confirm, despite having to live with the little silver medal thorn in the Euroleague at lose in the final against the almighty UMMC Yekaterinburg.

“We played ten games in the Euroleague and lost only one. You cannot be dissatisfied, at least I speak personally, because we gave everything we had and on top of that we gave him a sit-in that you don’t see a great team like Yekaterinburg, who had no easy time to beat us “, Leonor reviews about that match against the Russian team, in which despite having lost the final, they were smiling along with all their colleagues from the Perfumerías at the awards ceremony, aware of the level delivered on the court against the favorites.

Reflection that Maite also transmits about that silver medal. “Obviously we all wanted to win the Euroleague, but we have to be aware that reaching the final has a huge job behind us and we have to be proud of them as well,” the base underlines.

A second place that they improved at least in the Iberdrola Women’s League, by beating Valencia Basket from another Gran Canaria like Leticia Romero in the final of the Playoff (2-1), and which maintains the insular level of the basket through the roof.

Fundamental pieces in the rotation of Roberto Íñiguez, Perfumerías coach, will now also be for his counterpart on the national team bench, Lucas Mondelo.

The coach’s slate will again have another summer more plays prepared for the two Gran Canaria on their way to the conquest, first of the Eurobasket, and later, in the Tokyo Olympic Games, in case they continue in the national call.

This same weekend the concentration of the Spanish team starts in Valencia, where the continental championship will be played from June 17 to 27. But first he will be getting ready to defend the last two European crowns won by the national team.

At L’Alquería, the two stars of the Island will «continue working as we have done this year, which I think is what has led us to the national team and then the coach will decide whether to keep us in the team. call or not ”, reflects Leonor, more veteran than Maite in experiences with the red elastic. While Rodríguez has 78 caps, Cazorla goes for his second game at the helm of the Spanish ship.

To do this, they will first complete a preparation of six matches before starting the Eurobasket, all broadcast by Teledeporte. In Toulouse, he will play a double clash with France on Sunday 23, at 4:45 p.m., and on Monday, May 24, at 3:05 p.m. And later he will travel to Córdoba to play a triangle in which Nigeria (Thursday, June 3, 8:00 p.m.) and Belgium (Saturday, June 5, at 5:45 p.m.) will be the rivals.

Finally, back in Valencia, they will face another triangular game against Turkey (Thursday 10, at 7:30 p.m.) and Italy (Saturday 12, 7:30 p.m.), before entering the Eurobasket.

In the continental tournament they will face Belarus (Thursday 17, 8:00 pm), “a team that has very good shooters and very versatile centers”; against Sweden (Friday 18) «who always tend to be very similar players among all»; and they will close the first phase against Slovakia (Sunday 20), “the team of all the championships against which you can not relax because you can mess it up”, according to the analysis of Leonor Rodríguez.

A journey to once again raise the third consecutive title in Europe with some protagonists who bear the name of Gran Canaria beyond the borders of the Archipelago and who have a legacy in La Paterna, on which to look at the future promises of SPAR Gran Canaria and emulate them in their next matches.