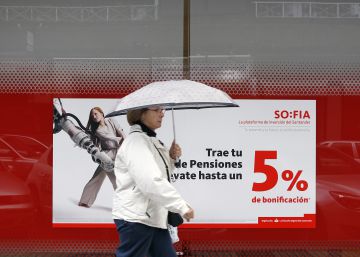 The occupational pension plans they do not lift their heads. This type of supplementary savings vehicle for retirement, which is created at the initiative of the employer (either a company or a public administration), has 1,966 million participants. But in the last ten years this number has dropped by 183,000 people.

The Government wants to promote this type of pension plans, to the detriment of individual plans. He considers that this investment format, linked to the employment relationship, is the most optimal for accumulating assets that complete the public pension. For this reason, the tax regime for contributions to individual pension plans will worsen (by reducing the annual tax-deductible ceiling from 8,000 euros per year to only 2,000 euros), and the regime for employment plans will slightly improve.

This legal figure has been languishing for years. Currently there are 34,765 million euros saved under this formula, according to calculations made by the association of pension fund managers and funds (Inverco). The figure is 1.4% lower than what it was at the end of 2014.

This fall would be much greater if it were not for the revaluation that the assets (bonds and stocks) in which these employment plans invest in this period. The average annual return on employment plans in the last five years has been 2.2%.

However, if only the money that enters and leaves these types of vehicles is taken into account, the balance is devastating. Since the end of 2011, each year more money comes out than enters the system. In these eight years and nine months, almost 3,600 million euros have come out. In other words, the new contributions that are made do not compensate the tens of thousands of owners of employment plans who retire and begin to collect their benefits.

The Ministry of Integration, Social Security and Equality, led by José Luis Escrivá, is very clear that the best way to promote complementary savings for retirement is to promote employment plans, as other countries have done. The big problem today is that this type of vehicle is promoted in the framework of collective bargaining, between employers and unions. This leaves the self-employed and the millions of workers in small and medium-sized companies out of the picture.

To solve this, Escrivá wants to promote an employment plan, open in nature, to which all types of workers could apply. The ministry’s plan is to put out to tender a mandate to manage this vehicle, which would have very low commissions.

One of the fundamental explanations for this negative balance is what has happened to the employment plans of the public Administrations (General State Administration, Generalitat of Catalonia, officials of city councils, companies and public organizations …). With the sovereign debt crisis of 2012, the Government prohibited the public sector from making contributions to this type of vehicle. Therefore, the assets were frozen for the entries, but not for the exits, which keep pace with the retirements of public servants.

One of the factors by which the Executive wants to encourage employment plans is by commissions. In these vehicles, the expenses applied by the managers are usually between 0.2% and 0.4% per annum of the fund’s assets. Meanwhile, in individual plans the average commission is 1.4% per year.

“The problem is that banks often use these good commissions in employment plans as a bargaining chip to offer other types of products, especially loans, for large companies or Administrations that promote the plan,” explains a veteran plan advisor. job.