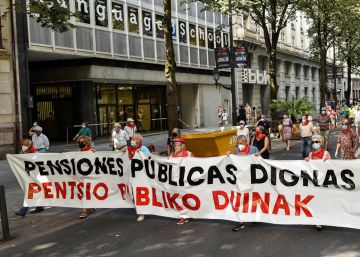 The Toledo Pact Commission has resumed its work with the intention of accelerating a parliamentary agreement on recommendations for the reform of the pension system. This agreement will be the one from which the Government, the employers’ association and the unions start to make this reform law, if possible also with consensus.

Just yesterday it was the pension managers of the CC OO and UGT unions and the CEOE-Cepyme employers’ associations, who explained to the new members of the Toledo Pact Commission of this legislature what they believe should be the willows of the upcoming reform and urged parliamentarians to reach an agreement on recommendations that will be used by the Government and the social partners to design it.

All of them agreed on one thing: the immediate need to end the gap between income and expenses of the system that already before the impact of the Coronavirus crisis amounted to around 19,000 million a year in deficit. To shorten these red numbers, employers and unions are asking that the State, through taxes, pay for the non-contributory Social Security expenses that are now paid with social contributions. Moreover, they consider that the next State Budgets should include measures aimed at this new separation of sources of financing (which has already been completed with the minimum supplements,)

From the UGT, Mari Carmen Barrera, indicated to the deputies that “Social Security cannot continue to pay what it does not owe, even though it has done so for many years. That is no longer possible or admissible ”. And specifically, he specified that they should not be paid with contributory contributions, whose destination is exclusively the benefits, the expenses of the employment policies, nor the reduction of contributions, nor the administrative management expenses of the Social Security, nor the recognition of a subsidized level of protection for certain groups ”. According to this, Social Security should stop paying between 8,000 and 10,000 million euros, which would only finance half of the annual deficit.

For his part, Carlos Bravo (CC OO) considered it urgent to “balance” the structural part of income and expenses and added: “We call on the Government so that in the 2021 Budgets there are first measures in this regard,” he said. In addition, he specified that the Social Security expenses caused by the impact of the Covid-19 pandemic be financed separately with the issuance of public debt and with European funds.

The business representatives were also in favor of the non-contributory expenses of Social Security passing to the State. It is, therefore, a recommendation that will not have difficulty seeing the light because that is how the previous members of the Toledo Pact had also understood it. Although the calendar for the transfer of the deficit to the State will be somewhat more difficult to specify.

But in addition to this transfer of part of the pension expenses to the tax system, it will be necessary to increase income further. To this end, the employer and trade union appearances also agreed on the need – already defended by the Minister of Social Security, José Luis Escrivá – to delay the effective retirement age, so that it gets closer and closer to the legal age in every moment.

“We, I want to say it clearly, are interested in addressing the problem of the differences between the effective age and the legal age,” said the UGT representative who, however, considered less priority to address the redesign or establishment of a sustainability factor , something that should not be studied until the structural deficit is closed, said Barrera.

For those responsible for CEOE, bringing the real or effective retirement age closer to the legal age is also desirable, although they considered that collective bargaining should play a leading role in this delay in retirements, reported business sources.

In addition, the employers’ technicians also requested the promotion of private pension plans. And the unions demanded again that the law fix the revaluation of pensions with the CPI if it is positive.

The last time that the Toledo Pact renewed its recommendations to reform the pension system was on December 29, 2010. Ten years have passed, although it had to be reviewed every five. In addition, the consensus of the first revisions of this pact was truncated in 2011. That year the PP voted against the reform of the pensions of the Socialist Government which, in compliance with the recommendations of the Toledo Pact, delayed the retirement age in a way progressive until age 67 and tightened general access to the pension. And two years later, the PSOE voted against the popular reform that toughened early retirement and created revaluation and sustainability factors.