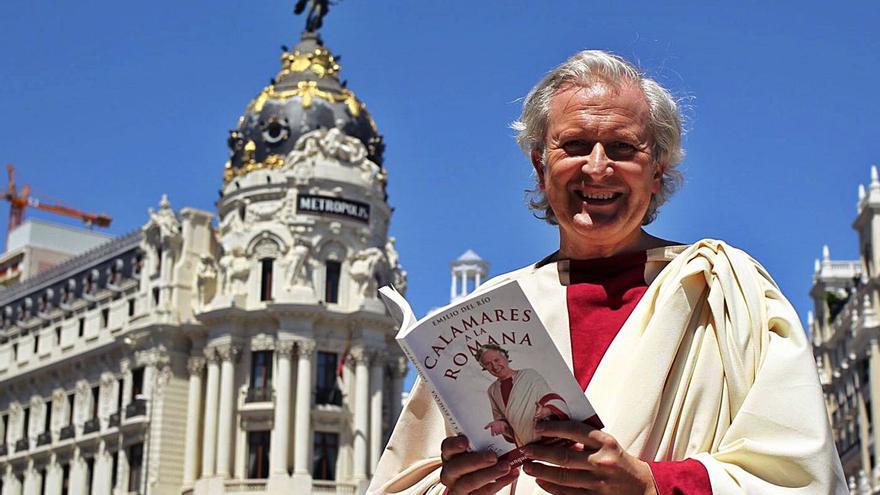 What advice would a Roman give us about the pandemic?

Stay home and prepare a good celebration for when the pandemic ends. All the vocabulary of the pandemic is Latin and Greek: pandemic, coronavirus, confinement, vaccine …

Are the classics taught well at school?

In Europe yes, but not in Spain. Spain is a great country, but we have to do what the great countries of the world do, which is to study the classics more.

Can the Roman world count on the Madrid scene?

There is nothing more modern than the Roman world, as evidenced by the fact that the daily life of classical Rome can be told with the titles of the songs with which the movida was sung: most of the chapter titles of Calamares a the roman are from song titles of the movida. I lived through that movement when I came to study in Madrid and it is a personal tribute to that extraordinarily creative and liberating spirit cultural movement.

Are the horns and the comb your heritage?

They loved them! And they loved having them at the bar counter. Since they did not eat at home, they ate in bars and restaurants, and they had fast food establishments which are an invention of the Romans! This Christmas in Pompeii an establishment of this type has been made public, where there were remains of food.

Latin is at the origin of Christmas carols. And the roscón …

Christmas takes its traditions and customs from the Roman Saturnalia festivals and celebrations for the Roman New Year. Among others, that of giving each other gifts, like us now in Reyes, or that of Roscón de Reyes. As for the Christmas carols, the first ones were in Latin, and there we have the Adeste Fideles.

Recommend a menu to salivate a Roman.

A good stew for example. The highly recommended Mediterranean diet is an invention of the Greeks and Romans.

Marcial was inspired by farts and Nero encouraged them …

Nero passed an edict to allow people to fart at meals, upon learning that a guest had fallen ill from farting. Our great Quevedo has a great poem dedicated to fart, based on the Latin poet Marcial.

Would Ovid be successful as a fashion influencer?

The latrine was ideal for gatherings …

The Romans socialized by shitting, yes, yes, in the latrines, they were toilets in a room, so while they were there with the chores, they talked about their things, they did business, they met for dinner …

It was a very patriarchal society, as society has been for thousands of years, but at the same time, there was divorce. In Spain it did not arrive until 1981.

Were there fashion catwalks?

We have your sexual vocabulary on the tip of our tongue …

The Romans were very wigs, both women and men, and the bald were very hairpieces. In the Middle Ages he attacked this capillary waste. But even the statues had their wigs changed!

Would the LGTBI collective have lived in peace in Rome?

In classical Rome there was homosexual marriage, something that humanity has taken thousands of years to recover. There are also homophobic attitudes.

Bread and Circus. Do we still dominate that?

Does the football hooligan have Roman ancestors?

The first hooligans were the Romans. They were much more than fans of their chariot teams, they were real hooligans, they hit each other and even killed in the stadiums. Like now, let’s go. I already said that for better and for worse, we are Romans.

If you traveled back in time and could wander through an intact Roman city, where would you go first?

I find it fascinating to get into the flats they lived in, in the blocks of flats up to 6 stories high. Or lean on the counter of a bar in the area of ​​bars that were in all Roman cities.

Does Donald Trump remind you of an emperor?

I can think of some and none of them are the best.

Was there fake news?

They were masters at making up news. Augusto was a true pioneer in that. The Romans were very clear that controlling information was controlling power.

Jesús Monzón sings to the Gran Canaria landscape from Tamadaba