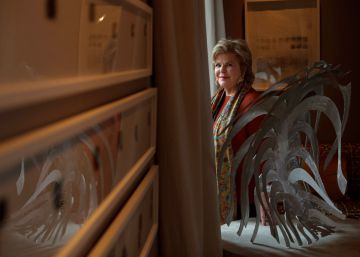 After nine years of conversations and two since Ella Fontanals-Cisneros (Havana, 75 years old) signed with Meñigo Méndez de Vigo a memorandum for the creation of a contemporary art center of the Americas in Tabacalera, the project has remained nothing. The collector and businesswoman of Cuban origin He announced this morning that “unfortunately” the donation of 400 works to the Spanish State will no longer take place, as he wanted. The drop that filled the glass of his patience came in the form of a letter last October when the then acting minister José Guirao explained that there were legal issues that prevented him from accepting the donation as it was raised, although it opened to will deliver the works without conditions.

The collector, who enjoys Spanish nationality, says that she has numerous offers to receive her collection -Seville or Miami among them-, but that her preferred scenario is still Madrid and that she is already exploring ways of private financing. Ella Fontanals-Cisneros’s collection exceeds 3,500 works, deposited in a Miami warehouse, except those that decorate their homes in Madrid, Mérida (Mexico) or New York.

The essential nuclei of everything that has been accumulating over time are the geometric abstraction of Latin America, international and Latin American contemporary art, contemporary video and modern and contemporary photography. Some of these works have been temporarily exhibited or deposited in museums such as the Tate Modern in London or the Reina Sofía in Madrid. Among its essential authors are Lygia Clark, Antonio Días, Jac Leirner, Luis Camnitzer, Gabriel Orozco, Sameer Makarius, Carlos Leppe, Lázaro A. Saavedra González, Félix González-Torres, Gustavo Pérez Monzón, Sandu Darie or Dolores (Loló) Soldevilla .

The announcement of the end of the negotiations has been made at his home in Madrid, a splendid house located next to the roundabout of Rubén Darío, in which he usually spends about five months a year. The rest is divided between Mexico and the United States because in these countries live their three daughters and their 10 grandchildren. In Caracas, the city where he lived with his ex-husband, the tycoon Oswaldo Cisneros, has not returned for 15 years.

After confessing his sadness about the situation, he replied that in Guirao’s letter there were several difficult things to accept. One of them was the claim that the collector pointed out exactly what were the 400 works he was willing to donate. Another has to do with the denomination of the future museum (the Ministry demanded that it be called an exhibition center) and the last one implied the requirement of the creation of a patronage in which, as in other museums or foundations, there was political representation. Cisneros is more in favor of having civil society representatives in a way, he argues, that the political fluctuations will not affect the government of the institution. “But more than the concrete details, what I perceived was a refusal to continue with the project. He missed me coming from a person like José Guirao, with knowledge in the plastic arts, ”he says.

As a summary of the situation, he adds that at no time have any of the governments with which he had to negotiate have disposed of the money or interest necessary to carry out the project. “They offered Tabacalera and it seemed very good to me,” he explains. “But the state of the building is disastrous and it took more than 10 million euros to put it in condition. They never had that money nor did they look for a special game to get it. ” Among the many politicians with whom he has had to deal with all this time, the collector states that he only saw real interest in Luis Cueto, general coordinator of the mayor of Manuela Carmena.

Would you change your mind if you receive a call from the Ministry of Culture? “Only in case they came with the check in hand to do those works. And I doubt it very much. A shame because along with the donation, I was willing to temporarily deposit 600 works by contemporary Cuban artists. ” At the moment he stays in Madrid for another month, until the end of the Arco fair, and in the meantime he will seek financing from some private company because he rules out building his own museum: “I tried twice in Miami and it was a failure. It didn’t work out. “

Ella Fontanals-Cisneros says that she has shared her concern with Manuel Borja-Villel, director of Reina Sofía, but that he cannot do anything. “In Tabacalera the temporary exhibition halls were going to be conditioned to become dependent on Reina Sofía, although nothing has been done either. The bureaucracy in Spain and everywhere is unbearable. ”