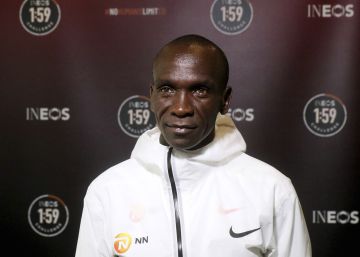 The Kenyan Eliud Kipchoge, a marathon world record (2h1m39s), has been shown on Thursday in Vienna calm and confident that it will overcome the challenge of lowering the marathon made to measure that will run this Saturday in Vienna. "I try to be calm, this brand means a lot to me and my continent, Africa, to make it clear that there are no limits, that the borders are marked by the mind," said the press conference. In case of overcoming the challenge and lowering the two hours, the record will not count for the International Athletics Federation (IAAF) for external aid, such as a windbreak vehicle, a customized supplies and the rotation of the 41 hares, which will count.

The 34-year-old Kenyan insisted that he run to enter history and to show that the human being has no limits. He even wanted to tear down the famous two-hour wall to his world record, achieved last year In Berlin. "Running in Berlin and in Vienna are two different things. In Berlin I ran And I broke a world record In Vienna I run to make history, "he summed up Kipchoge, who has renounced the Doha World Cups and the Marathon of The German capital for this challenge. This will be the second time that Kipchoge tries to be the first in running a marathon below two hours.

On May 5, 2017, at the Italian circuit of Monza, Kipchoge the fastest marathon in history has already been run with a non-comparable mark from 2h00: 25. That failure has given him the experience to run now with more confidence, because he knows what he is going to face. "I feel more prepared and more confident. I have run at that speed (to break the two hours) over the past two years, so it's not you have to ask me how I am going to do it ", summarizes the changes compared to 2017. The marathoner stressed again and again that his eagerness was sports glory and overcome an insurmountable barrier so far, and not money. In being a figure that inspires a whole new generation.

"I run to make history, to move forward, to show that there is no limits to a whole generation in the world, I hope you see it 3,000 million of people on Saturday. It's not about money, but about running, making history and change people's lives, "he said. The test, which will run alone but supported by 41 'hares', will take place in the Viennese park of the Prater, in a completely flat circuit of 9.6 kilometers, of which the vast majority of the route is straight. It will be 4.3 kilometers one way and many others back. At both ends there are two large roundabouts that have been adapted to avoid any unevenness.

Saturday will be the race but it remains to be determined the departure time, with the temporary fork between 05.00 and 09.00, because It is when better weather conditions are expected. The absence of wind and rain, a humidity below 80%, an ideal temperature between 9 and 11 degrees (although it is also optimal between 7 and 14 degrees throughout the test) are the best conditions for the challenge

The 34-year-old athlete has only been defeated on one occasion of a total of thirteen marathons -with a second place in Berlin 2013-, and boasts the world record, with 2h: 01: 39, a mark that the Ethiopian Kenenisa Bekele he stayed within 2 seconds of breaking into the Berlin marathon last 29 of September.