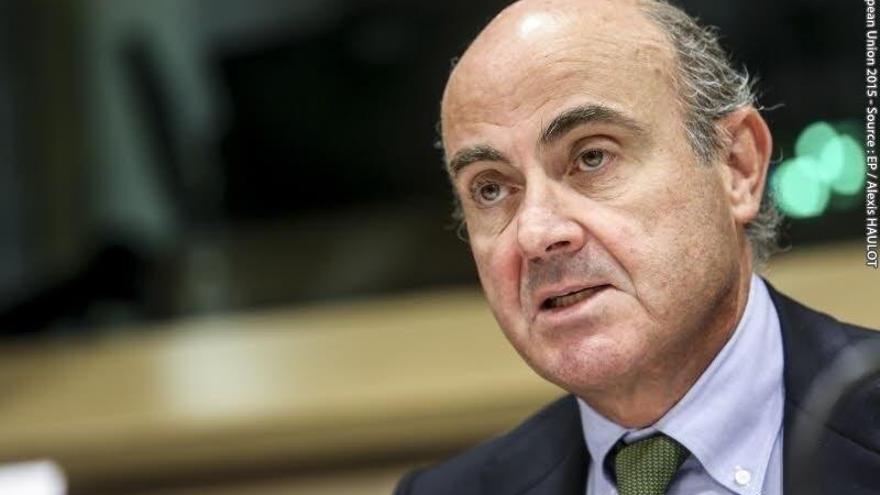 The vice president of the European Central Bank, Luis de Guindos, has again called on the banks on Monday to carry out plans to cut costs to face the low profitability of the business. “The need for cost reduction and the elimination of excess capacity is even more important than it was,” he pointed out, referring, without mentioning, to the branch network and bank staff.

De Guindos analyzed this Monday at a KPMG and Expansión forum held in Madrid the risks for the financial sector in the euro zone, avoiding direct allusions to Spanish banks. Except in one point. The number two of the ECB has indicated that it is, together with the Italian, the two markets where there is a greater fall in income from the banking sector. He warned that in Europe there is a “significant dispersion” between the decline in value of European banks.

In this context in which he has urged cost reduction and profitability improvement, Guindos has indicated that one way may be “consolidation”. That is, the mergers. The European Central Bank has been the great promoter in Europe of the discourse of the concentration of the sector to create bigger financial institutions with better solvency. However, it has warned that, although “it can help reduce costs”, it is “an instrument but not an end in itself”.

The vice president of the ECB has recognized three risks to the financial system due to the coronavirus pandemic. The first, he pointed out, is the “accumulation” of both sovereign and corporate debt. Regarding the latter, he pointed out that although there has not yet been a drop in the doubt ratings of companies in a generalized way, “there is a risk of insolvencies.” Regarding the first, he has urged states to return to the path of deficit and debt reduction when the economic crisis caused by COVID-19 is overcome. The second of the advanced risks has targeted the non-banking financial system, especially the situation of investment funds, where it has ensured that there have been situations of “tension” due to the lack of liquidity. And finally, he referred to the aforementioned loss of profitability in the banking business.

De Guindos has called on the governments of the euro zone to maintain the stimulus measures to “avoid a cliff effect.” In other words, “accompany” with these measures until there is an improvement in the economy, avoiding a sharp decline without these stimuli. “Without these actions the situation would have been much worse,” he stressed.

Santander stands out from the wave of bank mergers

The forum in which De Guindos has participated brings together the CEOs of the country’s large financial institutions throughout the day. One of the first to participate has been José Antonio Álvarez, number two at Banco Santander, who has disassociated his entity from the wave of mergers that has begun in the Spanish banking sector. “We are not interested, we do not look at anything, we have repeated it many times,” the Santander manager has emphatically settled. It has downplayed the fact that since it absorbed Popular, it has gone from being the first bank in the country to being the third when the union of CaixaBank and Bankia culminates. “I would be concerned if we had less than 10% market share, but we are around 20%,” he emphasized.

Less blunt has been Onur Genç, CEO of BBVA. The shift manager has indicated that the priority of the entity chaired by Carlos Torres is “to grow organically.” That is, without purchases. However, it has left the door open to “continue looking at opportunities, in Spain or wherever”, emphasizing that these opportunities should help “create value” and produce “synergies”.