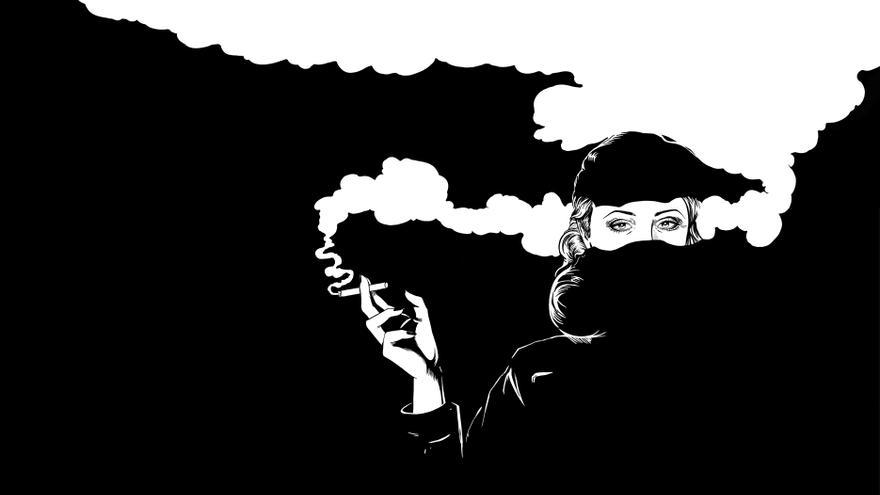 “The femme fatale is, like the Devil, a dissident,” says Elena Gallen, author of the devil is a woman (Lunwerg, 2021), a book that is much more than an essay: it is a spell, it is audacity, it is a work of art, it is a secret. Gallen, hand in hand with the illustrations by Sara Herranz, draws a path through the figure of the femme fatale from the beginning of time and its founding myths (such as Lilith or Salomé), passing through the stars of early Hollywood and reaching the Sharon Stone of basic instinct or the Charlotte Gainsbourg of antichrist. But it is not a film book, or not only: “It transcends the didactic, it has something existentialist, poetic, esoteric and, of course, political,” explains its author.

Returning to dissidence, the Helen played by Marlene Dietrich in the blond venus (1932) does not submit to her husband, nor to the law, nor to the millionaire who seeks her nor, if necessary, motherhood. Greta Garbo’s Elena in everyone’s land (1926) uses her beauty to manipulate men. Gallen, one more Elena in this story, explains that the femme fatale “wants to be an equal and does not bend before divine or, in her case, patriarchal authority. She is feared for her exercise of power and freedom, for her lack of limits, but above all because of the man’s inability to control or subdue her. She is, in reality, the reflection of the masculine fears of each era, even the masculine fears that women have assimilated”.

Elena Gallen (1984), also an artist and film director, video clips and advertising, in The devil is a woman her first book intertwines her life with that of other women; his self-discovery, with theirs. “We all tell the stories of others to talk about ourselves and I have been interested in the redemption of the figure of the femme fatale for years. That is why I slip through the mythological and cinematographic characters as the book evolves and I end up becoming one. I think it was inevitable because, as I write in the prologue and it is not a mere poetic device, the spirits of those women dwell in me. We are inside each other, “he says. “How many women will fit inside me?” He writes on the first pages.

Gallen undertakes a task of restoring the stereotype of the femme fatale, on which such a masculinized gaze has been cast that it has lost its original meaning: the woman who conquers her freedom with the tools at her disposal. A witch. “The femme fatale in the cinema is not the cause but the consequence of the structural and spiritual violence that has been exercised against women,” the author explains to elDiario.es. “As with Lilith at the genesis of humanity, it is when Adam tries to subdue her that she reveals herself and becomes a demon. What some see as perversity or monstrosity is a reaction to an imbalance, an extreme form of insurrection, of embracing personal power and strength that had previously been repressed. Or, as he writes in the text: the femme fatale it is “a magic mirror that reflects the male fears of each era”.

“The portrait that has been made of us in film and television has transcended the screen for more than a century and has an impact on society,” she warns. “Entertainment cinema is also political. And deconstructing the femme fatale and openly identifying with her is a way to end the demonization that has been done for years of power, ambition, success or female freedom.” And that is the objective pursued and achieved by his book, whose beauty and careful editing deserves to be reviewed.

The author shows concern for the ignorance of cinema prior to the Hays Code that imposed in Hollywood, from 1934, censorship on what was considered morally unacceptable. Although the stereotype of the femme fatale continues from that date, logically it has also been curtailed, domesticated, so that the productions known as precode (pre-Code) are fascinating and amazing terrain to find strong female characters that can continue to be a reference today.

“The ignorance of Hollywood pre code it’s pretty universal” and doesn’t depend on country or generation, says Gallen. “A lot of people think that the femme fatale in movies starts with Gilda And what I’m trying to do is convince you otherwise. I want them to see Louise Brooks in the 1920s dancing a tango with another woman.”

The book jumps from classic Hollywood to the “unintentional trilogy” that rewrote the femme fatale in the 1990s, all three featuring Michael Douglas: Fatal Attraction (1987), basic instinct (1992) and Bullying (1994), which the author interprets as a reflection of man’s terror of gender equality. From there, towards the horror cinema, where the woman appears as a monster, as a beast “that must be dominated to be loved” and thus unravel its mystery and deactivate its strength. In antichrist (2009) by Lars Von Trier, Charlotte Gainsbourg symbolizes the demonic female who descends into hell, the woman who goes from apparent normality to ultraviolence. Elena Gallen calls them “anti-Christians,” “not because they are, but because the movies heartbreakingly illustrate the demonization that patriarchy has made of female strength and independence,” she writes in the book.

“Satanic women of today’s cinema could be the character of Isabel Adjani in Possession,of Andrzej Żuławski, that of Scarlett Johansson in under the skin, of Jonathan Glazer, that of Charlotte Gainsbourg in antichrist or the ‘witches’ of the remake from sigh, by Luca Guadagnino. These are all contemporary films that I would recommend because they address women in poetic, transgressive and wild ways.”

Elena Gallen and Sara Herranz used to see each other at their neighborhood gym. There, Elena tormented Sara with her work crises. Sara had just published her illustrated edition of the broken woman (Lunwerg) by Simone de Beauvoir and was looking to work with another writer again. “She was aware that the theme of the femme fatale was a kind of personal crusade for me and she told me that we could publish a book with her publisher. So she chose me and not the other way around,” Elena recalls.

During the first months, they met to watch movies together and commented on the scenes they liked the most, reveals illustrator Sara Herranz. “As Elena was getting the drafts of the chapters, I was creating the first sketches”, explains Herranz, with a very different method than working “directly on a closed manuscript”. “It has been an arduous process, of making and unmaking illustrations, but very enriching,” he says.

The decision to accompany the text with an own work generated as a result of it and not with film stills, for example, is perhaps the most essential to convert the devil is a woman in such a particular and different book, so far removed from the orthodox essay. “On a graphic level, the most important thing was to free myself from the idea I had of the classic and stale representation of the femme fatale,” Sara develops.

“The most stimulating thing in the creation of the visual imagery for the book was that Sara had to leave her comfort zone, let herself be seduced by that more conceptual and darker universe that was that of my texts” explains Elena Gallen about the work of her partner. “While working on the book”, replies Sara Herranz, “I experienced a moment of transformation. I wanted to go one step further in my style, hence there are nods to the universe of Aubrey Beardsley or the art nouveau by Hans Christiansen, which are mixed with influences from the illustration pulp. It was necessary to flee from the clichés to show the duality that these characters have, to reflect the darkness of these women, but also their light”.