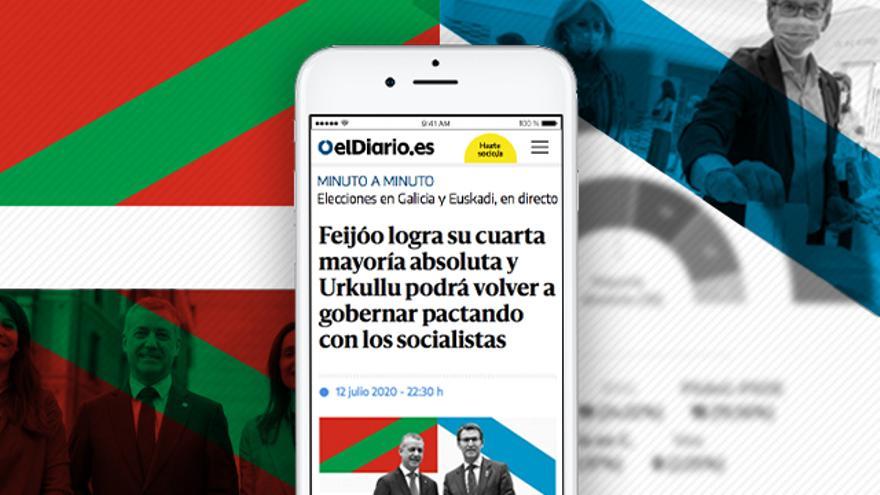 The momentous electoral appointments that Galicia and the Basque Country held in July placed elDiario.es as the digital native medium preferred by readers to find out about elections that were held in the midst of the pandemic after an initial postponement. This is indicated by the post-election polls for both elections, prepared by the Center for Sociological Research.

According to the CIS, elDiario.es was the native digital medium preferred by citizens to inform themselves during that period, occupying the top positions in the general press that offers news on the internet. elDiario.es/Galicia, whose newsroom began in March, ranks as the fourth most widely read newspaper in Galicia behind La Voz de Galicia, Faro de Vigo and the newspaper El País. Behind, many traditional newspapers such as El Mundo, ABC, La Vanguardia, La Razón, El Correo Gallego or El Progreso de Lugo. Among digital native media, elDiario.es occupies the first position in Galicia, according to the CIS study.

elDiario.es/Euskadi is the digital native medium by which the Basques most opted for information in the last electoral campaign, according to the post-electoral study released this Wednesday by the CIS. The same survey places this newspaper – which undertook a comprehensive redesign just before the elections – as the fifth in the whole of Euskadi very close to a head such as Deia and above Gara or Berria.

This survey confirms the constant growth in audience registered by elDiario.es/Euskadi in 2020. The Basque edition of elDiario.es – which has released new formats and sections in recent months and which has the informative alerts on Telegram with more followers in Spanish in the Basque Country – it will continue its commitment to its own content in the Basque Country under the umbrella of a project such as elDiario.es with increasing prestige and with a growing community of partners that preserves its independence.

In this blog we will tell you from within all the news about the eldiario.es project. You can write us in the comments or at contacto@eldiario.es.