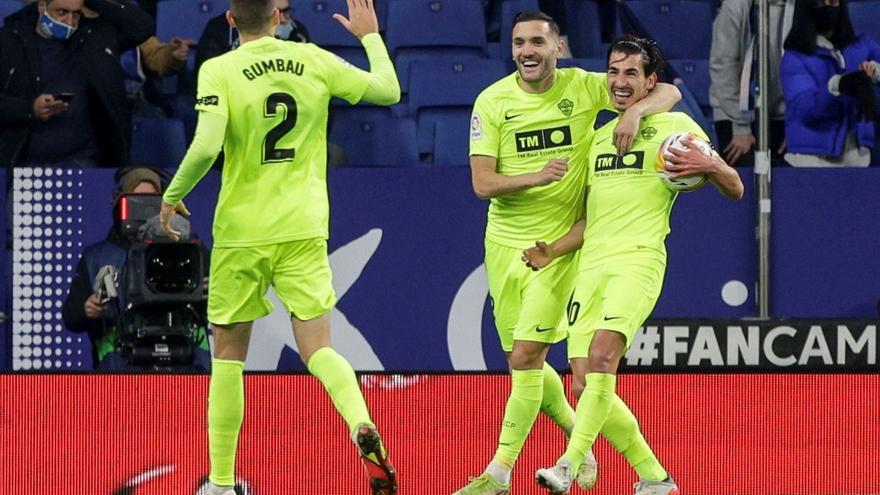 The Elche scored three key points against him Spanish (1-2) at the RCDE Stadium, where the host had only lost once so far in this league, with two goals from Pere Milla in minutes 6 and 14 that annulled Raúl de Tomás' penalty goal in minute 45.

Elche dislodged Espanyol after six minutes. Pere Milla, without excessive opposition from the Blue and White defense, forcefully finished off a Morente center from the right wing. It was the first act of the show that the ilerdense player would sign.

The team from Elche took advantage of their dominance and looked for the KO at the RCDE Stadium, who saw how their defense continued with gaps. Pere Milla, again, scored at 14 the second of the night. He took advantage of a center from Mojica from the center of the area to beat Joan García.

The locals tried to react and sent a serious warning to Elche with a goal disallowed to Loren for offside in the 26th minute. It was not the best clash of the parakeets, accustomed until now to dominate with authority in their stadium.

Espanyol insisted until they got the award. A penalty from Verdú for a foul on Baré was thrown by Raúl de Tomás to a squad, unstoppable for Edgar Badía. The maximum penalty was much protested by the visiting footballers.

In the resumption, those of Vicente Moreno increased their presence in the rival area, although without the forcefulness necessary to break the tranquility of Elche. The coach moved the bench looking for a reaction.

The host's crossings and arrivals, though insistent, were not conspicuous for their precision and Elche did not have excessive problems to control the advantage in the light without taking many risks before Espanyol increasingly anxious about the pressure of the clock.

In the last minutes, Moreno put all the meat on the grill giving entry to Carreras and Fran Mérida. RDT had a direct free kick in the 90th minute that concentrated all the hopes of Espanyol and sent it to the barrier. It was not the day for parakeets.

Incidents: Match corresponding to the twentieth day of LaLiga Santander played at the RCDE Stadium before 11,870 spectators.