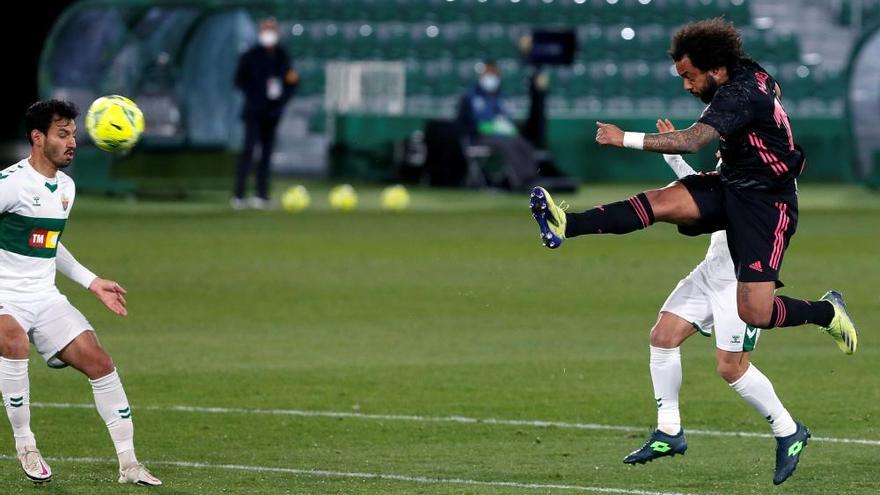 He Elche managed to stop the triumphal march of Real Madrid (1-1) after a match in which the team from Elche knew how to recover from the good first half of their rival, which went from less to more in the game.

Zinedine Zidane’s team was clear dominator of the game in the first 45 minutes, but after Elche’s draw, scored from a penalty, he got stuck and he was already unable to overcome Edgar Badía, who made several stops of merit.

The meeting started according to the planned script. Real Madrid assumed the monopoly of the ball against a retracted Elche and that had in Lucas Boyé his only offensive reference. Zidane’s team, who already threatened in the second minute with a header from Kroos, set a slow but constant hunting rhythm, continuously hitting the rises of their sides to try to open the local defense.

El Elche, sheltered near your area, had his choice in a solo Rigoni adventure, the most upright player on his team, whose shot close to the post was cleared by Courtois at a corner. Real Madrid’s reaction was immediate and Marcelo, one of the newcomers in the line-up, brushed against the goal with a great shot that crashed off the crossbar.

The Madrid team finally found the prize after a loss of the ball by Elche. Asensio took advantage of the space to go deeper and shoot the crossbar again, but this time the rebound was picked up by Modric to head the ball into the net. The goal did not change the drift of the game, controlled comfortably by Real Madrid, who without much fanfare touched the second goal on several occasions. He was even on the verge of having a penalty in favor for possible hands from Victor, an action immediately corrected by the VAR.

Only Rigoni, who knew how to exploit Marcelo’s defensive weaknesses, showed some rebellion, but the Argentine did not find partners to shake the Madrid defense. Elche, with a more offensive pose, managed to balance the game in the first minutes of the second act. As a result of this improvement, Carvajal’s penalty against Barragán came, transformed into a goal by Fidel.

The draw woke up Madrid, which was in a rush, and gave Elche confidence, which was about to score the second with a shot from Boyé that hit the post. Slowly Madrid again tilted the game. Carvajal had the option to retaliate after a great pass from Kroos, but the side’s shot found a great save from Badía in response. Again the Catalan goalkeeper saved his team with a point-blank stop to Ramos.

Zidane appealed to Hazard, Valverde and Vinicius to reactivate his attack and Madrid came to completely dominate the game in the last minutes, with Ramos even as a center forward, but Elche defended themselves with order and sacrifice. Even the team from Elche had the option to take the three points in the discount with a shot by Gonzalo Verdú that Courtois took from the angle.

Referee: Figueroa Vázquez (Andalusian Committee). He showed a yellow card to Sergio Ramos, Casemiro, Carvajal and Kroos for Real Madrid, and to Gonzalo Verdú for Elche.

Incidents: Match corresponding to the sixteenth day of the Santander League played at the Martínez Valero stadium behind closed doors.