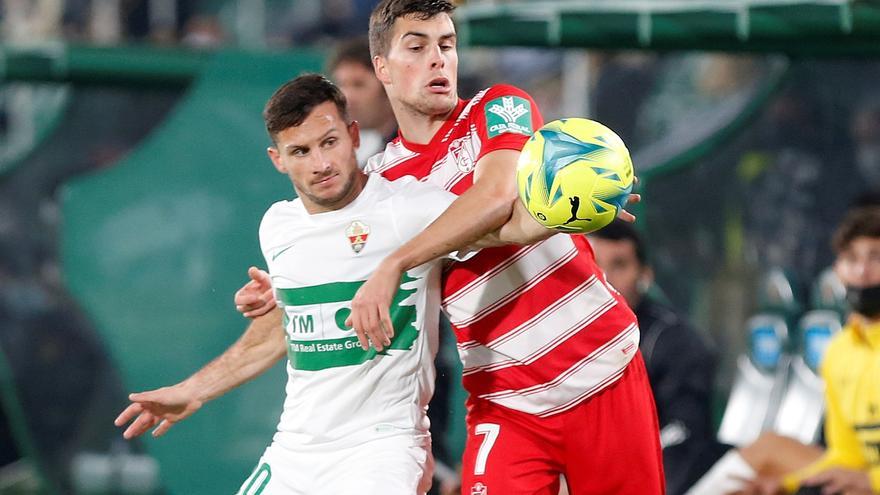 The Elche managed to save a point before grenade (0-0) despite playing almost the entire second half at a disadvantage for the expulsion of Diego González after a meeting marked by controversy, as the local team saw how the referee canceled a goal and did not indicate a possible penalty.

The team from Elche, who dominated in the first half, only went through great difficulties to keep the draw in the last moments of the match, in which the Andalusian team turned to look for a goal that the Colombian had very close to. Luis Suarez.

Elche, despite the numerous absences due to covid, He faced the game with determination and impudence. The Elche team pressed the ball out of Granada and tried to hit the wings again and again to feed Guido Carillo, their offensive reference, with centers.

Granada was slow to tame the game, although on the first occasion in which it was able to chew an attack action it generated its best chance after a shot from Antonio Puertas that Edgar Badía cleared.

The group from Elche, who had already tried their luck with distant shots of Morente and Mascarell he found the goal, albeit ephemeral, through Guido Carrillo.

The Argentine picked up the ball after a crossbar reject to push it with the sole of his foot to the net, although the referee decided, after reviewing the images, to cancel the goal for a dangerous play action on the Granada goalkeeper.

The action did not detract Elche, which continued to try with arrivals by the Morente band and centers in the area of Mojica and Fidel. Granada, meanwhile, only threatened sporadic actions by Luis Suárez and Puertas, who never managed to connect with their attack partners.

An action from Elche-Granada. EFE

The game ended up getting muddy in the last minutes of the first half, in which the referee did not see a penalty shot from Maximiano on Carillo's face after a shot from the Argentine.

The action unleashed the anger of the stands and the protests of the Elche players and their coach, Francisco Rodriguez, who ended up expelled.

The second half could not start worse for Elche, who lost by direct red to Diego González, one minute into the game, for knocking down Colombian Luis Suárez in an action in which the center-back lost the ball in a zone of maximum risk.

The expulsion gave wings to Granada, that shortly after he had the option to go ahead on the scoreboard with a shot by Luis Suárez that Badía caught.

Francisco, already from the stands, restructured his team with the entry of Gozalo Verdú for a blurred Pastore, and Elche managed to stabilize the game and even get around the goal through Fidel and Mascarell.

Granada, increasingly imprecise, hardly generated danger beyond the individual actions of Luis Suárez, while Elche decided to defend themselves with the ball, stretching their possessions and avoiding committing mistakes in risk area.

Pere Milla, In a great personal action, he was about to overtake Elche, but he met Maximiano, who covered well in hand-to-hand with the Catalan striker.

Already in the last minutes, the entrance of Soro and Isma Ruiz It gave the Andalusian team more dynamism and verticality. Granada pressed and circled the goal in various actions, especially in discount, but Edgar Badía saved his team after a shot by Luis Suárez.

Referee: Cordero Vega (Cantabrian Committee). He showed a yellow card to Fidel, Morente and Pastore for Elche, and Machís, Luis Suárez and Quini for Granada. He sent off Elche coach Francisco Rodríguez with a red card in the 45th minute for protesting, and Diego González (min. 46).

Incidents: Match corresponding to the nineteenth day of the Santander League championship played at the Martínez Valero in front of 12,160 spectators.