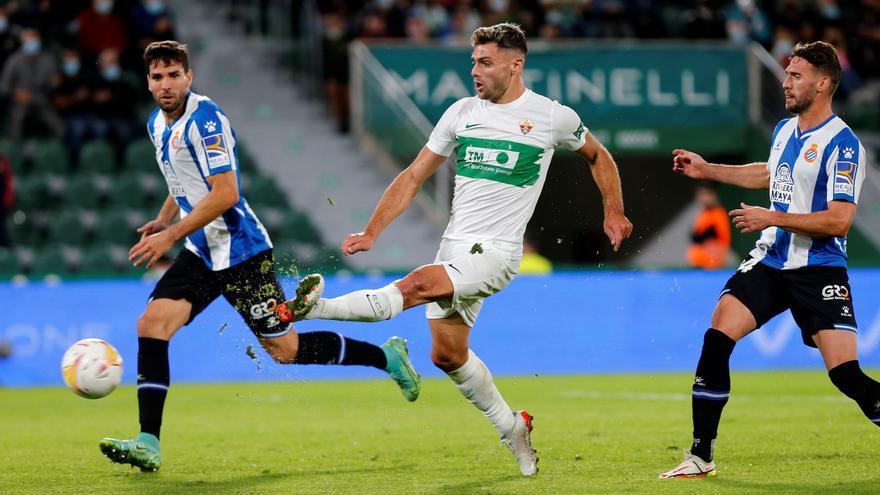 A goal from the Argentine Darius Benedetto in the last minutes he prevented the Spanish consummate his comeback at the Martínez Valero and allows the Elche save a point and maintain undefeated status in his stadium after the tie at two goals.

Vicente Moreno’s team, which still does not win at home, knew how to rebuild a first part in which Elche was superior to turn the result around in two minutes, but did not close the match and allowed the local team to find the prize of the tie in an isolated action.

The technician of the Elche, Fran Scribe, He surprised at the beginning with his approach by betting on Pastore as a left inside, with the aim of freeing the lane for Mojica, and relocating Fidel on the right wing.

The game started at a frenetic pace, with the two teams arriving in the rival area, although Elche soon tamed the game and tipped the field towards the goal of the Catalan team.

Elche he took over the ball and hit the wings again and again with Mojica and Fidel before a crouched Espanyol waiting for a counterattack that never came to fruition.

The good game and the initiative of Elche materialized in several dangerous arrivals. Fidel saw how the referee canceled a goal for offside, but there was no time for lamentations because shortly after Lucas Boyé made the first goal of the game.

The Argentine took advantage of a bad exit of the ball from Espanyol from behind to steal the ball from David López, advance towards the front and shoot a low shot that the visiting goalkeeper could not reach.

Elche took a step back and gave the initiative to the Catalan team, but without generating any danger on Kiko Casilla’s goal. Raúl de Tomás, well guarded, barely had a leading role, like the Chinese Wu Lei, swallowed up by the local defensive network.

The game script changed radically after passing through the changing rooms. The changes made by Vicente Moreno gave Espanyol another air, which only needed five minutes to lock up Elche and turn the result around.

An image of Elche – Espanyol. EFE

Morlanes, one of the replacements, equalized with a shot from outside the area taking advantage of the fact that Elche was very sunk in their area. With Elche still on the canvas, Raúl de Tomás scored a goal at the far post, a precise pass from Pedrosa from a wing.

Espanyol was still able to make the biggest wound, since seconds later, and with Elche completely gone from the game, Kiko Casilla saved the third after a cross shot from Raúl de Tomás.

Escribá tried to revitalize his team with a triple change and another game system, although it was Espanyol again that was closest to the goal with a Cabrera header to the crossbar.

Espanyol defended their advantage by taking over the ball and playing close to the area against an inferior Elche who, however, found the equalizer seven minutes from the end after a bad rejection by the visiting defense that Benedetto took advantage of.

The game opened in the final minutes and Embarba had the option, on a free kick, to return the advantage to his team, but Casilla avoided it. Elche was also able to win in the discount after a shot by Pere Milla that Diego López saved.

Referee: Figueroa Vázquez (Andalusian Committee). He showed a yellow card to Gonzalo Verdú, Palacios and Bigas, for Elche; and Diego López, from Espanyol.

Incidents: Match corresponding to the tenth day of LaLiga Santander played at the Martínez Valero stadium before 13,419 spectators. The Espanyol players took to the field wearing a shirt with the message “Anims Gori” in reference to the serious knee injury suffered by a player from their quarry.