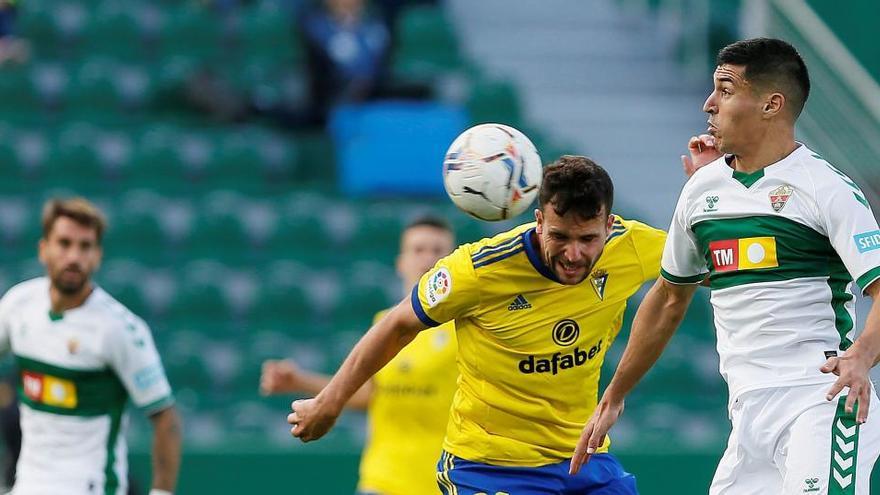 Elche and Cádiz drew this Saturday (1-1) in a match in which the Elche team knew how to resist the harassment of its rival after having stayed with one less player during the entire second half after Lucas Boyé was sent off.

The local team, which had advanced with a bit of Boyé, He knew how to suffer to contain a rival who completely dominated the game, but did not have the clarity necessary to transform his superiority into scoring occasions.

Cádiz started better, whose high pressure on the exit of the ball from Elche put the Elche team in trouble, unable to make the attackers carry the ball in conditions.

After several errors in the creation zone, Elche chose not to risk and the match entered a phase without either team, more concerned with guarding the rival than creating, they will step on the areas with danger.

Pere Milla was in charge of breaking the non-aggression pact, with a distant shot, at 35 minutes, which almost ended in a goal after slip the ball from the hands of goalkeeper Ledesma.

Immediately afterwards, the Cádiz goalkeeper made up for his mistake with a successful clearance after a header from central Diego González. These two actions encouraged Elche, who managed to open the scoring in minute 37 after a great personal action by Lucas Boyé.

The Argentine became from then on the protagonist of the game, since shortly after he saw how the referee penalized a slight push yours on Jonsson.

At the request of the VAR, Del Cerro Grande rectified his decision and annulled the maximum penalty, although the referee again crossed Boyé’s path, already in the discount, to show him the second yellow, and the consequent expulsion, for an elbow to a rival.

After the break, Cádiz assumed absolute control of the game against a very withdrawn Elche who gave up the ball. Salvi warned with several arrivals by band that they did not find a shot, but the goal ended up arriving after a center from Perea that Álvaro headed the net from Elche.

Almirón reacted and gave entry to Guti and Fidel to regain possession of the ball, while Cervera, who placed Perea at the forefront of offensive operations, opted to give energy and speed to his attack with Adekanye and Bodiger.

Elche knew how to suffer and managed to balance the game at times, brushing past the goal in two shots from Fidel. Cádiz appealed to patience and at the touch to find the hole in the Elche defense.

Álvaro, after several rejections, scored again, but the referee canceled the goal due to the previous hand of the Cádiz attacker. The Cadiz team never stopped trying, but without creating too much stress for an Elche sheltered in your area.

The tie was a lesser evil for both teams, who add one more day without achieving victory.

Referee: Del Cerro Grande (Madrid Committee). Gonzalo Verdú showed a yellow card to Elche players; Pere Milla, Marcone, Tete Morente and Lucas Boyé (2), for which he was sent off in the 48th minute of the first half, and his coach, Jorge Almirón, and Alex Fernández and Jonsson for Cádiz.

Incidents: Meeting corresponding to the eleventh day of the Santander League played at the Martínez Valero stadium behind closed doors. In the run-up to the match, a minute’s silence was observed due to the recent death of Diego Armando Maradona, former captain of the Argentine soccer team.