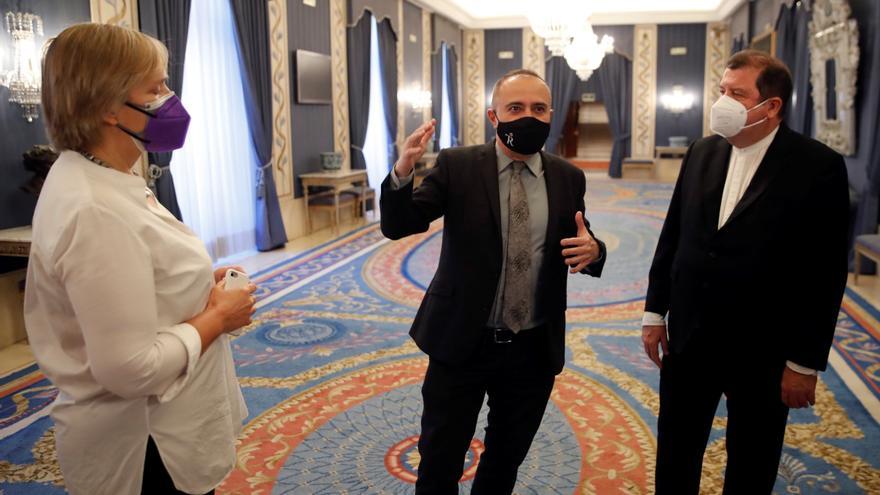 Madrid, Apr 12 (EFE) .- Covered by the medical committee constituted since its reopening in the middle of the covid-19 pandemic, the Teatro Real has defended today that there was no concealment of data on the “outbreak” notified by the Community of Madrid, but “scrupulous compliance with the protocol and continuous health control through tests.”

“Honestly, in all this time that we have advised them there has been no problem; among us we have even commented on the exaggeration of the measures they were taking, because they exceeded everything we could propose,” said Dr. Santiago Moreno, chief of the infectious diseases service of the Ramón y Cajal Hospital.

In his capacity as president of the committee that has advised them since the reopening in 2020 for “La Traviata”, he participated this Monday in a press conference together with the president of the Real Board of Trustees, Gregorio Marañón; the general director of the institution, Ignacio García-Belenguer, and the artistic director, Joan Matabosch.

The meeting with the press has occurred after confirming and considering “controlled” the outbreak that last March caused “15 positives” for covid-19 among its direct staff and 9 others in the choir, which is made up of employees of an external company, Intermezzo.

“The Teatro Real today is a safe theater, for its workers and for the public, with all the guarantees despite what has been said. Because we have worked on it, because we have the advice of a magnificent committee doctor and because the CAM has not raised insecurity or closure at any time, “García-Belenguer reaffirmed.

To prove it, he has presented the last 121 tests carried out this Saturday to his team, all with negative results, to which another 72 will be added this afternoon in order to have everything ready for the premiere on April 19 of his next assembly, ” Peter Grimes “.

The invoices of the tests carried out on both the members of the choir and the staff and artistic cast of the Teatro Real since last August have also been exhibited, analysis that has been increasing “as the general context has changed” and for example, a medical prescription is no longer necessary for its realization.

“There has been enough evidence”, García-Belenguer insisted, placing 1,194 those carried out on members of the choir and 4,882 on Real’s staff, tests that have been carried out especially after vacation periods and that, between PCR and antigens , have become more abundant in recent weeks.

In fact, only in April 212 have already been carried out (to which the 72 today will be added), the results of which have defended that the Community of Madrid knows in real time.

“In no case has there been any concealment of data. Coordination has been absolute with the CAM and the CAM itself has said so in its statement,” stressed the general director.

In any case, they have specified, the disparity in the number of positives between the Madrid operatic coliseum and those managed by the Ministry of Health corresponding to March, the month of the outbreak, was due to the fact that “the Royal did a wrong deductive work” with some of them, for example in the case of two already vaccinated people who tested positive.

“Be that as it may, the CAM received the data, began its tracking, and a sense of tranquility was transmitted to us,” García-Belenguer insisted on a situation in which, based on his data, the cases were not understood “as an occupational contagion, but probably familiar. ”

Dr. Moreno has wanted to clarify the importance of the declaration of an outbreak: “We use it to refer to the need to investigate what is happening in a specific place because the expected average is exceeded, which does not mean a peculiarly dangerous situation; We should have talked about outbreaks every day in the hospitals until they vaccinated the medical staff. ”

In his defense of the measures applied by the Real, he recalled that the distance maintained between the staff is two meters (and not a meter and a half), that most of the positives were asymptomatic and detected by the controls and that in each case that person has been isolated until the PCR is negative (and not until 10 days after the positive, as is done in other cases).

“It has been possible to do here what is not possible in other places, that is, to prevent transmission and preserve activity. Imagine that this could have been done in Spain and everywhere, that there was the option and the desire to do it” , it is finished.

In this sense, Marañón has contrasted the decision of the Real, “more difficult and economically expensive”, with the one taken by the Stockholm Opera, which will close its doors one month after discovering 15 infected people.

“I fully respect him, but at Real we know that, in a case like this, those 15 people can also be immediately isolated, continue to strictly apply the strict protocols that we have established ourselves and do from that moment on to the rest of the squad. daily tests to make sure that infection ended there, “he said.