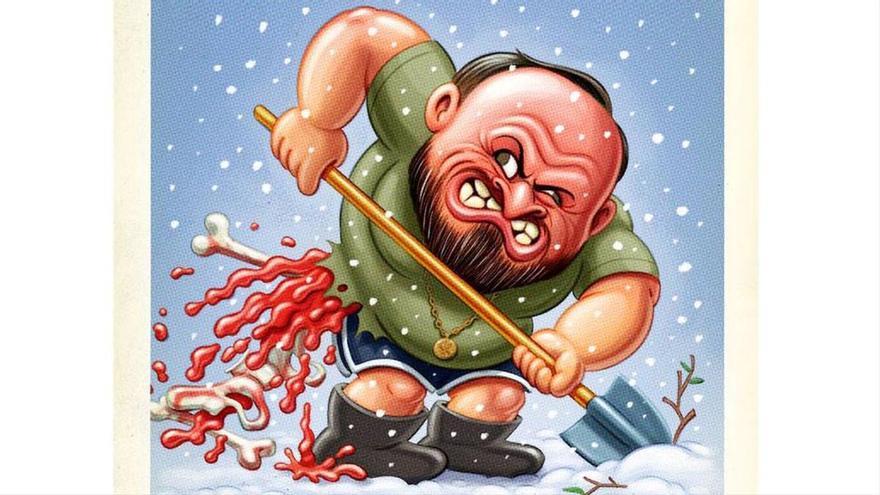 His name is Ricardo Rodrigo Amar and he is president of RBA, a group that publishes El Jueves.

His magazine spreads hatred against millions of Spaniards on a daily basis.

It is possible that many of them begin to demand responsibilities when they see you leave your office on the Diagonal in Barcelona. https://t.co/nvzLH9OLle pic.twitter.com/TgnhqExyh7

For Martínez-Vela, the fact of practically putting the editor on the bullseye crosses red lines. “It is something typical of thugs and it is what they already have us used to. And the worrying thing is that we get used to it”, alert. On the part of RBA, neither the editor nor the publishing company will make any statement or response to Vox, a spokesperson for the group tells this newspaper, which assumes that “it is not the first time” that they have received threats. In memory is the assault on the former director of ‘El Jueves’ Mayte Quílez, which in 2016 a hooded man punched in front of the portal of his house in Barcelona after a cover of the magazine against the rise of fascism.

Although Vox later denied that his intention with the tweet was to target the editor of RBA, some of his followers jumped into the ring, such as deputy Carla Toscano, who tweeted: “@eljueves, here the only garbage is you.”

.@Thursday, here the only garbage is you. https://t.co/xjw9Mh6S7E

But in the networks, what has generated the most the tweet is a growing wave of reactions of indignation against the party of Santiago Abascal and Javier Ortega Smith and of solidarity with the magazine. From a statement from ‘The Today World‘, where the satirical digital medium warns that “this threat” marks “a red line” and “has the ultimate objective of threatening the freedom of expression of editors, communication owners, comedians, artists and, ultimately, of any citizen” , to the manifesto ‘Vignettes against fascism’, where the world of comics invites you to join, through the magazine ‘Mongolia’, Reporters without Borders or the Federation of Associations of Journalists of Spain (FAPE), among others. And personally, a multitude of authors and people from the world of culture, including Albert Monteys, Manel Fontdevila, Mayte Quílez, José Luis Martín, Santiago Segura or Carla Berrocal, but also from publishing, journalism and politics.

Statement from El Mundo Today in reference to the very serious tweet published by Vox. pic.twitter.com/9z8mCCQ4TD

The cartoons of ‘El Jueves’ that have caused the tweet – a series of satirical stickers with the title of ‘Pandilla Voxura’, evoking the popular Garbage Gang of the 80s, in what the cartoonists Raúl Salazar and Juanjo Cuerda They parody various leaders of Vox-, they published them last February and they have been refloating them on the open web, recalls Martínez-Vela. In a tweet from the magazine he encouraged this Monday to see the stickers – “Discover and collect the whole disgusting Voxura Gang!” -. “Now I think they have stuck to it because it was good for them to say that we foment hatred against them and to play the victims. In that tweet they know very well what they say and what their unconditional followers will understand, just as Trump did before the assault on the Capitol. If you know how to communicate, you don’t need to be more explicit. And justice should know how to read those intentions – says the director. But I think that justice has a very strong bias. We have seen it before him Vox poster of the ‘menas’, that the judges do not see that it constitutes a crime of hate or discrimination, although it seems obvious to me. In their writing they only need to ask for the vote for Abascal “.

Salazar is not surprised by threats, that both the magazine and him on his particular Twitter account are sadly common. Even anonymous accounts have pointed to his son.

Why don’t I upload photos of my child on social media? Among other things BECAUSE NAZIS pic.twitter.com/3l9dnFPUoP

“This party behaves more like a street gang of thugs, who point out and then their supporters come. The surprising thing is that they do it from the official account and not for example from the account of a party headquarters, with which they can always claim a skid. And the worrying thing is that society can accept it as something normal. We are normalizing media harassment. If the normal thing in Twitter is to insult and people do it habitually, it is normal that those who follow them think that it represents them and that there is no reason to censor, “considers the co-author of the Voxura Gang.

“If we don’t say anything, the Vox speech will continue to advance Martinez-Vela advises. It is necessary to disarticulate their arguments and their techniques of putting emotions before reason, of misinforming with hoaxes on WhatsApp or networks … that’s what the kings are. In Germany or France we see that the extreme right begins to prick. So we must continue to face them with the debate, opposing arguments and unmasking them, making people inform themselves well. I think there are many people who support this party and are not aware of what it means. People who think that calling them totalitarians or fascists is a gratuitous insult. But they are a danger and they are gaining space in the public debate with their intoxicating techniques. “Therefore, Salazar agrees,” it is necessary that the social response leaves its mark and that this is noticed in the next elections so that it is deflated. ”

We greatly appreciate all the shows of support. The next time we have a trial we will call all of you as witnesses.

A hug also to the people who keep mentioning us explaining how irrelevant we are. I wish you could understand the irony, but.

It is not the first time that the Spanish extreme right has threatened a satirical medium. Just remember that in 1977 intimidations of this type, for a cover about Franco, culminated in the bomb sent by the ultra Triple A group to the editorial office of the magazine ‘El Papus’ in Barcelona killing the janitor and injuring several more people. Or, as Salazar points out, when in 1940 Franco shot the Valencian editor Vicent Miguel Carceller and the cartoonist Carlos Gómez, ‘Bluff’, for some satirical cartoons in the magazine ‘The fireworks’.

“The best way to show that they cannot beat us or twist us is to continue doing what we do,” affirm both cartoonists, already preparing the next issue of the magazine. “They give us a lot of meat,” concludes Salazar.