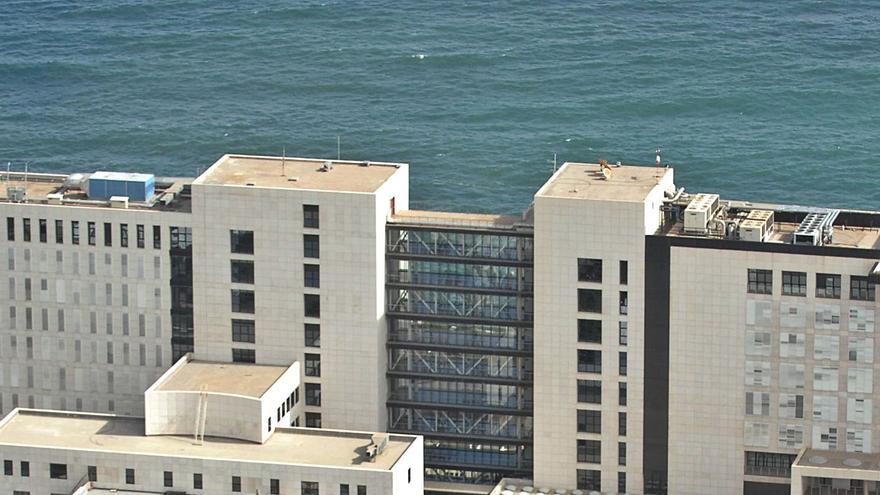 A new Covid-19 outbreak registered in the South wing of the eighth floor of the Hospital Universitario Insular de Gran Canaria – dedicated to Internal Medicine – which, for the moment, affects five patients and three workers, has led the center to also restrict the income in this space. This was reported yesterday by the Ministry of Health of the Government of the Canary Islands, which also reported the death of another of the patients who contracted the pathology, after a focus was declared last weekend in the North wing of the fourth floor – assigned a Palliative Care and Nephrology–.

The death occurred yesterday and corresponds to an elderly person with serious previous pathologies. In this way, the count of deaths linked to the first case rises to three and that of infected health workers remains at 11. Taking into account the number of deaths, right now there are ten patients affected by the first outbreak. With the new registry of the source of infection, in total, there are already 29 people affected.

As indicated by the health administration, the new infected patients have been transferred to the Covid areas of the complex, while the health workers are quarantined at their homes. For its part, the management of the Gran Canaria hospital is carrying out the investigation of this last focus and has already activated all the necessary measures to control the conflict.

To do this, the protocol that was used at the same time the first in-hospital outbreak was declared is being followed, and a screening of the entire plant is already being carried out, in addition to a study of the close contacts of each of those affected . To this we must add the cleaning and disinfection tasks.

However, already last Wednesday the managing director of the Insular-Maternal-Infant University Hospital Complex (Chuimi), Alejandra Torres, announced the intention of extrapolating the screening to all the plants in the center, given the event that occurred over the weekend in the area of Nephrology and Palliatives. An action that, according to their forecasts, would begin “in the next few days.”

It should be remembered that since noon on Wednesday, the center decided to prohibit all visits to the Hospitalization areas, as a preventive measure, following the recommendations of the General Directorate of Public Health.

That same day, Torres confirmed the death of two patients affected by the first outbreak. The first of them took place last Friday and corresponded to the first person who noted symptoms linked to the pathogen and for whom the case study was started. However, it was not until Wednesday when the center learned of the results of the investigation, which made it impossible to communicate the death in advance. The second death was registered during the early hours of the same Wednesday.

Specifically, it was on Sunday when the Ministry confirmed the existence of an outbreak in the north wing of the fourth floor of the Insular. At that time, there were seven patients – six, actually, due to a death already occurring – and three health workers affected by the situation. Just a day later, the numbers rose to 11 and five, respectively.

On Tuesday, the same number of infected patients was found and that of workers rose to nine, while on Wednesday the number was estimated at 11 for the two groups, after computing a new patient and lamenting another death.

At first, Health indicated that it was on Saturday when a person began to manifest suspicious symptoms. However, the person in charge of the management of the Chuimi clarified that this episode happened during the day of last Thursday, the 10th, and that it was not “until Saturday” when the outbreak was declared. This fact implied that the center made the decision to close the fourth plant to new admissions, during the Sunday day, as more positive diagnoses in the ailment were known.

The truth is that the context worries many of the specialists who carry out their functions at the Insular Hospital. “We feel unprotected. They only provide us with a surgical mask and we have to bring the FFP2 from home, which are the ones that truly protect, ”some doctors report. “They reserve the filtering masks and the rest of the personal protective equipment for procedures with aerosols or to treat patients with Covid,” they continue, “but now there are in-hospital outbreaks and the virus may be spread throughout various areas of the center.”

The same sources also call it “nonsense” that they have not been given a Polymerase Chain Reaction (PCR) test when they return from their vacation. “We feel a lot of fear and uneasiness, not even temperature controls are carried out, nor has it been established the obligation to clean hands at the entrance of the hospital.”

But fear also accompanies them outside the professional sphere. “We are afraid of contracting the condition and infecting our friends, children or partners. Sometimes, we have to hide that we have been in contact with Covid patients due to the feeling of misunderstanding and even rejection. It is very hard and fear is widespread ”, they lament.

For all this, they ask the management of the complex to take “effective measures” to be able to contain the effects of this pandemic and ensure the safety of health workers and the patients themselves.The Canary Islands Government Council has authorized the Ministry of Health of the regional Executive to make an expense of 6,654,220.29 euros to extend the cleaning service contract in health centers and administrative units that the Canary Islands Health Service (SCS) has signed with Clece. It affects four of its lots. As reported by the regional government, these are lots six, seven, eight and 13, corresponding, in this order, to the Insular-Maternal-Infant University Hospital Complex, which will be extended from January 1 to April 30, 2021, for a amount of 2,178,022.45 euros; and the Nuestra Señora de Candelaria University Hospital, which will be extended from January 1 to May 31, 2021, for 3,362,116.64 euros.

It also includes the General Hospital of La Palma, Primary Care centers on that Island and the Health Area Directorate, which will be extended from January 1 to May 31, 2021, for 931,400.29 euros; and to the administrative offices, headquarters of the health areas of Gran Canaria and Tenerife and the Inspection of Tenerife, a lot that will be extended from January 1 to April 30, 2021, for an amount of 181,681.23 euros. | Europa Press