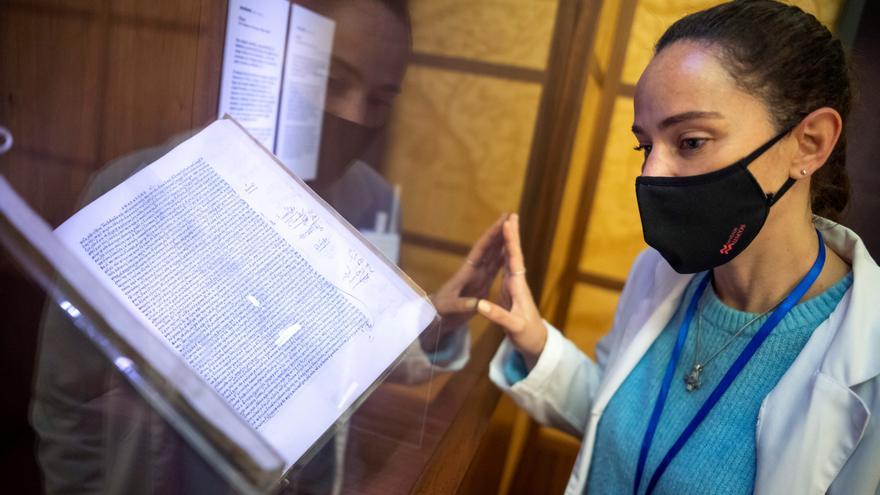 Toledo, Apr 28 (EFE) .- El Greco admired Tiziano, for his way of working with color, and Tintoretto, but Miguel Ángel did not like him as a painter although he did as an architect, a sphere that interested him a lot, according to the personal annotations that the Cretan painter left in the margins of the books in his personal library.

As a close to this month of April, which commemorates El Greco Day (he died on April 7, 1614 in Toledo) and Book Day, the Museo del Greco is disseminating through its social networks, in collaboration with the Library Nacional de España (BNE), two books that were part of El Greco’s personal library and are in the BNE: a 1556 edition of the oldest surviving architectural treatise, by Marco Vitrubio Polión (80-15 BC ), and a second edition of Vasari’s ‘Vite’, published in Florence in 1568

Specifically, there are some 14,000 words that El Greco wrote in the margins of the three volumes of ‘Vite’, the work of Giorgi Vasari (1511-1574), considered one of the first art historians, as Rocío Fernández explained to Efe- Tresguerres, an assistant technician at the Museo del Greco, who stressed that “this type of story serves to bring great figures closer to all audiences”.

It is still common to underline books and note in the margins as El Greco did in the books in his library, where he had between 130 and 148 volumes according to the inventory made by his son, Jorge Manuel, and it could be seen in the exhibition that the Museo del Prado made in 2014 on the occasion of the IV Centenary of El Greco.

Regarding Vasari’s book, which is a compendium of biographies of Italian artists in three volumes, Xavier de Salas and Fernando Marías have documented the story – in the book ‘El Greco and the art of his time the notes from El Greco to Vasari’ – and that is why we know that the first owner of the three volumes was Federico Zúccaro, who worked at El Escorial and gave it to El Greco on a visit he made to Toledo in 1568.

Something curious about these volumes by Vasari is that they have comments by hand from Zúccaro, del Greco and Luis Tristán, the disciple of El Greco to whom the work was passed, and they are written in 16th century Spanish and Italian, the technician explained. from the Museo del Greco who has pointed out that it provides “invaluable information about what El Greco thought of each of the artists.

In this way we know that he deeply admired Titian for his way of working with color (“the greatest imitator of nature with the beautiful way of coloring”, he wrote) and Tintoretto in ‘The Crucifixion’ (which he thought was “the best painting what is there in the world today “), but he did not like Michelangelo much as a painter but as an architect.

For a time, the trail of that book was lost, although it is known that it passed through the library of a convent in Madrid (perhaps the Trinidad Calzada) and that in the 20th century it left Spain; but in London he was found by the professor of Art History Xavier de Salas, who was director of the Prado Museum between 1970 and 1978 and who had previously organized and directed the Spanish Institute in London.

In a second-hand market, Xavier de Salas discovered the copy in 1966, although neither he nor the bookseller knew who the authors of the notes were, according to De Salas himself in a speech at the San Fernando Academy of Fine Arts.

The bookseller believed that the annotations undervalued the work and Xavier, on the other hand, believed that the comments revalued it, and he acquired it. He studied it and published it together with Fernando Marías in 1992 ‘El Greco and the art of his time, the notes from El Greco to Vasari’; and in 2014 a joint action was carried out between the BNE and the El Greco Foundation to acquire the three volumes from their heirs.

In this way, the book is in the BNE, has indicated Rocío Fernández-Tresguerres, who has added that it is “a unique, rare piece, a work of reference” and a basic source to know the thought that El Greco had of contemporary artists .

As for the book by Marco Vitrubio Polión that El Greco had, it was found in 1979 by Fernando Marías and Agustín Bustamante, who explained that the painter was writing down his personal impressions of art and architecture by hand, perhaps with the idea of ​​publishing a treatise on architecture .

Both Vasari’s and Vitruvius’s books are digitized and available for consultation at the BNE.

For its part, the Museo del Greco has another book from El Greco’s personal library that also contains a story: it belonged to the jurist and humanist Antonio de Covarrubias, a great friend of the painter and who had written comments in the book in Greek.

These are the complete works of the Greek author Xenophon (IV-V century BC), published in Florence in 1516, and that the Museo del Greco shows in its permanent exhibition.