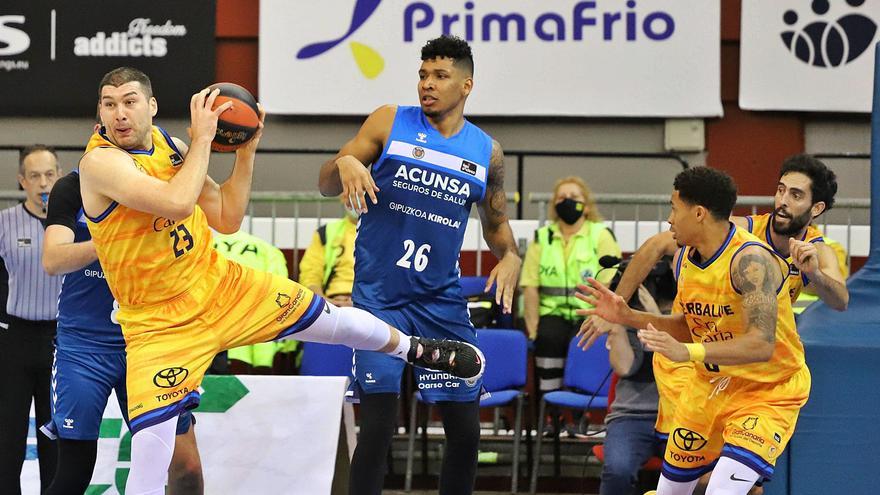 In a season like the one Herbalife Gran Canaria is experiencing, with a well-loaded backpack of defeats and in a position on the table in the Endesa League that has not been usual for him for decades, nothing comes out rolling. It can almost be understood that in that mud, Granca doubts everything. For this reason, perhaps yesterday he hesitated when things did not go well for him in San Sebastián, but unlike other occasions he took out breed and, above all, talent to solve the day, win against Acunsa GBC (65-79) and add his fourth victory in the Endesa League, fourth in a row if those of the domestic competition and those of Eurocup are spun.

Because Granca, which showed its best version of the year in an exuberant, very complete first quarter, faded in the next two periods to re-emerge in the last ten minutes, a place where it came tied. However, a 2-16 inning partial in the fourth quarter settled the day for Porfi Fisac's Herbalife.

Only then did he manage to completely disconnect an Acunsa GBC who was touched by pride. At that time, between AJ Slaughter –12 points, 4 rebounds, 8 assists and a PIR of 22– Beqa Burjanadze and Tomas Dimas struck down the San Sebastian side. But above names, once again, Granca began to resemble a team, capable of understanding its functions, of delegating the work to whom all, of all going to one.

The GBC came out aggressive from their first steps on the scoreboard with Lucas Faggiano running wild, seeing the basket with some ease (7-3, min. 2). The two teams knew what they were up to, they knew it was a momentous duel, that falling was not just going to mean losing one more game. Granca put one more gear on the matter and scratched a 9-0 partial with which he turned the scoreboard (7-12, min. 4), especially due to the courage of Tomas Dimsa, the game of Slaughter and the positioning of Oliver Stevic.

Granca remained the same to play the maximum distance so far (11-19, min. 6). The yellow ones were on the way. Not even Radoncic's boldness dwarfed Herbalife. A triple by Tomas Dimsa despaired Marcelo Nicola (13-22, min. 7). The joy that was so much boasted in season was seen.

The GBC launched in search of a reaction. He left a 5-0 run that was answered with the best weapon the yellow team had found at the San Sebastián Arena: triple. Stan Okoye and John Shurna - third of the day, third in the first quarter - anesthetized the GBC. The Nigerian forward made Tomàs fly to nail another one. Six triples out of eight attempts: 75%. Something never seen this season. El Granca, up to triple, went to the second quarter with its highest income (20-31).

Granca touched the exquisite before a stunned GBC. And that lost some of the halo that surrounded his launch of three in the opening quarter. The attack of the Fisac ​​team was stalled, with the luck that the GBC was not doing much better either. Two and a half minutes of a quarter and only one basket for each side.

That was good for the GBC, who cut the distance below ten points (25-33, min. 15). Perhaps what was seen then was more like a match between two teams that walk in the mud. From vitality to yawning. The set was very poor (5-4 in the quarter after 7 minutes). In those appeared Johnny Dee's hand. Also that of Dino Radoncic. Danger in sight because, in a couple of attacks, the GBC got within four points (31-35, min. 18).

Granca's break was critical and the GBC was already breathing down his neck (36-37, min 20). Herbalife needed a direct reaction, a point shot. Slaugther and Stevic ended the drought and Granca could breathe at halftime (36-42).

But Radoncic, Echenique, Span and Oroz turned the scoreboard violently: a red alert for Herbalife. The partial entry was 11-0 (47-42, min. 22). Fisac ​​came into Diop's arms to intimidate and it was he who tied the game (47-47, min. 24). All of that was fine, but Granca had lost its spark. He was going to have to roll up his sleeves to take the game forward.

And the game got really ugly. No trace of that total success that illuminated Granca in the second period. The duel was a pain. In the last ten minutes, everything was even. Fear came on stage at the San Sebastián Arena (53-53).

That looked like the least bugger was going to take it away. Or the one that was right, which for that matter was going to be the same. The Granca lit up for a serious start, with Slaughter back at the helm, to go for the fourth victory in the Endesa League.

Dimsa bombed, Burjanadze felt like yesteryear on his track and Slaughter killed Acunsa GBC (55-69, min. 35). The 2-16 run left victory one step away based on quality brushstrokes, the one that Granca has assumed since the summer. Talent appeared when the party needed it most

Granca got mixed up from there, with avoidable turnovers, but the income he had made in the first minutes of the quarter was worth it to enter the last two minutes with some tranquility (65-75, min. 38).

A peace that does not last for Granca. On Tuesday, Coosur Real Betis arrives at Siete Palmas, reinforced by Jerome Jordan and Jerome Randle, another of the teams that fights to get the head out of the well of the table. The fighting continues.