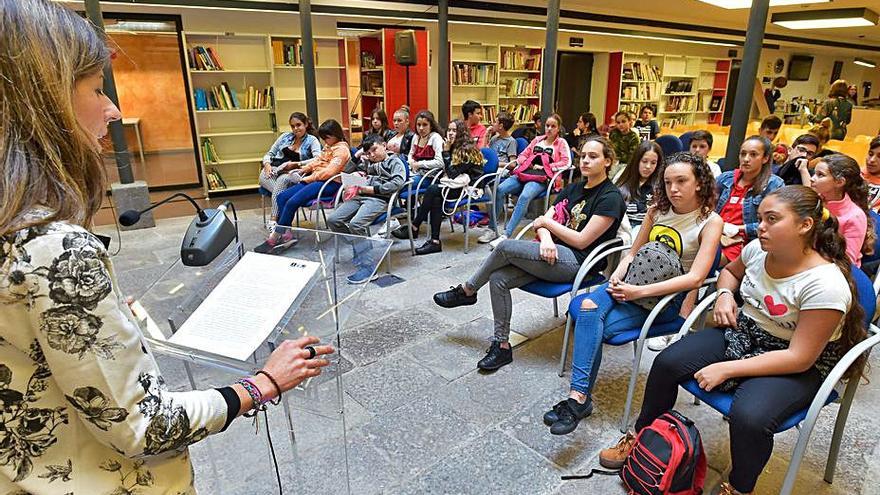 Talks, workshops, book presentations, cinema, short story contests, theater, shared and continuous readings, and an oral storytelling festival are some of the cultural proposals of the April-Book program promoted by the Council of Culture of the Cabildo de Gran Canaria for celebrate International Book Day -April 23- throughout the month.

The extensive cultural program includes more than thirty initiatives, both face-to-face and online, which will run until the end of the month in nine centers of the Ministry of Culture: the Pérez Galdós, Antonio Padrón and Tomás Morales Houses-Museums, as well as the Casa de Colón, the Insular Library, the Library, the Cueva Pintada Museum and Archaeological Park, the Nanino Díaz Cutillas Foundation and the Atlantic Center of Modern Art. Firstly, the Casa de Colón is hosting a new edition of the series Looks at the collection; a workshop for families led by writer Sandra Santa Cruz; the screening of the film Tres tristes tigres; the virtual visit El Diario de Colón and the short story contest Canarias, una poco América.

The Pérez Galdós House-Museum hosts the Writing workshop in Galdós 2021, taught by the writer Santiago Gil. It also offers the talk Why write about what you don’t want to talk about ?, which will be given by the writer Elizabeth Caballero; and Galdós in Kafka’s castle: The modern European bureaucracy and the feeling of the absurd in his work, by the writer Ramiro Rosón.

The Antonio Padrón de Gáldar House-Museum celebrates Book Day, on April 23, at 7:00 p.m., with the activity Geographies for stories without landscapes, which includes a continuous reading of one of the most celebrated collaborations between the painter Antonio Padrón and the writer Pedro Lezcano: Tales without geography and other narratives. For its part, the Tomás Morales House-Museum hosts the presentation of the edition of the Tomás Morales International Poetry Prize 2019 Painting number 100. Cesar Manrique in memoriam, by Samir Delgado, in addition to his lecture Tomás Morales and the Mexican poets. A comparative reading across the Atlantic; and the presentation of The paper is worth more. Chronicles of Luis Benítez Inglott with the pseudonym Pío Cid (1958-1965), by Santiago J. Henríquez. Then, the Museum and Archaeological Park of Gáldar hosts the visit-workshop Cueva Pintada as a family. Account that they count and Arminda and the attack of the corsair; and the bilingual Spanish-English visit Arajelbén / Till another day !.

The Canary Foundation Nanino Díaz Cutillas promotes the Spring and Poetry cycle, a sensitive marriage between poetry and music, with the presence of the philologist Casandra González, the poets Macarena Nieves and Acerina Cruz, the professors Itahisa Afonso and María Déniz or the writer Félix Hormiga , among others. It will also host a reading interwoven between the poets Macarena Nieves Cáceres and Acerina Cruz.

However, on April 23, the Insular Library joins, as is traditional, the Continuous Reading of Don Quixote that takes place at the Círculo de Bellas Artes in Madrid. The next day the scenic-artistic activity Alonso Quesada will take place, through words, with direction and dramaturgy by Luifer Rodríguez, interpretation by Mari Carmen Sánchez, Borja Texeira and Rodríguez himself, as well as by Dj Juan León and artist Rafael Moreno-Tapia. From April 26 to May 1, the Solopalabra Festival of stories for adults is also held in the library and the Guiniguada theater. In addition, the Insular Library delivers its Rana Awards on April 27 at an event at the Cuyás Theater, led by comedian Aarón Gómez.

The CAAM also develops a shared reading on April 23 that will feature the intervention of the professor of Hispanic American Literature of the ULPGC and written, Alicia Llarena. And the Cabildo de Gran Canaria Bookstore will apply a 10% discount on the price of all publications that day.

The make-up artist, costume designer and characterist from Gran Canaria Nauzet Afonso will give the first of the workshops planned this year in the framework of the Galdós International Laboratory, whose registration period remains open until April 30.

The aforementioned self-characterization workshop, which will take place in the morning at the Castillo de Mata between May 24 and 27, will allow both actors and actresses, as well as anyone linked to a theatrical or film team, to acquire essential notions of the makeup technique, special effects and characterization, handling all kinds of products, materials and tools. The price is 350 euros, with a limit of places for ten people. Registration is done on the Galdós Laboratory website.

The international meeting Women with noses returns for the fourth consecutive year to Las Palmas de Gran Canaria. From April 16 to 18, the José Antonio Ramos Auditorium in Doramas Park will give its space to humor and the circus, as well as to the recognition of a great figure of the trapeze, the Gran Canaria Pinito del Oro.

For three days, a total of nine shows will make visible the figure of women within the clown trade. Access will be free for each of the shows, although prior registration is required on the lpacultura.com website or on entrees.es from Friday, April 9.

The Cuyás Theater has put on sale new tickets for the play Una noche sin luna, written and starring Juan Diego Botto and which is scheduled this morning and Saturday at 7.30 pm at the Cabildo site. In addition, today, at 7:00 p.m., Botto will hold a meeting with the public in the framework of the so-called Cuyás Thursdays, an initiative of theatrical dissemination that returns to the agenda of this Gran Canaria venue after several months of stoppage due to the pandemic.

Thus, they will be able to acquire their seats for Friday and Saturday who in the last days had seen how the tickets for the respective functions were already sold out. In any case, the safety and hygiene measures against Covid-19 decreed by the health authorities for the current level of alarm will be respected, including those related to the capacity of the room, which will continue to be below the 55 percent allowed in level 3 in force in Gran Canaria.

Directed by Sergio Peris-Mencheta, Un a noche sin luna is a work based on texts by Federico García Lorca, “a moving and surprising piece” that, according to those responsible, aims to bring closer, from the sensibility of the 21st century and as if Federico himself was among us, little-known aspects of the life and work of Lorca, recovering fragments of interviews, talks, conferences, works and poems by the Granada-born author.