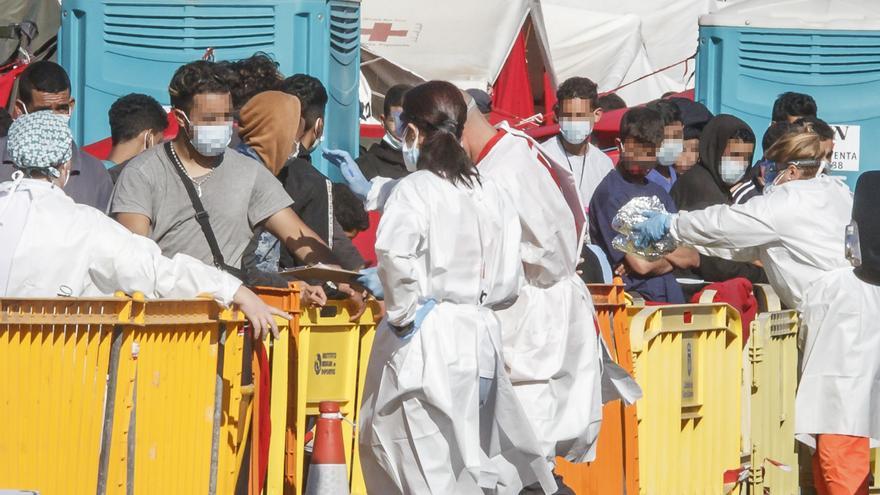 79% of Spaniards consider it a priority that migrants who arrive in the country and want to stay “integrate” and “contribute economically.” This is reflected in a study by Oxfam Intermon that, through a survey of perceptions, has developed the different profiles of citizens with respect to migrants and refugees.

The document, under the title ‘The other look’, has divided the Spanish society into four profiles and, the majority (46%) is what they have called ‘Ambivalent. Against ‘, which account for almost half of those surveyed.

Their main characteristics, the organization explains, is that they are empathetic and favorable to helping those who need it, but they manifest a series of very specific fears and concerns in relation to what they consider to be the migratory ‘avalanche’.

“They are aware of the factors that push people out of their homes” and that the rejection of host societies has to do with aporophobia, that is, “they are rejected because of their poverty.” But, at the same time, “they consider it a priority that migrants and refugees make an effort to integrate” in a way that “does not pose a threat to the identity of the host society,” explains the work.

They are also aware that in Spain it has not yet reached the level of reception of migrants and refugees than in other European countries and prefers that the aid be provided in the countries of origin. “This preference satisfies their solidarity inclinations, without forcing them to face or rationalize their fears,” says Oxfam.

Regarding their composition, 53% are men who generally enjoy a social and economic position somewhat above the average, being the group with the highest percentage of graduates, graduates and masters of the rest of the profiles. Geographically they are somewhat more concentrated in the north-central zone, and in general in large population centers. In addition, its ideological position is of the center or center left.

They are followed by the so-called ‘Ambivalentes Pro’ (25%), which are characterized by having a positive perception of migration, recognizing their effort to integrate and participate in society and admiring values ​​that they associate with migrants (religious and family). However, they do not share the supposed culturally negative effects or concerns expressed by other groups, such as machismo, or insecurity.

In this case, women predominate (54% of the group, mostly employed or businesswomen without dependent employees, so their economic situation is somewhat worse than the average. Geographically, they are somewhat more concentrated in the areas from the south and the Canary Islands, and their ideological position is center-left, and they are considered above-average non-practicing believers.

THE ‘AGAINST’, CONDITIONED BY THE NEGATIVE IMPACT

Their presence in society is very similar to the group that the study has called ‘Contra’ (22%), which are those with a clear position against immigration and the reception of refugees. According to the survey, they are “highly conditioned by the alleged negative impact of immigration on Spanish society” and consider it as “a latent threat.”

Thus, they deny the “right to emigrate” or “the need to render urgent aid” to refugees “in extreme danger”. On a personal level “they want to avoid contact with immigrants, even for their family and friends” and they are “less sensitive to the defenselessness of minors.”

This group is made up of 52% men, with a level above the average in terms of basic studies, they are mainly self-employed or entrepreneurs with employees under their charge. They are somewhat more present in the southern part of the country. They are the ones who declare themselves the most believers, the ones who least collaborate with NGOs and their ideology is of the center, except for 13% who consider themselves to be the extreme right.

Meanwhile, the least numerous group is classified as ‘Pro’ (7%) and they are those with a vision of the world very focused on the needs of people, where borders are an alien construct and interculturality an element that they consider very positive . They are active and particularly sensitive to refugees.

CONCERN ABOUT THE GROWTH OF RACISM

According to the study, they have a markedly feminine profile (72% are women) and are generally younger than the average (41% are between 18-34 years old). They are the ones that claim to have a worse economic situation at present, although they are mostly active workers (64%) and their ideological position is more to the left than the average and the group with the highest degree of agnostic or atheistic people.

These profiles, which divide Spanish society, have been made through questions made to more than 1,000 people between 18 and 70 years of age. Through questionnaires with open and closed answer questions, explains the organization, it has sought to find the perception that citizens have of this phenomenon in general.

Among the most entrenched opinions among Spaniards, in addition to the integration of migrants into society, are that they have the right to migrate (78%), that most of them have had no choice but to leave their home ( 75%), who are concerned about the growth of racism and xenophobia in Spain (73%) or that all needy people, regardless of their race or religion (70%) should be cared for.

Similarly, there is a majority consensus that minors are the most defenseless against migration (66%) or that migrants do the work that Spaniards do not want (65%). Furthermore, 63% would like their children to interact with people from different nations; 61% believe that it is necessary to help refugees and facilitate reception or asylum laws; and another 61% believe that migrants are more blamed for defects that Spaniards also have.

Furthermore, 57% think that Spaniards welcome foreign residents well. In this sense, the study asks those surveyed to evaluate their racism and that of society and, on average, Spaniards consider themselves not very racist: 2.5 points out of 10.

Their general self-perception is better with respect to society in general, since the average mark given by the respondents to the Spanish citizens is 5.9 out of 10. That is, “people tend to consider themselves less racist than the rest of the population. society, “says Oxfam.

From this study, the organization draws several conclusions, among which they stand out that respondents make differences between migrants and refugees; that there is “a growing polarization” in the debate on this issue, in which more extreme and even xenophobic ideas are being accepted; and the low degree of close relationship with migrants and refugees that is perceived in the sample.