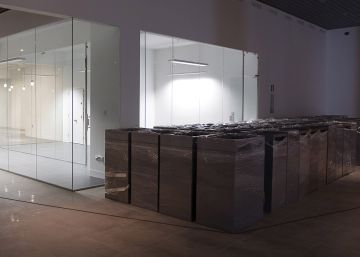 In its eagerness to turn Malaga into the city of museums, the City Council opted in 2006 to convert the building that housed the old Tabacalera into a great cultural center. He invested 20 million euros in remodeling the property and bet on private collections. One of them was intended to offer “the largest exhibition of precious stones so far exhibited worldwide”, as its website still indicates. On January 18, 2012, the Gems Museum opened its doors, but it did so with a few empty showcases, without permits or security measures. Local Police and Firefighters they closed the enclosure just two hours later. It was forever. The closure was the tip of a tug of war between the session and the company promoting the project, Royal Collections, which had already received 5.6 million euros from the municipal coffers as a fee. Now, the City Council must pay 1.8 million more after a ruling that recognizes that the company should also collect the amounts corresponding to 2011 and the first quarter of 2012. In total, counting interest, the figure is already around eight million euros .

“The project has given us enough headaches these years and it is not to be happy,” acknowledged the mayor, Francisco de la Torre, in 2017. He did so in the ninth session that closed a municipal investigation commission whose objective was to know the Why the failure? Of course, he clarified virtually nothing. Initially planned for its opening in 2008, difficulties in the adaptation works of the property – obtained by the municipality after an agreement with Altadis in 2002 – delayed the inauguration to 2010 and, later, to 2012. That January 18 was the deadline imposed by the municipality to start the exhibition project after the reception of the building 120 days before. Royal Collections – from which it is claimed that there were tapestries and gems in the rooms that day – opened precariously and free of charge. By then he had already requested the termination of the municipal contract because he understood that he was suffering losses due to delays.

The firm was accumulating more complaints over time. First against the decision – one day after the failed opening – of the Local Government Board of break the agreement (The City Council also demanded the refund of the amount because the museum activity had not started). Second, because I understood that the building remodeling work was not completed, hence they could not open the museum and there was no breach of contract. There were attempts to approach in up to a dozen meetings, but the positions never approached. In May 2012, the company returned the keys to the building and took the judicial route as the only way out.

The process has been long and cumbersome. The judge who has solved it, Asunción Vallecillo, holder of the court of contentious-administrative number 1 of Malaga, has highlighted in his sentence the accumulation of more than 20,000 pages and 52 volumes between administrative files and documentation provided by the parties in a case that has been extended eight years. The magistrate underlines the “bad relations between the parties” and declares the termination of the contract that united the City of Malaga and the Royal Collections. Of course, it highlights that the two “have contributed to the frustration” of the signed document because the causes of disagreement are not attributable to only one of them. It also responds negatively to the company’s request to receive 4.8 million euros more for the damages caused.

“We are studying whether to appeal the sentence,” de la Torre said when asked about the issue, at which time Miguel Ángel Cortés, former secretary of State for Culture in the government of the popular José María Aznar between 1996 and 2000 It was he who advised him to start a project endorsed then by the Ministry of Culture, which in that legislature directed Esperanza Aguirre and Mariano Rajoy, and made the arrangements for the councilor and Alcaraz to meet, charging 39,000 euros for it , as the municipal investigation commission uncovered. “I am not very grateful to that idea,” said the mayor of Malaga who, yes, believes that the failure of the Gems Museum was finally an opportunity: the Tabacalera building has been hosting a project of greater international relevance since 2015, the Russian Museum, as well as the Automobile and Fashion Museum since 2010, in addition to the Digital Content Pole – an accelerator of technological projects – since summer 2017.

Fulgencio Alcaraz, head of Royal Collections, has assured EL PAÍS that the company’s management will meet this Friday to analyze the sentence, but has declined to comment on it until the 15-day deadline that the Malaga City Council has to appeal it has expired. Daniel Pérez, leader of the PSOE in Malaga, has branded the operation as an “irresponsibility, nonsense and the biggest fiasco of the Popular Party government” and has requested “explanations” about what happened, valuing even requesting the celebration of an extraordinary municipal plenary session to “Debug responsibilities.”