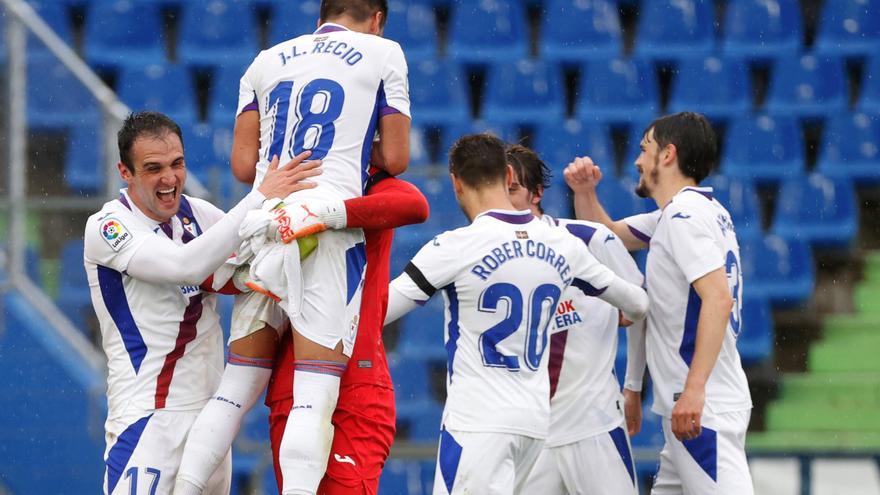 A hand of the Serbian Nemanja Maksimovic gave a penalty to Eibar, what won 0-1 on Getafe with a goal from Recio from eleven meters in the 89th minute with which the gunsmith team took a breath to keep their I dream of permanence.

The Getafe got into an incredible mess. He went for the tie, looked for a point that would have been good to mark distance with respect to the Second Division positions and ended up scalded. Eibar, who had six months without winning outside Ipurúa and was almost hopeless, achieved their second consecutive victory and, if Valladolid loses, they will be only two points away from salvation.

With a lot at stake on the pitch of the Alfonso Pérez Coliseum, both teams came out not to fail. The error was going to be seriously penalized in a crash in which few occasions without continuity in the game were foreseen. A piece of information at the end of the first half was overwhelming: when the 45th minute was up, the game had been interrupted 31st.

In all that time, there were only two occasions. One by Sergi Enrich who finished with the ball over the goal of David Soria after a shot from the boat early, and another by Jaime Mata, who finished fatally when he had space and time to have chosen other options.

In between, there was nothing else. Only interruptions and balls from one field to another that forced the midfielders to leave their necks watching the ball pass overhead. And, above all, there were many blows.

They were suffered by the Togolese Djené Dakonam, who had to leave the field of play after twisting his neck in a jump with Kike García, Sergi Enrich, who hit his head against that of Sofian Chakla and the Uruguayan Mauro Arambarri, who ended up on the ground after an elbow from Kike García himself.

The “artists” of Getafe, Carles Aleñá and Takefuso Kubo, were on the bench. Eibar’s Bryan Gil was a ghost on the pitch, overshadowed by so much pitch that he didn’t allow a flourish. The battlefield was made for workmen who didn’t want to misplace a single brick.

In the second half, only a physical slump from all the players could allow some football. With less physical force, gaps could appear and names could stick out with more finesse to handle the ball. But, at the exit of the changing rooms, a storm of wind and rain appeared to receive the 22 players. The weather did not help anything in the showiness of the game.

Still, little by little, with much effort, Opportunities began to arrive. The first, with two heads. One from Sergi Enrich who stopped Soria and another from Turkish Enes Ünal who went outside Dmitrovic’s goal. The third warning was given by David Timor with an attempt from his field that was about to surprise the Eibar goalkeeper.

The fourth, the Uruguayan Mathias Olivera, who found a ball almost on the line of the goal defended by Dmitrovic that failed to finish when he had everything in favor. There was no hit anywhere. They all lived up to a terrible statistic: Eibar and Getafe, with 26 goals in favor, have scored the least this season.

Until the key action came. Maksimovic, on the edge of the end, touched the ball with his hand inside the area. Recio did not fail and the Eibar went from despair to hope in just an instant. Mendilibar and his players keep their dream of the First Division. Getafe, he speculated, played with fire, and got into trouble.

Incidents: match corresponding to the thirty-fifth day of LaLiga Santander played without an audience at the Alfonso Pérez Coliseum.