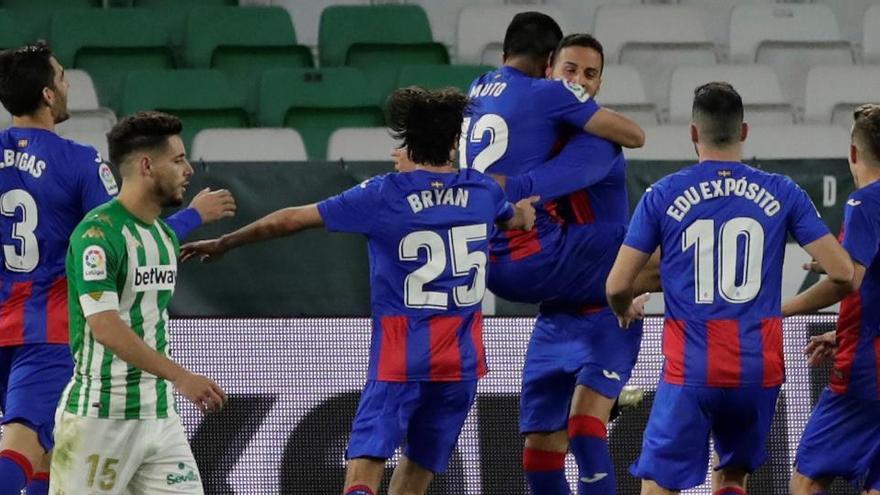 The Eibar confirmed his magnificent statistics as a visitor at Benito Villamarín and achieved three points with which he leaves the bottom of the table, after clearly win 0-2 at Betis Chilean coach Manuel Pellegrini, who goes into depression after adding three consecutive defeats and being closer to the relegation places.

The Basque team was much superior during most of the game and he even fell short in the result, because he even missed a penalty in the final stretch of the clash against an imprecise opponent in defense and without clarity in attack.

On the eleventh day, with the first third of the tournament still unfulfilled, the Verdibanco team needed a triumph with which to clear up the doubts generated in their two previous matches, in which the Camp Nou (5-2) and San Mamés ( 4-0).

The Eibar team also had a great opportunity to take a good leap in the standings and breathe in that struggle to be away from the relegation places, to the point that with the victory they surpassed Betis in the table, as it was.

Those of José Luis Mendilibar arrived with much more favorable numbers as visitors than as locals, although with the fact of being the LaLiga team with the fewest goals in their favor, only six in ten games, but they also faced the team that has conceded the most (21) in the same games.

Betis coach, Chilean Manuel Pellegrini, made his debut this season as a starter to Mexican midfielder Andrés Guardado to give more strength to that area of ​​the field, while Eibar put the Japanese Yoshinori Muto and ex-Betis Takashi Inui as more advanced in the absence of their top scorer, Kike García, who was suspended, and Quique González, injured.

The game was very controlled between both contenders, wanting to become strong in the center of the field and with the intention of not giving concessions in the defense, although after twenty minutes a first mistake came in the rear, that of the visiting central Pedro Bigas, who left Cristian Tello alone before goalkeeper Marko Dmitrotvic and the Serbian with one foot guessed the intention of the winger.

The key play of the first half came in the 34th minute, when one of Eibar’s most active players, the footballer on loan from Sevilla Bryan Gil, finished off with a header and beat Joel Robles, but when the ball entered meekly Inui riveted it to the goal background and The referee, after consultation with the VAR, considered that the Japanese came from an offside previous and canceled it.

Big shock for Joel Robles, who replaced the injured Chilean goalkeeper Claudio Bravo, and for the entire Sevillian team, who retired to the locker room at halftime with the feeling that his rival had finished the first half of the match better.

In the resumption, the gunsmith team came out again with better ideas and Muto was very ready at the exit of a corner to get between the sleeping Betic defense and sign the 0-1 four minutes into the second period.

The Japanese achieved his first goal in the Spanish league and five minutes later Joel Robles made an unnecessary penalty on Rober Correa that the Spanish-Argentine Esteban Burgos did not waste to start making things difficult for your rival.

Pellegrini gave entry to the forward Loren Morón and the Portuguese midfielder William Carvalho to redirect the disoriented course of his team and shortly after to another forward, Borja Iglesias, and the Mexican Diego Lainez, also a player from the creation zone, but Eibar was close to 0-3.

Bryan Gil and Estaban Burgos were able to get it, but the Madrid goalkeeper redeemed himself from his mistake on the penalty and was very attentive to prevent it, and more so when in the 86th minute another innocent Marc Bartra penalty on Inui stopped him so that the 0-3 that Eibar deserved not to go up to the scoreboard.

Incidents: LaLiga Santander match of the eleventh day played at the Benito Villamarín stadium without an audience. Before the meeting, a minute’s silence was observed in memory of Diego Maradona.