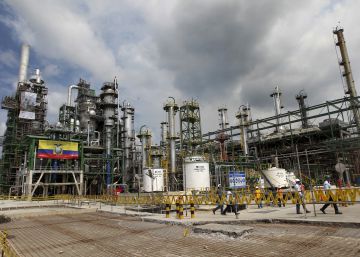 Ecuador is already out of OPEC. The Government of the Andean country announced last October its intention to leave the cartel of oil exporters, a decision that came into force today, at the beginning of the new year. This movement reveals the first fractures within the club led by Saudi Arabia around the strategy that must be followed to maintain a price level that satisfies producers.

Since the end of the Government of Rafael Correa, Ecuador’s economic policy is conditioned by several ingredients: the country is over-indebted, public revenues are not enough to cover expenses – which generates more debt – and one of its main sources of resources, oil, is practically 100 % in the short term. In this context, and in view of the need to obtain more money each year, the Government of Lenin Moreno has decided to jump from the Organization of Petroleum Exporting Countries (OPEC) to avoid being subjected to the reduction quotas in crude oil production. The objective of the Ecuadorian authorities is to increase extractive capacity, but analysts show their doubts about their ability to reach that goal.

Ecuador extracted, on average, 537,000 barrels of oil per day in 2019. However, OPEC had set a maximum quota of 508,000 barrels. It did not fulfill the commitment, but, as explained by the Ecuadorian authorities, this was understood within OPEC as a necessary excess given the economic difficulties that the Andean nation was going through. The Energy Minister, José Agusto Briones, announced in mid-December that in 2020, 21,000 more barrels per day will be pumped although his predecessor in office, Carlos Pérez, gave a more ambitious figure in November: about 600,000. However, the reality is still far from the 700,000 barrels per day that Moreno promised by assuming the presidency in a distant 2017.

By being released from OPEC restrictions, Ecuador will intensify its strategy of raising the volume of extracted oil that, after taxes, is the second most important source of revenue for public coffers. But for René Ortiz, former secretary general of the cartel, the decision to leave the block of oil countries does not fit the official explanation. “There is no need, because the fees set by OPEC are not mandatory in the sense that they do not carry a penalty,” he clarifies. Ortiz adds that the amount of additional barrels that Ecuador can throw into the market is so small – in relation to other partners – that it does not influence international prices. Ecuador was the smallest member of the organization. And this is the second time he retires from the block: he joined in 1973, left in 1992 and returned, already with Correa as president, in 2007.

A necessity in times of economic tightness

Ecuador needs to produce more oil. The country has budgeted for the next fiscal year a fiscal gap between income and expenses of over 3% of GDP and a financing need of 6,700 million dollars (5,980 million euros). The more than 100,000 million dollars generated by the country each year are nourished, in part, by revenues from oil exports that between January and October generated 7.335 million dollars. The problem now is the narrow margin of exploitation of crude oil in the short term given the commitments already acquired.

During the Correa Government decade, the signed oil pre-sale contracts left a minimum margin for oil-free sales. By 2020 the number of barrels available, according to official data, is non-existent: 100% of the oil is compromised. The correísta Executive agreed with China and Thailand long-term shipments of crude oil in exchange for financing. There is still an outstanding balance of $ 3.1 billion with a five-year padlock for shipments. That is, even if the loans are returned, the country cannot stop shipping the oil signed with Petrochina and Unipec, which adds 340 million barrels in the next five years.

In Moreno’s management, part of these contracts have been renegotiated, managing to release 50 million barrels, which has allowed 10 sales operations to be carried out for a combined value of $ 1.4 billion, according to calculations by the Minister of Energy. “If we had greater availability of oil, we could generate more international tenders or contests” that allow negotiating a better price per barrel, the International Trade Manager of the public oil company explained in a televised interview Petroecuador, Mauricio Samaniego. That scenario should wait at least for the settlement of the first contracts at the end of 2020.

The alternative to increase oil pumping is to look for new sources. In the government plans advanced by Minister Briones is the search for strategic partners: private investors exploring and extracting crude oil in areas of the Amazonia Ecuadorian still untapped. Of the 537,000 barrels per day, 427,000 are produced by Petroecuador and 110,000 by private operators. This balance will change if the Government’s plans to tender the fields of the Suroriente and the Ishpingo field, together with the Yasuni National Park.