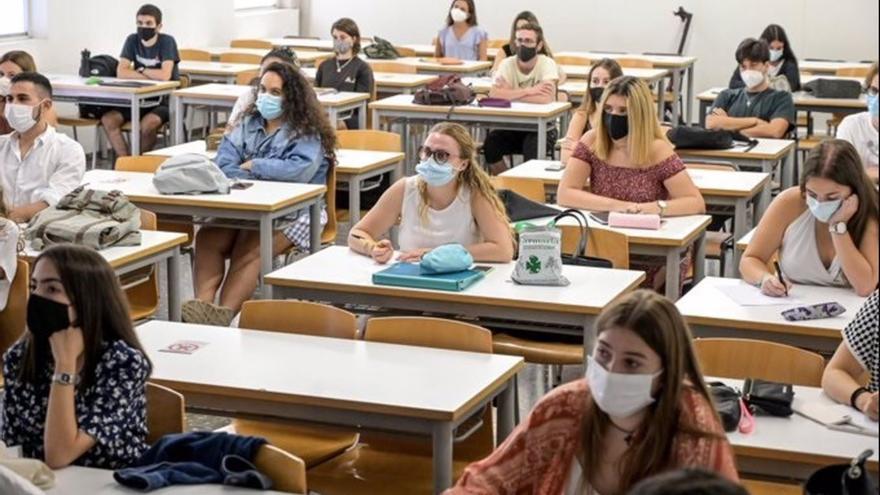 At the end of last and atypical month of September, the British Government underpinned the normality to dry -without the minimum pretense or dissimulation of novelty- by instructing schools to dispense with anti-capitalist teaching materials, equating this political and academic position with anti-democratic, racist or anti-Semitic positions, as well as with criminal activities. With these recommendations, the Ministry of Education went from secretly greasing the inertia of what we have been and doing in the coordinates of the dominant economy to aggressively forcing a capitalist machine without a possible fix, expelling and criminalizing, in a totalitarian way, critical alternatives of social justice in those who welcome and gather all people – to “99%” for which Cinzia Arruzza, Tithi Bhattacharya and Nancy Fraser demand an anti-capitalist, anti-racist and environmental feminist project, including that “one percent” to which Isabel Díaz Ayuso it insists on depriving of dignity. By violently and unapologetically intervening (in) education, one of the key cultural dimensions for the naturalization of capitalism as a condition and way of life, the UK Government vehemently makes explicit what other institutions practice more prudently or, perhaps, ways more suggestive: the normalization (militant, irresponsible or inertial) of the dominant schemes to understand and inhabit this world, until they make them as invisible and innocent –so fallaciously de-ideologized– as necessary and sticky.

Wanting to participate in the shared work of making transparent and amending this sedimentation of the single and dominant thought in education, researchers from the GEP & DO Observatory and the EcoEcoFem research group, In collaboration with Pandora Mirabilia, We elaborate the research-diagnosis on the situation of the teaching of economics in the Spanish public university system, supported and financed by Economists Without Borders. The study, which will be presented this November 20 at the VII Conference Another economy is on the march, organized by Economists without Borders and the UNED, part of the identification of a specific and basic problem that affects, we believe, not only the fair conceptualization of economies and their practices, but also the quality of public education itself and , therefore, to its contribution to critical citizen (in) formation and democratic health. In this sense, university teaching of economics suffers, in general terms, from a lack of analytical commitment and a critical spirit to question the assumptions and methodology of neoclassical theories and models – and, by extension, to train students for such questioning -, as well as little pluralism in their approaches, insufficient interest in historical analysis and the integration of present problems, disconnection with the “real economy“and the diversity of vulnerability and a worrying invisibility of ethical, ecological and gender perspectives.

In light of this diverse problem –although coherent as a whole–, the research wanted to consider, on the one hand, as an X-ray of university education in economics, observing if more diverse and heterodox approaches have managed to intervene (the) or if recent or present events as significant as the Great Recession are incorporated into their agendas; and, on the other hand, as a proactive effort towards the integration and mainstreaming of the various critical views of the economy in order to transform teaching, and also the economic model itself, from a feminist, ecological and human rights perspective, with special emphasis on attention to the local sphere and its relationship with the global. In relation to the first of these objectives, the analysis of the study plans and the teaching guides and initiatives of fifteen state public universities confirms that the integration of a critical, plural or heterodox perspective in the teaching of economics is still a minority and, in In any case, limited to certain aspects or themes in the syllabi, or concentrated in the elective subjects, which are discovered as the most favorable or accessible teaching space for the incorporation of alternative perspectives – although also as the marginalized subjects of knowledge essential and subjected to the pressure of market demands that condition, on many occasions, student choices.

Despite the fact that the vast majority of the teaching guides analyzed include the development of the “critical spirit” and the “capacity for critical analysis” of the students as an objective or specific competence, the presentation of their syllabi and contents give a good account of the limited integration of perspectives Critical-heterodox alternative proposals or theories that put into discussion the classical or dominant economic principles. Something very similar occurs with the perspective of gender, inequality and discrimination (gender, race, income), the environment and ethical commitment: although some guides mention in their objectives or competencies that students will study these dimensions and learn about the causes and consequences of its problems, the development of the syllabus and the contents of the subjects does not specifically or broadly address these issues – even less from a perspective that we should automatically understand as critical. In fact, the most cited reference authors in the bibliographies of the subjects analyzed not only show a very clear and alarming gender bias; furthermore, following the report of Post-Crash Barcelona on teaching economics in Spanish universities (2014-2015)Most of these authors are eminently framed by the precepts of the neoclassical school. And one last piece of data, no less worrying or revealing: barely fifteen percent of the teaching guides analyzed in the post-crisis period (from the 2009-2010 academic year) have incorporated the study of the Great Recession into their agenda, after more a decade since its outbreak.

The opinions and feelings of the economics faculty and students participating in the study, as well as the interviewed university cooperation agents, support the results of this first analysis. Through in-depth personal interviews and online questionnaires, we were able to learn, among other perceptions, that the vast majority of the teachers, students and agents participating in the study recognize the existence of a single or dominant paradigm in university teaching of the economy, which corresponds to the neoclassical and capitalist vision. Specifically, more than half of the teachers interviewed do not believe that the study plans for degrees in economics and related subjects have incorporated alternative or heterodox perspectives with respect to this dominant neoclassical vision in recent decades. In fact, the professors interviewed acknowledge reluctance and difficulties to introduce a pluralistic approach in university teaching of economics; Among others, they point to obstacles related to the competence of the faculties, the lack of interest of the untrained teaching staff, the lack of technical material or the difficulty of incorporating alternative perspectives in core subjects. Faced with neoclassical uniformity and the system’s resistance to accepting heterodox views on equal terms with respect to the dominant approach, both teachers and students agree almost unanimously in highlighting the need to train and be trained, respectively, to critically question economic theories and models presented in class.

In short, and recapitulating, this diagnosis of the teaching of economics in the Spanish public university draws, as might be expected, a worrying landscape for those of us who believe and claim – especially, for those of us who dedicate ourselves to university teaching so much inside as outside of the (sometimes too strict) economic borders – that knowledge and also the economy must be rigorous in the recognition of diversity and in its commitment to look better at the world to elaborate “better versions” of it and “live well” in him, taking Donna Haraway’s words. Hope, without a doubt, is kept alive by the opinions of teachers and students such as the participants in our study, who, without fully or necessarily sharing an anti-capitalist position, understand the urgency of critically refining and broadening the views of what we consider to be economics (with and without a capital letter) and the social role of the discipline itself; It is also responsible and rigorous to recognize, in the face of hegemonic discourses and institutions, our agency, our margin of freedom and our power to take advantage of the cracks of the dominant thought and cross it with transformative knowledge.

This critical transformation of university teaching of economics does not happen, we believe, by censoring or extirpating the neoclassical vision, but by demystifying and overthrowing it from its naturalized status of total and aseptic theory, giving visibility and scientific recognition to the wealth of critical currents, as well as evidencing their homage to dominant interests that reproduce living conditions (and explanations for these conditions) that are eminently unfair for ninety-nine percent of the people and the planet – as I said Carlos Lázaro in his article last June, “the world” is not as it is by chance “-. Therefore, whether the reactions such as that of the British Government are the swan song of institutionalized neoliberal capitalism or its restorative strategy, initiatives such as the research that we present aspire to participate. in its measure and scope, in the composition of a new normal of social justice that we don’t want others to build“–Other privileged interests, other perverse mantras–. Because we believe that the economy, the university and the academy, like any other dimension of our lives, can and should be spaces to imagine, create and embody lives that deserve the joy of being lived.

Economistas sin Fronteras does not necessarily identify itself with the author’s opinion and it does not commit any of the organizations with which it collaborates..