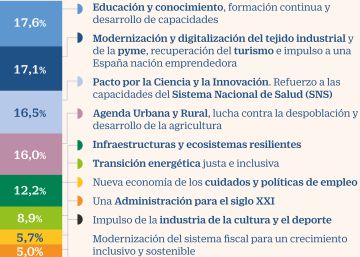 The Government is finishing forging the key with which it aspires to access the European aid approved in the face of the Covid-19 pandemic. It is the National Investment and Reform Plan, whose drafting is being led by the Ministry of Economy, where they aspire to send it to Brussels at the end of this month or the beginning of the next to speed up the transformation projects of the country. In addition to a wide assortment of investment projects, with a focus on the ecological transition and digitization of the economy, the package includes a series of far-reaching reforms in the tax, labor and pension fields to obtain the approval of the European partners. Its content will be advanced tomorrow to the social agents.

The document should serve Spain to obtain 72,000 million euros in grants in three years, starting with 34,000 in 2021 (26,634 million from the Next Generation fund already integrated in this year’s Budget and 8,000 more, from the ReactEU fund, which will be injected directly autonomies to strengthen their health and educational systems). Although the country has the margin to send it to the European Commission until April 30, the Executive is determined to deliver it as soon as possible to speed up the implementation of the projects. Despite the fact that the community examination, and therefore the disbursement, will still take months, the Government has already budgeted the funds to advance them via debt and intends to initiate investments once they are communicated to the EU. After all, bidding and analysis procedures will have to be put in place first, which will take time. In any case, the shipment is pending the latest clarifications from Brussels on the format, official sources reveal.

The strategy will be anticipated tomorrow to the bosses’ and union leaders by the Vice President of Economic Affairs, Nadia Calviño, who has summoned them to a meeting together with the Minister of Finance, María Jesús Montero, and seven other ministers.

The degree of detail of the text that the EU will receive, however, is yet to be defined and, in some cases, the Government will limit itself to proposing master lines of action so as not to get their fingers caught until discussing the fine print within the social dialogue or the Parlament. This is the case of the tax reform, in which the need to adapt the tax system to the 21st century will be defended, increasing its progressiveness and redistributivity, and measures that have already been approved, such as Google and Tobin taxes, or those in the making, such as the antifraud tax law, although it will wait to form a committee of experts to design it to announce news.

The document will shed a bit more clarity on two other key reforms: the one aimed at “modernizing” the labor market – as Labor calls it – and that of the public pension system. The first will fundamentally include the redesign of active employment policies (training for the employability of the employed and unemployed) and of intermediation in the labor market; as well as a new youth guarantee program to lower the high rate of unemployment of the group, and measures to tackle the duality of the labor market that is produced by the polarization between permanent workers with better conditions and the abuse of temporary employment, in the other extreme.

The batch of measures to tackle the excess of storms is presented as the most controversial in the face of social dialogue. Sources of the negotiation consulted pointed out yesterday that “the Government could be thinking about a hiring reform, but it does not seem that they have defined how to do it either.”

It will also propose to use ERTEs as a structural tool for flexibility and to reinforce training.

In the case of pensions, the strategy advanced to the social agents involves a strong tightening of early and partial retirement, the promotion of the maintenance of employment beyond the retirement age (delayed retirement) and the prohibition of the clauses of forced retirement upon reaching the legal age that can now be included in the agreements. In addition, it includes a new formula for the revaluation of pensions, which does not convince the unions, which sets the guarantee of maintenance of purchasing power for a longer period than the current year.

But the most controversial proposal of the pension reform being considered by the Government is the extension from 25 to 35 years of the calculation period for calculating the retirement benefit. This measure has not been included in the proposal presented to the social dialogue and, for the moment, has the frontal rejection of unions and United We Can, which assure that it would result in a cut in the new pensions. Yesterday, the Minister of Labor, Yolanda Díaz, assured that United We “will not accompany” this measure, so it could be the case that the Government includes it in the proposal to Brussels but cannot carry it out in the Spanish Parliament.

Although the pension reform would imply a containment of costs and the fiscal one an increase in income, the document will not include, as such, a plan to consolidate the public accounts as claimed by the Independent Authority for Fiscal Responsibility (Airef). The strategy to reduce debt and deficit in the medium term will not be pointed out until the delivery of the Budget Stability Program, which will take place on April 30.

The autonomous and private role

The reform program is framed within the Recovery, transformation and resilience plan for the Spanish economy, which includes the investments to be started (see graph). In this field, public-private collaboration will be key, said the Secretary General for Economic Affairs of La Moncloa, and manager of the plan, Manuel de la Rocha Vázquez, in an act of Fundación Alternativas, in which he detailed which State and companies will be co-investors who will distribute the profits for reinvestment, in the case of the public entity.

In turn, De la Rocha urged the regions to be responsible with the management of European funds since the delay in the execution by a single community can put at risk the following community disbursements, which will be linked to objectives. To avoid a burden of this type, La Moncloa will establish controls over regional actions.