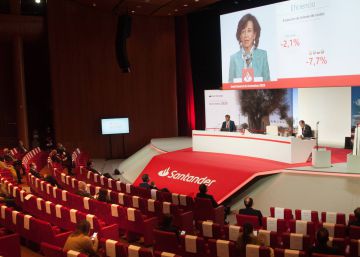 Listed companies want to have the legislative tool now so that their shareholders stay home when they hold their shareholders’ meetings. The Ministry of Economic Affairs and the Ministry of Justice negotiate with Spanish Issuers, an association that represents 75% of the Ibex companies, an express standard so that they can be carried out 100% virtually immediately. The goal is for it to be ready in the next few weeks.

It is not a trivial matter. The law requires that companies meet their shareholders in a meeting in the first six months of their exercise. From the first state of alarm in March, the Government moved to facilitate it and enabled this possibility, with the mission that these gigantic and mandatory meetings were not a source of contagion of the Covid.

Throughout last year this type of summit was allowed to take place without the need to go anywhere: it was enough that “all the people who had the right to attend or those who represent them have the necessary means, the secretary of the body recognizes their identity, as stated in the minutes ”.

But the last regulation, last November, left several issues pending to be resolved. It mentions “assistance” by telematic means, but not “celebration.” This is a problem, due to the organizational and economic implications of holding the meetings. “A possible limitation or restriction of shareholders’ rights can be problematic and lead to challenges to the call itself,” they point out from Spanish Issuers in a letter sent to their partners.

Javier Zapata, general secretary of the association, explains that they are in contact with the Treasury and the CNMV to resolve this uncertainty urgently. Sources from the Ministry of Economic Affairs confirm that they are working together with Justice to offer a solution.

The current Capital Companies Law, already in the Cortes for its reform, includes the formula of dual meetings (face-to-face, but with virtual participation), but not exclusively telematic. The changes foreseen in the modifications include that power, as published by CincoDías on February 8, thanks to an amendment of the PSOE suggested by Spanish Emisores. But the high season for meetings is starting now, and the reform will not arrive in time.

Furthermore, according to the current wording of the proposed modification, the 100% virtual boards would need the approval of owners of at least two-thirds of the capital. The paradox would arise that to give the green light to this new option, they would have to convene a classic meeting. It would create a vicious cycle.

Most of the shareholders’ meetings of the Ibex companies were held during the year outside the usual period, from March to May, according to the proxy solicitor Georgeson. The Government postponed the obligation of shareholders to meet in the first six months to 10 months; that is, until October in most cases.

The Capital Companies Law is in the parliamentary process for its modification, but consulted legal sources indicate that its approval is not expected until the middle of the year. This rule will include, in addition to the possibility of holding meetings 100% online forever, the regulation of so-called loyalty actions, with double the political rights for partners who have been in the capital for more than two years. The last text also includes an amendment by the PSOE that tightens the conditions for exclusion from trading through a takeover bid. Now with a report from an expert you can take a company off the Stock Market. The objective is that the buyer controls at least 75% of the capital after the offer so that he can execute the exclusion.