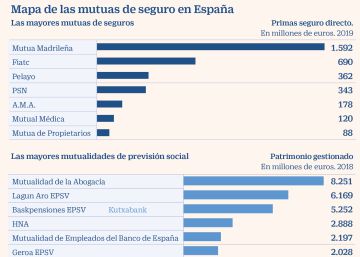 The General Directorate of Insurance and Pension Funds (DGSFP), under the Ministry of Economic Affairs headed by Nadia Calviño, is contacting the mutual insurance companies to ask them to consider their merger with other entities of the same nature. Supervisory and regulatory demands, coupled with the challenge of the coronavirus crisis, have encouraged this decision.

The Spanish insurance supervisor continues to monitor the evolution of 30 mutuals and 47 social welfare mutuals. In addition, the autonomous communities have powers over 176 regional mutuals. In total, there are 253 mutual insurers.

This group is very heterogeneous. There are giants such as Mutua Madrileña, which in 2019 received 1,592 million euros in premiums, or the Mutualidad de la Abogacía, which manages a volume of assets worth 8,251 million euros. But there are also trade union mutuals that are small in size and require the supervision of an official body.

The DGSFP, for example, has powers over the Mutua Segorbina de Seguros or the Mutua de Seguros de la Panadería de Valencia. Even if the solvency data of the vast majority of entities are very solidEven after being affected by the pandemic and the economic crisis, the supervisor wants there to be concentration to make groups more solvent and facilitate their monitoring task.

“The DGS has been trying for many years to concentrate the sector. With Covid-19 and Solvency II, some entities may be fairer. In the end, it makes sense that there are mergers, although there are usually many personalities and it is not always easy to carry out the operations, ”explains Javier Vergés, CEO of Musaat.

Within the mutual world there are three very different categories. There are mutual benefit societies, which help save for retirement and, sometimes, allow paid contributions to equal Social Security contributions. On the other hand, there are life insurance mutuals, and general insurance mutuals. (cars, home, fires, accidents).

In the first group is where there are a greater number of entities. To a large extent, because in the Basque Country there are no pension plans, but rather all private savings for retirement are channeled through voluntary social welfare entities (EPSV), which have a mutual nature and are supervised by the Basque Government. In total, 22,000 million euros have been saved in EPSV.

In other social welfare mutuals, such as that of the legal profession, that of pilots (Loreto), that of the police, that of footballers, that of the clergy or that of the Bank of Spain employees, there are another 25,000 million euros . Renault employees also have their insurance company.

“The problem is that many times, due to their union origins and their small size, they are unprofessionalized organizations that have a difficult time meeting all regulatory requirements,” explains Gustavo Caballero, head of capital markets at Rentamarkets. In the last 10 years there have been small mergers in the sector, which have made more than 70 mutuals and mutuals disappear. The last, the integration of the National Brotherhood of Architecture with the mutuality of the surveyors (Premaat). But the supervisor wants the process to speed up.