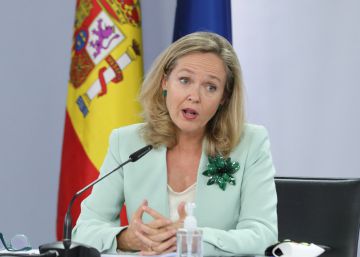 The magnitude of the jump to positive that the Spanish economy made in spring after the restrictions of the third wave of Covid have been a mirage. The National Institute of Statistics (INE) yesterday made an unprecedented cut in its estimate of GDP advance in the second quarter of the year (which drops from 2.8% to 1.1% in the quarterly rate and from 19.8% to 17 , 5% in the annual) that threatens to lower the growth prospects for the year as a whole to below 6%.

The INE attributes this reduction on its estimates of July 30 to the fact that at that time it barely had data until May, drastically moderate when incorporating those of June and the sales figures of large companies and SMEs that the Tax Agency compiles in VAT returns. This, together with the review of the annual evolution, the incorporation of new employment and balance of payments data, has revealed that the tone of the recovery has been lower than estimated in terms of household consumption, investment and activities services, hospitality and some branches of the manufacturing industry.

The biggest downward revision ever signed by the INE, which underlines the difficulty for the statistical calculation that the ups and downs of the pandemic entail, has caught economists by surprise in the midst of a streak of upward revision of forecasts. On Tuesday, the OECD raised its estimate of Spanish GDP growth for 2021 by 0.9 points, from 5.9% to 6.8%. In turn, the Bank of Spain improved its expectation for the year by one tenth, to 6.3%. An improvement that the supervisor attributed to the “surprising” good data given by the INE for the second quarter, in which the supervisor expected an advance of 2.2% when estimating a rise in household consumption of 2.9%. had initially risen to 6.6%. It has finally been lowered to 4.7%. The entire projection, which includes an advance of 2.7% in the third quarter, is now in question.

In parallel to the publication of these forecasts, and just 48 hours before the jug of cold water thrown yesterday by the INE on the growth projections, the Government rushed to approve on Tuesday the new macroeconomic framework that will support its project of General Budgets of the Status for 2022. The First Vice President of the Government and Minister of Economic Affairs, Nadia Calviño, maintained her estimate that GDP will grow 6.5% this year and 7% next year, although she assured that the pre-crisis rhythm of daily activity it will recover already at the end of this year.

Despite yesterday’s strong correction, Calviño refused to modify his projections, claiming that he did not do so when the data was better, and trusting in which year it will go from less to more. His Ministry assumes that “during the third quarter this recovery is going to accelerate.”

The economists and main analysis houses, however, finalize reductions in their growth forecasts to reposition the advance of GDP in 2021 below 6%.

“Even a stronger recovery in the third quarter forces us to cut our forecast for the whole of the year. The economy would have to grow by around 8% in the last two quarters to maintain the 6.3% growth forecast for the year as a whole ”, illustrates Raymond Torres, Funcas’ business director, who assumes that the figure will remain unchanged. below 6%. In his opinion, a large part of the correction is due to the effect of inflation, since the extra cost of electricity would have reduced the consumption capacity of families and increased the costs of companies. Torres assumes that, to a large extent, the recovery is only delayed, but clarifies that growth seems to be less vigorous than expected.

“The revision of the INE is a substantial reduction. It means that in the year we will grow by 5% instead of 6%, or 5.5% instead of 6.5% “, according to the projection managed, estimates for his part José Emilio Boscá, professor of Fundamentals of Economic Analysis at the University of Valencia and associate researcher at Fedea. What worries him most, however, is that the review shows “a loss of productivity around a point, something that does change the photograph.” It is, he explains, a step backwards that complicates the outlook in the face of the rise in the minimum wage that the Government has just promoted or the tax reform that it is considering.

Specifically, productivity goes from growing by 0.7% to falling by 1.1% annually (the advance in hours worked remains at 4%) and investment, which grew by 2.2% at the beginning of the year, falls 3.3%.

Both Torres and Boscá emphasize, however, that the registered growth is considerable. In fact, the annual increase in GDP in spring is still the highest on record, although it should be clarified that it is compared with the Great Confinement period.