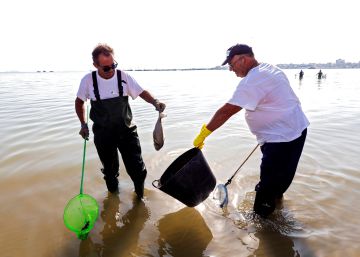 Ecological organizations, which have been denouncing the pollution to which the Mar Menor has been subjected, they have raised their voices this Monday again, this time against the popularly known as the "zero discharge plan", because they consider that the measures proposed to stop the arrival of pollutants in the largest salt lagoon in Europe will not only be effective, but they will end up transferring pollution to the Mediterranean sea, where at least 2,125 tons of nitrates will be poured per year.

He Ministry for Ecological Transition approved on September 26 the Environmental Impact Statement (DIA) of this zero discharge project (officially, “analysis of solutions for the objective of zero discharge to the Mar Menor from the Cartagena Field”), which is a set of 21 actions to end the spills that from the Cartagena field have filled the salt lagoon with polluting substances and that will involve an investment of more than 600 million euros.

Julia Martínez, coordinator of the area of ​​Aguas de Ecologistas en Acción Región de Murcia has recognized at the press conference the positive part of the project: she makes a “correct” diagnosis of the situation and confirms the “agrarian origin of the nutrients” that have led to Mar Menor to the current crisis situation. Farmers and the Autonomous Government itself must put aside their "denialist" attitude and assume their responsibility: the former, for the spills made over decades; the second, for not controlling them and for “facilitating the breach of the laws”. And the same goes for the State, which has allowed a "generalized breach" in water management.

The project makes it clear that in order to recover the coastal lagoon, the current productive model must be changed, but for Martínez, the measures proposed for this are “scarce and weak”, because they do not include stricter legal limits to agricultural activity or concrete proposals. to eliminate illegal irrigation and convert intensive crops in other extensive, dry land and traditional terrace systems that prevented runoff and were able to absorb nitrates in episodes of torrential rains, preventing them from reaching the sea.

Of the 21 actions of the plan, four take more than half of the budget, about 300 million euros. These are hydraulic works of “end of pipe” and not of origin, which repeat the “failed” model that was launched in the 90s of the last century: large drainage infrastructure, irrigation and desalination management that had some use and maintenance costs so high that they did not start up. The irrigators would have to pay 29 million euros a year to maintain the proposed new infrastructures that, in the best of cases, with optimal operation, without breakdowns or breakages, would launch 2,125 tons of nitrates into the Mediterranean Sea every year. "It is a reckless project," warns the environmental leader, in addition to "hardly eligible" from Europe, which could even end up sanctioning Spain for those spills.

Martínez goes further and warns that the zero discharge plan confuses the management of nutrients so that they do not reach the sea with water management: the measures are more oriented to intercept water flows and derive new water resources to irrigation that to prevent the entry of nutrients.

The harsh criticism of environmentalists has come the same day that the regional government also faces the departure of four of the experts who were part of the Scientific Advisory Committee created in the summer of 2016 to analyze the collapse of the lagoon and propose solutions based on technical criteria These are the researchers of the Spanish Institute of Oceanography (IEO) Víctor Manuel León and Juan Manuel Ruiz; the professor of the Polytechnic University of Cartagena José Álvarez Rogel, and the biologist of the Center for Edaphology and Applied Biology of Segura (CEBAS-CSIC) Gonzalo González Barberá.

Last summer, four other scientists also left this body and in total, since its inception, 14 of its 51 initial members have left that advisory group.

The four scientists who are now leaving the committee signed at the beginning of September, along with eleven other colleagues, a very critical statement with the defense that the regional government was doing at the time of the recovery of the lagoon that, they said, was “far away "