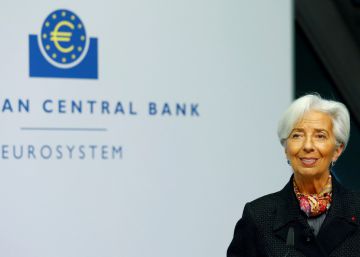 Several members of the Governing Council of the European Central Bank (ECB), in their meetings of December 11 and 12, “stressed the need to be attentive to possible side effects “of the negative types, according to the minutes published this Thursday. It was suggested that the liquidity created by the Eurosystem “should be carefully tracked with respect to its impact on banking intermediation and on stocks, housing and real estate, as well as capital outflows outside Europe in search of performance.”

In addition to this alert, which can be important if large capital movements are detected, in the December Council some members also admitted that the new injections of money to the market decided in September “had not yet had any visible positive effect, with expectations of longer-term inflation that historically remain at low levels and clearly below the ECB inflation target. “

The Governing Council, chaired by Christine Lagarde, decided that it will monitor “closely the evolution of inflation”, which remains below the objective, and the impact of the monetary policy measures that are developed in the economy. “However, the revision of Monetary policy planned by Christine Lagarde According to the governor of the Austrian central bank, Robert Holzmann, this review will begin next week.

Although rates below zero have not improved inflation, as intended, it can create more problems. Several members expressed “some concern regarding the potential impact of negative interest rates on households in the euro area, and savings and consumption dynamics also require close monitoring.” Another red light that has come on.

As for the stock markets, it was pointed out that they were being driven by the recent fall in risk aversion. As for the euro area, in the December 2019 projections, real GDP growth “was hardly revised compared to the ECB staff projections of September 2019: real GDP was expected to increase by 1, 1% in 2020, 1.4% in 2021 and 1.4% in 2022 “. The conclusion was that the risks surrounding growth prospects “remain downwardly inclined, but have become somewhat less pronounced and a moderate recovery is expected later.”

As for the growth of bank loans to non-financial companies, “it was slightly less than 4% in October, while credit to households reached 3.5% in October, with some differences between countries.” The ECB considers that the negative rates have had an effect on the prices of corporate loans, which stabilized at 1.56% in October, while The cost of loans for the purchase of homes by households was at the historical low of 1.44%.

Bank accounts suffered from this rate cut, but this pressure on margins “was offset by the favorable evolution of bank bond yields, despite recent increases.

On the other hand, the Governing Council concluded that the implementation of the segmented system of the ease of deposit rate had been smooth and had worked as expected. “It freed banks from part of their costs for maintaining excess liquidity, while preserving money market rates at low levels,” the ECB said.

In addition, although the net interest income earned by the banks for each unit of their assets had been compressed, the solid growth in intermediation volumes meant that the base for income generation would expand, “he adds.

Tags: advisors of the bce, ask for, Bank, capital, effect, europe, exit, inflation, kind, look out, negative, stimulus, to admit, to have, visible