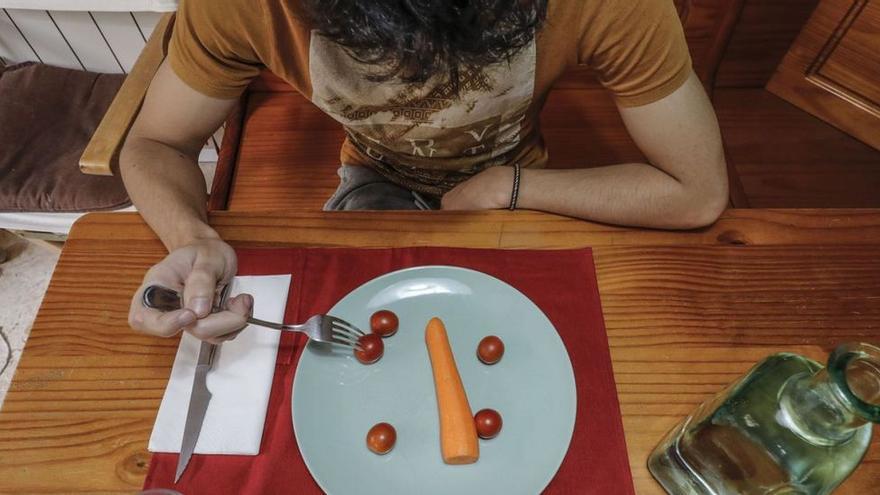 Eating disorders are diseases that sometimes put the life of the person who suffers them at risk. They are characterized by abnormalities in eating habits that can involve both insufficient and excessive food intakes and affect physical and emotional health. Young people between 12 and 24 years of age suffer the most and, according to the World Health Organization (WHO), it is a mental health problem that affects women the most.

Being highly perfectionist and demanding, reaching puberty overweight, advertising campaigns for countless weight loss products, social networks or living with a family concerned about image and appearance are factors that can predispose to this type of disorder, but yes We also add, according to experts, social isolation due to the coronavirus, anguish and fear of not knowing what will happen, changes in eating habits and overexposure to social networks, “we are facing a significant increase in cases.”

The doctor in psychology Yolanda Quiles works at the CREA center, specialized in the treatment of eating disorders located in Elche, details that since November 2020 «we began to notice an upturn in calls to receive advice and care for new patients ».

In her case, she is the first to meet with those affected and assures that “it is surprising that everyone repeats the same phrase: ‘this all started in confinement.’ During the months of total isolation, young people were the ones who changed their way of life the most, the ones who most closed in on themselves and the ones who took refuge the most in social networks, adopting in many cases behaviors that they copied from influencers. And it was after the summer of 2020 when “the signs of the disease began to become apparent to their environment,” says Quiles.

Weight loss, notable increase in physical activity, isolation, bad mood, concentration problems, insomnia, loss of menstruation … the list of symptoms is extensive, says Dr. Herminia Hernaiz, a specialist in clinical psychology. “You have to separate the emotional and behavioral, such as changes in behavior or obsession with weight or diets, with the physical, loss of size, fainting, feeling cold, sleep disorders …”.

Despite the fact that it is a mental health problem that mainly affects young people between 12 and 24 years old, experts differentiate between a first group that would go from 12 to 17 and a second from 18 to 24. According to The statistics that Hernaiz shuffles, since the beginning of the pandemic “there are a third more” of cases in the first group, while the increase in the second is around 35%.

Yolanda Quiles, based on the data of care in the CREA center, raises the increase in TCA to 50% and explains that in 2020 they received 70 requests for advice compared to “the 146 that we have in 2021”. Another outstanding figure is the age of what is known as “debut”, the onset of the disease, since “it was 14 years old and we are finding that it is going down to 12 years.”

This psychologist insists that “in 8 years we have not found such a high increase in cases” and assures that “it is generalized”, since “we have contacted other units and resources, both public and private, and they are the same as us” .

Obsessions to eat healthy and exercise have also increased, and in some cases have become an added factor in suffering from an eating disorder. “It is clear that eating healthy and physical activity promote health and well-being, but when these habits become an obsession they stop producing that well-being,” insists Herminia Hernaiz.

In recent times there is a lot of talk about eating foods that are not processed, without additives …, a “fashion” that has helped specialists to detect other types of problems, but which, according to Yolanda Quiles, has also caused ACTs become “camouflaged” and cost more to detect. An example is that “if your daughter asks you to prepare fruit for breakfast instead of a sandwich, you may think it is a healthy habit,” but in the end there may be a serious problem behind it, Quiles insists.

The WHO highlights that eating disorders continue to affect women to a greater extent. In the CREA center, according to Yolanda Quiles, “9 out of 10 patients are girls and 1 boy”, and it is that “in men the ideal of beauty is not so thin, they have it more associated with a muscular body.”

Despite the fact that anorexia is the best known disorder, Quiles assures that “bulimia is more frequent” and, sometimes, it takes longer to diagnose because “such a thin body does not exist”. The psychologist insists on the seriousness of this disorder, since people who suffer from it experience purging episodes that lead to “very serious problems in the digestive system.”

Returning to confinement, they were months of uncertainty and isolation in which, in most homes, people spent part of their free time cooking. Cocas, breads, cakes, pizzas and a long etcetera, mostly sweets, which caused a generalized weight gain. “My daughter has always practiced a lot of exercise, but lately she did not have time”, a factor that added to the physical change of adolescence and confinement “made her gain a bit”, details a mother who prefers to remain anonymous.

After finishing the confinement “he went back to playing sports and lost some weight, and what happens? Everyone told him how ‘beautiful she was’ and that stimulated him even more.” But also, having learned to cook while she was at home, “she made an effort to prepare the food and thus, without my knowing it, control her diet,” explains the woman.

From 58 to 40 kilos. That’s how drastic was the change that the young woman made in less than a year. “Deep down she knew that something was not right, because she wore loose clothing so that I would not realize how thin she was”, but no matter how much the young women try to hide the disorder, “in the end it becomes evident”, because “it came one moment when I saw that she was exercising as if her life depended on it, that she slept badly … “, but the trigger was that” I stopped having periods “.

The young woman came to admit to her mother that “she did not know what was wrong, that she was not feeling well and that she was afraid to eat” and immediately “I consulted the family doctor, who told me that it was anorexia or the beginning of anorexia.” This mother regrets that social security procedures are “slow”, despite the fact that it is essential to start treatment as soon as possible. In his case, he put himself in the hands of a psychologist and, although slowly, “he is improving a lot.”

Upon learning about her daughter’s problem, “I began to learn about other close cases”, in fact there were two more in the same group of friends, “but I also knew about the daughters of friends or acquaintances” and the most shocking thing “is that they all started to have problems in confinement, “he concludes.

Experts estimate that 35% more young people between 18 and 24 years have suffered eating disorders since the start of the pandemic, while the increase is one third between 12 and 17 years.

Of every 10 people who attend the CREA specialized center for eating disorders, 9 are women and 1 are men.

Detecting the disease in its early stages facilitates recovery

As in any disease, an early diagnosis implies a better prognosis. Experts insist that at the slightest suspicion it is necessary to turn to professionals, since it is “very important” to start treatment as soon as possible.

Doctor of Psychology Yolanda Quiles explains that a person with an eating disorder takes an average of two years to recover, a time that, she emphasizes, “depends a lot on each case” and on the phase in which the problem is detected. However, Quiles recalls that these types of disorders “are serious mental health problems” that in most cases require the help of different specialists, such as psychiatrists, psychologists and / or nutritionists.

Also Dr. Herminia Heraiz, specialist in clinical psychology, insists on the importance of “current immediately”, since consulting with specialists prematurely can even “avoid the problem.” The pediatrician or family doctor, depending on age, may be a first option. “They have resources to diagnose the disorder and refer other professionals if they consider it.”