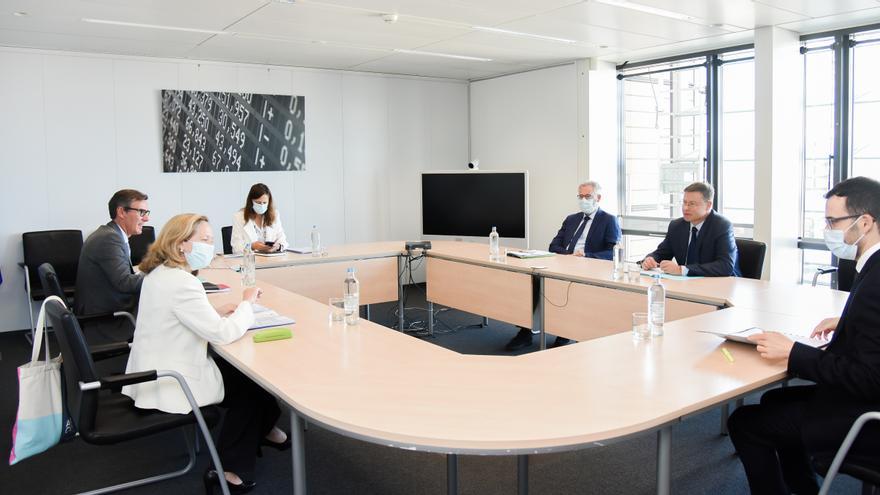 The conversations between Spain and Brussels are daily to elaborate the recovery plans financed with community money. It is not yet known how the blockade of Hungary and Poland to the anti-crisis funds and the community budgets for 2021-2027 will be overcome, but the exchange of documents between the European Commission and the Spanish Government is fluid with a view to receiving those 72,000 million in transfers and 68,000 in credits to finance the recovery in the years after the pandemic.

The money is not expected before the second semester of 2021, although the States will be able to finance previous expenses advanced. Spain has accounted for in the 2021 budgets, which have just been approved in Congress, some 27,000 million attributed to the funds.

But that money is conditional on reforms, linked to the green, digital transition and the recommendations by country of the European Semester – the economic governance mechanism of the European Commission -, which in the case of Spain often speak of temporary employment, duality the labor market, the sustainability of pensions and, in the last year, the shortcomings of public services evidenced by the health crisis.

In this sense, and by virtue of this daily contact, they have already given themselves records relating to four large blocks defined by the Government: “Building a greener Spain; a more digital Spain; a more egalitarian Spain and a more cohesive Spain”.

But what will those reforms look like? Is the European Commission imposing the meaning of these reforms? The Community Executive says that no: “In the first place, it is the Member States themselves that are drawing up the recovery and resilience plans,” the economic vice-president of the European Commission, Valdis Dombrovskis, answered this Monday in the European Parliament to the MEP of Catalonia in Comú, Ernest Urtasun ( Greens / EFA): “So in drafting our country-specific recommendations, the European Commission has become, shall we say, less prescriptive on policies, leaving the exact means to address these challenges to Member States. And that The approach we used in the semester is the one we are using in preparing recovery and resilience plans. ”

“We are also insisting,” Dombrovskis told Urtasun’s questions about the autonomy of governments to choose how to tackle reforms, “that when Member States prepare their recovery plans, they should consult with the social partners and with stakeholders. : plans are discussed internally “.

Urtasun intervened in the Joint Parliamentary Committee on the Economy and Employment, which discussed the autumn package of the European Semester 2021. The meeting was attended by, in addition to Dombrovskis, Paolo Gentiloni, Commissioner for the Economy; and Nicolas Schmit, Commissioner for Employment and Social Rights.

“We are holding meetings between the different ministries”, said a few days ago the economic vice president, Nadia Calviño, before the meeting of the finance ministers of the euro zone (Eurogroup): “With regard to the labor field, we have the will to modernize our labor framework. The approach that will be made to the European authorities will be to present this entire package of reform and investment actions that are going to be deployed through social dialogue “.

Labor understands that the legal framework will be repealed in its entirety de “facto” but that, given the complexity of creating an alternative regulatory body, the procedure will be approached in two phases. The first and most urgent, which affects the most damaging aspects, includes repealing the possibility of dismissal for absenteeism caused by sick leave (which has already been approved), the cancellation of the limitations of the temporary scope of the collective agreement and the suspension of the applicative priority of company agreements over sectorial ones.

However, according to El País, “The document Investments and reforms for a dynamic labor market, prepared by the Ministry of Economy and the Economic Office of La Moncloa, advocates the prevalence of company agreements over sectoral ones – in silver: less bargaining power for unions. It thus dilutes the coalition pact and has caused a clash between the Economy and Labor, in addition to unrest in the unions. ”

And in this matter, among others, the file related to the reform of the labor market has not been closed, which will not be sent to Brussels until there is an agreement with “the different ministries”, that is, Labor, mainly; and until it has the approval of the social agents, as Dombrovskis claimed this Monday, beyond the document Investments and reforms for a dynamic labor market, which does not have the necessary consensus within the Government to be sent to the European Commission.

“At the moment we have not entered to talk in detail about issues related to the workplace,” acknowledged Calviño, while they are not yet closed with the rest of the ministers and social agents, “beyond what the European Commission already knows with regard to the intentions of our government and our determination to address this package of modernization of the labor market in the context of social dialogue, an aspect that, by the way, the European institutions value very positively. ”

Regarding pensions, Although in the past the economic vice president has expressed her opposition to binding by law its revaluation, the commission of Toledo Pact has approved measures, widely supported by Congress, such as the revaluation of pensions based on the CPI and the review of early retirement, which will serve as a guide for the coalition government to carry out the reform of the public pension system. After confirming this political pact, the Executive intends to reach another agreement with the unions and the employers, so that the new legislation also has the approval of social dialogue.

“The European Commission has been making recommendations to Spain about pensions for years,” said Calviño before the Eurogroup, “and is analyzing together with us the different figures, the different forecasts, the impact on the pension system as well as on the public budget and by both the fiscal impact of the different measures that are going to be implemented. And that analysis is taking place in a tremendously constructive environment. ”