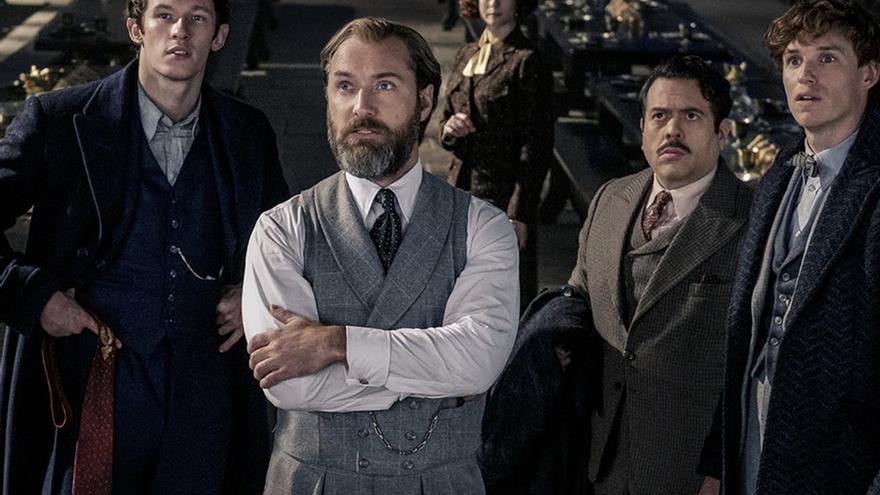 In one of the most emblematic moments of the series Paquita Salas, the actor's representative says that one of her clients in El secreto de Puente Viejo has been rejected for having "too much pen". Ironically, the character played by Brays Efe he said that "that was 'Puente Viejo's secret,'" homosexuality. It is curious that JK Rowling has decided to headline the new installment of Fantastic Animals like Dumbledore's secrets, precisely when much expectation was focused on seeing if the powerful wizard finally told his homosexuality.

The writer has told in various interviews that the character is gay, but not in all the Harry Potter movies Not even in the first two installments of Fantastic Beasts had there been any mention of his sexual condition. Four years later, this new film arrives confirming that Paquita Salas is always right, because one of Dumbledore's secrets was her homosexuality and her romantic relationship with Grindelwald, the villain who changes his face. The controversy made Warner Bros decide to eliminate Johnny Depp and sign Mads Mikkelsen, a wise choice since the actor is one of the few things that are saved from the film.

The Dumbledore played by Jude Law —undoubtedly the best of the entire film— is the absolute protagonist of this installment, and his past, one of the mysteries that are revealed. His sexual identity is addressed from the first scene, a meeting between the two magicians where they openly discuss their romantic relationship. This issue will be addressed several more times, with the final showdown leading to one of the few visually imaginative and exciting scenes in which they both listen to their hearts as they fight.

It is one of the few redeeming features of a long film (almost two and a half hours), boring and, above all, ridiculous. There is no narrative logic in the script. Things happen in a hasty, meaningless way. The scenes follow each other without any order, without one leading to the other, without any dramatic construction, without generating tension. It's confusing. The characters appear and disappear without rhyme or reason. An attempt is made to explain this chaos, which is embarrassing: since the villain can see fragments of the future, he must be disconcerted. Those who are disconcerting are the spectators, since the protagonists spend more than half a film making decisions that nobody understands. Showing up in places where they know they're going to be ambushed.

Script twists are arbitrary. In one of the 'adventures' of the protagonists, four of them go to a dinner where the authorities decide to arrest one of them, leaving the others free without any explanation. In another, a bunch of enemies make two characters surrender, but 15 minutes later they're seen wielding their wands and fighting as if nothing had happened. Everything to chain a succession of action set pieces that are supposedly spectacular, but that occur in the midst of so much chaos that it is impossible to feel any emotion. Epic isn't just about a great bill or lavish production design. The epic is built, and here it does not exist. It is significant that the most emotional moment of the film is when the music of John Williams for the Harry Potter saga is played.

There is a moment, halfway through the footage, that is the perfect summary of the film. After a thousand adventures, traveling to a thousand places, losing several allies along the way and no one understanding why they have done anything, they all meet at Hogwarts and ask where their plan is. "Worse than in the beginning," says Dumbledore. And that's where the movie really begins. Everything that has happened up to that point is expendable and an excuse to lengthen the duration and fill in a story that has no consistency, written by JK Rowling herself.

The Harry Potter saga ran like clockwork for its ability to create an original world, an adventure for the whole family full of magic, humor and lots of fun. Even the worst deliveries were seen with a smile and there were always surprising images. Instead, here everything smells like a repeated formula. To creatures made on autopilot. The humor sounds too childish, there are no spells, no charismatic characters (Eddie Redmayne is still very affected as Newt Scamander). There is a scene where Scamander and his brother dance to enchant some scorpions that borders on the absurd, it seems conceived for five-year-olds (at most).

An infantilization that contrasts with the background of the story, which warns about populism, extreme right-wing leaders and everyone's responsibility to not let them sink in and spread. It's a shame that all this is buried and that the necessary time is not dedicated to developing this idea and deepening the love relationship between Dumbledore and Grindelwald, which in its two notes arouses more emotion and enthusiasm than the rest of the film.